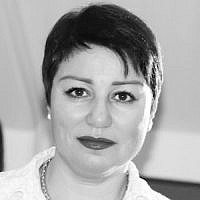 The Blogs
Avideh Motmaen-Far
Apply for a Blog
Please note that the posts on The Blogs are contributed by third parties. The opinions, facts and any media content in them are presented solely by the authors, and neither The Times of Israel nor its partners assume any responsibility for them. Please contact us in case of abuse. In case of abuse,
Report this post.

On the 28th anniversary of the mass execution of the political prisoners in summer of 1988, it is apparently still not considered time for those responsible to be held accountable. Although Ayatollah Montzaeri had already published his memoirs in 2000, revealing shocking details about the massacre of the political prisoners in summer of 88 and the brutality of Khomenei, the Iranian regime has always denied it. Even when lately, a recording of Ayatollah Montazeri’s meeting with the “death commission’’ was released forcing the authorities to acknowledge the massacre, the actual minister of Justice who was then one of the members of the ”death commission” publicly announced that he is proud of his acts because he has been doing God’s will.

The killing machine of the Islamic Republic of Iran which had already began since the very first day of Khomeini’s reign in 1979 on the roof top of a school in Tehran, is continued to this very moment I am writing this blog.

But of course it reached its apogee by the end of summer of 1988. During that bloody summer, in less than two months, the Islamic Republic of Iran slaughtered the political prisoners according to a decree issued in July 1988 by the Iran’s Supreme Leader Ayatollah Khomeini demanding to “Annihilate the enemies of Islam immediately! … Those who are in prisons throughout the country and remain steadfast in their support for PMOI are waging war on God and are condemned to execution…It is naive to show mercy to those who wage war on God.”

To execute his order, Khomeini assigned a commission of 3 individuals: A representative of the Ministry of Intelligence, a religious judge and a prosecutor, known today as “Death Commission”. The so called trial composed of basically two questions aimed to determine whether or not a prisoner was an Enemy of God, or the inmate had any allegiances to the PMOI/MEK.

Ayatollah Hossein-Ali Montazeri was the only cleric and member of Khomeini’s trusted circle who strongly protested these mass executions and called for a moratorium, but Khomeini blinded by abhorrent hate, insisted to show no mercy and ordered even teenagers and pregnant women to be put to death immediately. Ayatollah Montazeri fell of course from Khomeini’s grace and was sacked in March 1989.

As a result, the Iranian regime summarily and extra judicially executed tens of thousands of political prisoners held in jails across Iran. By the end of summer 88 more than 30,000 political prisoners, the overwhelming majority of whom activists or only supporters of the People’s Mojahedin Organization of Iran (PMOI or MEK), along with other activists were executed. Most of those executed were either already serving their prison sentences or had finished their sentences but were still kept in prison. Some others had previously been imprisoned and released, but were again arrested and executed during the massacre.

In 2008, on the 20th anniversary of this massacre, Amnesty International called once again for those responsible to be held accountable, stating “there should be no impunity for such gross human rights violations, regardless of when they were committed.”

In 2013, a group of Iranian Canadians brought this matter to the Canadian Parliament. The Canadian Federal Parliament courageously adopted an unanimous consent motion on June 5 2013 recognizing this massacre as “Crime against humanity’’ and condemned it under International Law. Canada also established September First as the Solidarity Day with the Iranian political prisoners. Up to this date Canada is the only country in the world to have recognized the “prison massacre’’ in Iran as a crime.

The Iranian regime continues to be proud of the 1988 execution of political prisoners and none of the perpetrators have yet been brought to justice.

It is interesting to note that even the new so-called “moderate” President of Iran, Hassan Rouhani, was at the time of the massacres, Deputy Commander-in-chief of Iran’s armed forces. He has been also member of regime’s Supreme Defence Council since 1982. It would be extremely hard to believe he was not fully aware of these crimes. His silence about it still today proves that he has been in full conformity with it. Not to mention that one of the “death commission” members is now minister of Justice in the cabinet of President Hassan Rouhani.

The Islamic regime of Iran has tried of course to destroy evidence of this crime multiple times. That is the reason why Amnesty International called on “the Iranian authorities to immediately stop the destruction of hundreds of individual and mass, unmarked graves in Khavaran, south Tehran, to ensure that the site is preserved and to initiate a forensic investigation at the site as part of a long-overdue, thorough independent and impartial investigation. ‘’

On the 28th anniversary of one of the most horrendous crimes against humanity since World War II, it is long overdue for those responsible to be held to account. Iranians in general and families of the victims in particular, deserve justice and truth.

About the Author
Avideh is a Belgian-Canadian citizen of Iranian descent. She holds a D.O. Degree since 2000 (The Belgian School of Osteopathy, Belgium). She has also studied at the Ecole de Journalisme at the Free University of Brussels, Belgium and is a graduate of The Art Institute Of Toronto. She has been volunteering in producing radio programs for Radio Koocheh on medical and medico social issues for 4 years and continues to write and blog.
Related Topics
Related Posts
Comments