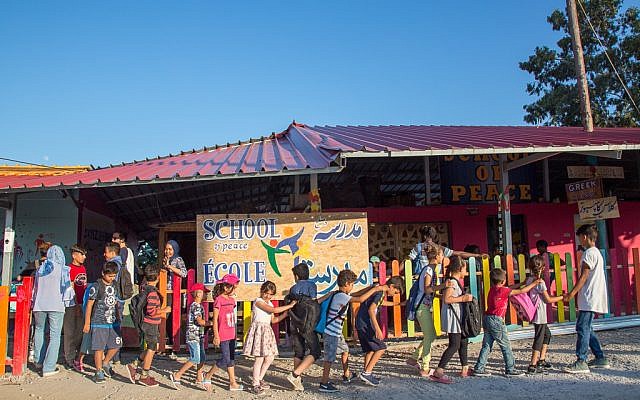 School of Peace for refugee children in Lesbos, Greece. (Courtesy of Lisa Kristine)

Wish me a mazal tov because we just finished happily hosting loads of relatives for our daughter’s bat mitzvah! While she had been busy planning her Torah portion and dvar torah (Did you know that Harry Potter and Moses have much in common?), I had been busy planning the celebration and tour portion of the visit (Did you know that you need to overorder on the alcohol for these occasions? Everyone here will always underestimate the drinking talents of your American relatives). Now we can focus on the next stage of the process — the bat mitzvah project.

As many of you know, a bar/bat mitzvah project is when b’nai mitzvah kids select a nonprofit that they are particularly passionate about, often to raise awareness about its work, engage in volunteer opportunities and encourage charitable donations. It is part of marking the child’s transition from being taken care of to taking care of their own communities and beyond.  Rites of passage — as we see in so many cultures — often help guide youth to begin thinking about how they can put their own stamp on the world. As parents, we do our best to make sure that this process is meaningful for our kids.

With suggestions from my daughter’s older American cousins, along with other thoughts from our friends, we had many ideas to offer her. One that we considered was from my friend Danny Hakim’s family. Both of Danny’s daughters, especially moved by the refugee crisis in our region, decided to raise funds for IsraAID, an Israeli-based humanitarian aid NGO. Since 2001, IsraAID has responded to humanitarian crises, providing emergency response and long-term development assistance around the world.  For their bat mitzvah projects, Danny’s daughters focused on the efforts of the School of Peace, which provides education for refugee children in Lesbos, Greece.  The whole family also visited the school as part of their charitable commitment.

And the story of the School of Peace? Because of the Syrian civil war and the political instability of so many nearby countries, thousands of refugees from Syria, Afghanistan, Iraq, Iran and the Congo have streamed into Greece in recent years.  Recognizing the dire needs, a variety of Israeli initiatives have provided medical assistance, food, clothing, and other basic necessities to refugees in the region. Since 2015, IsraAID has been operating in Lesbos, home to the largest refugee camp in Greece, providing emergency medical care and mental health support and services. To address the needs of thousands of refugee children, Jewish and Arab educators from Israel established the School of Peace in partnership with IsraAID, in 2017. Aiming to provide a place of hope and stability for kids who already lost so much, these educators — from the Israeli Hashomer Hatzair youth movement and the Ajial Movement of Arab Educators — built on their own history of collaborative work in Israel. The Israeli volunteers are working with refugee teachers, including Muslims, Christians, and Yazidis from the students’ own communities, to provide education in Arabic, Congolese French, Farsi, and Kurdish. It is the only school on the island where refugee children can get a quality education in languages they understand, with teachers from their own communities who share their culture as well as the psychological impact of displacement. 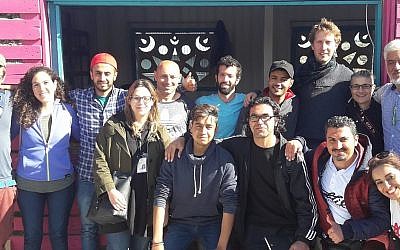 Staff members from Syria, Iran, Afghanistan and Israel at the School of Peace (Courtesy of HaHashomer Hatzair).

It was no surprise that Danny was able to help identify meaningful projects for his daughters.  An international karate champion, he established in 2004 the nonprofit Budo for Peace, which uses martial arts to teach values of social cohesion and empowerment, training youth from every sector of Israeli society as well as from around the region.  With his family’s involvement in IsraAID, he brought martial arts facilitators to Lesbos several times to teach refugee children at the School of Peace. But you don’t have to be an international karate champion to engage your kids in social action. 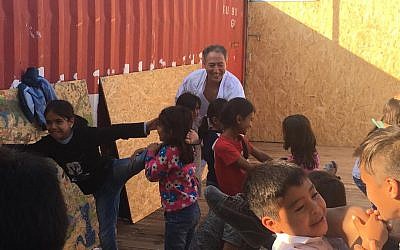 Danny Hakim providing martial arts training to children at the School of Peace in Lesbos, Greece (Courtesy of Budo for Peace)

IsraAID, which has expanded its humanitarian assistance programs to reach 49 countries, has gathered experience over the years in introducing concerned youth to challenging situations around the world. Together with b’nai mitzvah kids and their parents, IsraAID has developed a range of bar/bat mitzvahs projects in recent years. Examples include youth who have handsewn bags to raise money for water filters in Puerto Rico after Hurricane Maria in 2017, engaged in advocacy for communities in Nepal affected by the earthquake in 2015 and run races to fund the needs of refugee camps in Kenya.

As for my daughter and the rest of our family, we still have lots of homework to do before she selects a project. While the needs are overwhelming, we can be heartened by the activism of these young people and many adults as well who are working to create a better future for all of us. My daughter, while partial to solar energy projects in Kenya right now (thanks to a visit to the Arava Institute), is also thinking about other possible opportunities to make a difference.  And whatever she picks, I am one proud mom.