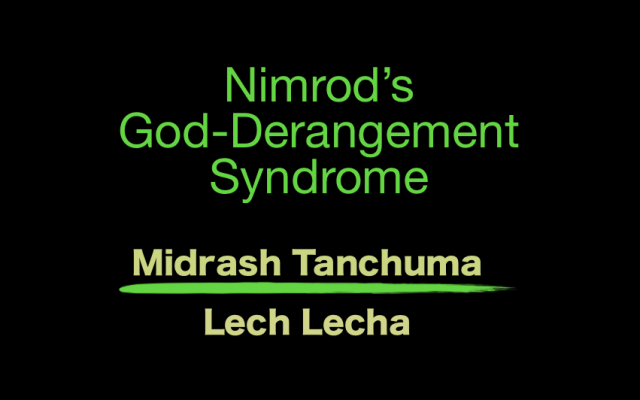 Midrash Tanchuma shows how events in Avraham’s life foreshadowed events in Jewish History. The following examples should sound familiar: Avraham was told to go to the “Promised Land.” Suddenly, he had to take his family down to Egypt because of a famine. Sarah was taken against her will. Pharaoh was struck with a plague until  Pharaoh finally let Sarah go.

The Midrash offers another subtle but fascinating example:

Crime legitimized by an ideology

When Avraham came to Egypt his wife was forcibly taken to the palace because  “she was very beautiful” (Genesis 12:14). When the Jews came down to Egypt they were enslaved because the Jews will surely be a ‘third column’ who “will join our enemies” and try to expel us from our land. (Exodus 1:10) What do these two incidents have in common?

The Midrash seems to be offering an insight into the nefarious legal system of ancient Egypt where crimes such as kidnapping and slavery were justified by codifying them as official government policies.  A beautiful woman simply cannot remain among the commoners. She automatically becomes the legal property of Pharaoh. Enslaving a large group of vulnerable foreigners is “legally” justified by classifying them as a  security risk.

The first World War against the first Jew.

Perhaps there is another, more disturbing case of Jewish history repeating itself. Our parsha describes what is, in effect, mankind’s first world war between 4 kings and 5 kings. What drove the 4 kings to wage war? Surely greed and power. However, Midrash Tanchuma makes reference to a very different motivation that is spelled out in the commentators. It seems the driving force behind the war was one man named Nimrod. Although his name may now be synonymous with fine Israeli footwear, the simple meaning of his name tells a very different story. Nimrod literally means “let us rebel.” He was on a maniacal, personal crusade against God and the object of his hatred was one man who was trying to spread the idea of monotheism. As a ruthless warrior Nimrod loathed all the core principles that  Avraham stood for – Mankind striving to live an exalted life full of loving kindness. A single benevolent God runs the world and seeks a personal relationship with each person.

Nimrod’s plan was to attack Sodom because that’s where Avraham’s nephew, Lot, was residing. By conquering Sodom, Nimrod hoped to draw Avraham into the war so he could put an end to the man and his movement once and for all. Nimrod’s calculation proved to be correct. Avraham indeed embarked on a military excursion to save his nephew. However Nimrod made one huge miscalculation. He could not fathom that this God that Avraham claimed ruled the world – indeed ruled the world.

Hitler’s involvement in the Second World War seems quite similar to Nimrod’s motivation for joining in the very first world war. Just like Nimrod was driven by a master plan of genocide, so was Hitler. They shared an obsession with waging war against the Jews and Judaism’s moral principles which they loathed.

This is how Wikipedia describes Lucy Dawidowicz’s famous book on Nazi Germany, The War against the Jews: “Hitler conceived his master plans, and everything he did from then on was directed toward the achievement of his goal,… of annihilation” as he wrote in Mein Kampf back in 1924.

In terms of history repeating itself, Germany, like ancient Egypt, enacted laws against the Jews which justified stripping Jews of all personal freedoms and protection under the law. Ultimately, the genocide of Jews was also a natural outgrowth of a carefully crafted ideology.

Perfume in a cemetery

It is clear from the Midrash that God was “waiting” for Avraham to arrive on the scene. His religious curiosity, relentless pursuit of truth and his generous spirit would change the world.

The Midrash describes Avraham embarking on his mission with an unusual phrase   “Perfume in a cemetery.” After all, Avraham  discovered God on his own and developed his religious beliefs in a country, a society  and a home full of  paganism. That’s why God ordered him to “depart”  this toxic environment where, like “perfume in a cemetery,” his groundbreaking religious beliefs could not possibly be appreciated.

The few against the many

Although vastly outnumbered, Avraham was able to vanquish the victors of the world war. This too reverberated throughout Jewish history from the Chanukah story to the founding of the State of Israel.

Once again, Avraham was laying the groundwork for Jewish destiny.