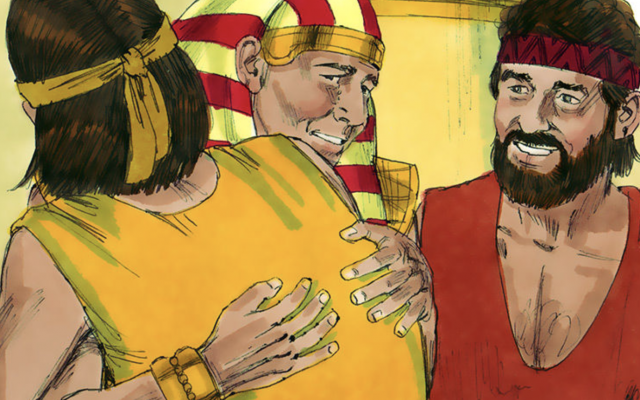 In order to shed light on Joseph and his interpretation of Pharaoh’s dream, The Midrash launches into the story of another powerful leader who had a dream – Nebuchadnezzar, king of Babylonia. As recorded in the Book of Daniel, Nebuchadnezzar forgot his dream, yet he insisted that his advisors not only interpret it but tell him what it was in the first place. In fact, Nebuchadnezzar could not bring himself to admit that he forgot his dream. He claimed that the reason he would not tell his advisors the dream was that they will be more likely to misinterpret it. In desperation they said something they highly regretted. Exactly what Nebuchadnezzar did not want to hear:

“While the Temple stood, a man could go to one of Aaron’s descendants to consult the Urim and Tummin (The special breastplate of the High Priest) for answers to their questions, but now there is no Temple and no Urim and Tummin to consult.”

To put it mildly, Nebuchadnezzar did not react well to this news that his only hope of remembering and interpreting his dream went up in flames along with the first Temple in Jerusalem.

“Nebuchadnezzar retorted: ‘Obviously, the Temple must have been an extraordinary edifice, yet you advised me to destroy it.’ He became infuriated with them and declared: ‘Let all the wise men of Babylon be eliminated.’”

If you’ve ever worked in a big corporation you will recognize this underhanded, political, move. Nebuchadnezzar was the one who ordered the destruction of the First Temple in Jerusalem. But now that his advisors told him that it was the only place in the world where you can access divine truth, he needed a scapegoat. It can’t be Nebuchadnezzar’s fault that the Temple was destroyed. He must have gotten bad advice.  So, naturally, he ordered all of his advisors to be put to death.

The story has a bizarre but happy ending. The Prophet Daniel was one of the king’s advisors. He promised the king both the dream and the interpretation in 24 hours. After praying for Divine inspiration Daniel delivered on his promise. The king was so impressed that he declared Daniel a god. Daniel refused this designation and was able to talk the king out of it.

Blame others vs. giving credit to others

Why does the Midrash bring the story of Nebuchadnezzar? Perhaps to help us appreciate the utterly unconventional manner in which Joseph interpreted Pharaoh’s dreams. Consider these 2 verses from our Parsha:

If Joseph had a media coach he would have been told: “You get your one shot in front of the most powerful leader in the world. If you make yourself look brilliant you can get out of jail and maybe land a good consulting gig. This is not a time to talk politics or religion. Don’t say that your power is coming from some other god. Pharaoh already has plenty of gods. He thinks of himself as a god.”

He refused to take credit for divine powers that were not his. He told it like it is. Just the opposite of  Nebuchadnezzar who considered himself to be all knowing and infallible. So he lied to cover up his bad decisions and blamed everything on his advisors.

An unheard of notion in politics – rise to power through humility

What was G-d’s reaction? Joseph was elevated to Viceroy of Egypt.

“Because he ascribed greatness to the Master (of the world)  the Holy One, Blessed Be He, said to him: ‘Since you did not seek to exalt yourself, be assured you will be elevated to greatness and leadership by Me.’”

According to many commentaries, throughout this Parsha,  Joseph is setting traps for his brothers  to see if they express remorse for selling him into slavery. Joseph also wants to see to what lengths his brothers will go to protect Benjamin.  After all, Benjamin, like Joseph, was a half brother – a son of  Rachel.

Given all that, this statement of Midrash Tanchuma may seem unusual:

“Joseph saw his brothers and recognized them, but they did not recognize him” (Genesis 42:8), for they had felt no compassion for him, while Joseph recognized them because he pitied them.”

According to the Midrash, Joseph was able to (lehakir) recognize/sympathize with their pain but they were never able to see his pain. Perhaps what the Midrash means is that Joseph saw the complexities of the situation and that it was not black on white. When he was a kid he came off as haughty. The message of his dreams was threatening and hurtful to his brothers. It sounded like Joseph wanted to be the only tribe through which the Jewish People would emerge. All the other brothers would be disinherited. Joseph now understood all this and was willing to forgive them. The brothers, on the other hand, did have remorse, but perhaps they never were able to (lehakir) recognize/sympathize with the complexities of Joseph’s childhood. Perhaps they could not appreciate what it meant to be a “dreamer of dreams.” Not ordinary dreams. Vivid dreams like those of Pharaoh and Nebuchadnezzar. Dreams that you cannot suppress. Dreams that will change Jewish Destiny whether they make people uncomfortable or not. The brother’s heard boasting but they failed to detect prophesy. Jacob was also taken aback by Joseph’s declaration that his father, mother and  brothers would all bow down to him. However, Jacob had an additional reaction as the verse states: “And his brothers were jealous but his father took note of what happened.” (Genesis 37:11) The illustrious Biblical Commentator, Rashi, points out that Jacob anticipated the fulfillment of the dream. Jacob “recognized” it for what it was.

Midrash Tanchuma brings out another fascinating character trait of Joseph. Although the famine reached far beyond Egypt, Pharaoh wanted to keep the grain in the store houses and not distribute it to anyone he deemed to be an outsider. Maybe Pharaoh wanted to keep the grain for his troops or just for his nation. Either way Joseph’s  philosophy prevailed. He saw the storehouses of grain as a way to fulfill a noble mission of saving the world from famine:

The punishment that merited reward

Finally, Midrash Tanchuma shows us how the story of Joseph and his brothers sometimes blurred the line between good and evil.

The Midrash says that when Joseph’s goblet was discovered in Benjamin’s bag, his brothers were so anguished that they performed the ritual of mourning, (“kriya,”) tearing of their garments.  Of course, Benjamin was not actually in any danger because it was just the latest in a series of events that Joseph manipulated in order to test his brothers. The Midrash says that the brothers experienced this torment and tore their clothes for nothing as a punishment for what they did to their father. Jacob was put through the agony of thinking that he lost a son. When in actuality, Jacob too tore his clothes for nothing. The punishment fit the crime.

Yet, even as the brothers were punished, they were also rewarded. After all, tearing their garments was an act which showed great caring and concern for their brother Benjamin who now stood accused of stealing a goblet from the Viceroy of Egypt. For this act of brotherly love, G-d rewarded them with yet another act of (“kria”) – tearing a garment, thousands of years later. In the story of Purim, when Mordechai – a descendant of Benjamin –  tore his clothes upon hearing Haman’s plot to murder his fellow Jews.

From the perspective of Midrash Tanchuma, our Parsha is a quilt made up of many tests – Joseph testing his brothers and G-d testing Joseph and his brothers.