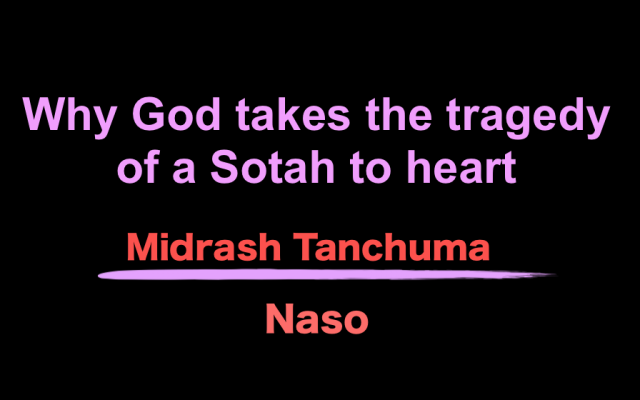 Let’s start with the breach of trust. This is how the Sotah is described in our Parsha:

From the start, the Midrash sees it as a double betrayal:

“[The verse is repetitive] “If a man, any man” to teach you that she is going astray and being false with two [who are described as a man]: with God who [in the story of the Exodus] is described as the “Man of war” (Exodus 15:3) and with a man (her husband)”

God and the suspecting husband

The chapter of the Sotah starts with a husband suspecting that his wife was alone with another man. The husband is described with the term “Kinei” קִנֵּ֥א which means jealous or zealous.

God is described in the Ten Commandments with the very same word:

The Midrash Tanchuma further notes that the root word “kina” is in fact used twice to describe the husband of the Sotah:

“And the husband is gripped by a spirit of jealousness (kina) and suspects (kinei)  his wife.” (Numbers 5:14)

It seems that her act has aroused two jealousies:

Being unfaithful is denying the existence of God

As you might expect from the comparison of jealousies, the Midrash sees adultery as a violation of the first of the Ten Commandments as well:

“Regarding the first commandment of “I am the Lord your God” [the implication is] that whoever commits adultery with someone else is equivalent to denying the existence of God.”

It’s interesting that the Midrash switches from the Sotah, to a man committing adultery with a married woman. Perhaps because our Parsha is dealing with a Sotah the Midrash wants you to know that  God feels the same betrayal when a man is unfaithful to his wife.

Why is adultery considered  like denying God’s existence more than violating any other precept in the Torah? Perhaps it is the element of deception as the Midrash will elaborate on.

The brazen assumption of the Sotah and the man she’s with is that they can get away with it. Nobody’s watching.

“It is comparable to an architect who is also the tax collector of a certain province. The inhabitants began hiding their silver and gold in hidden spaces. The architect said to them, ‘I built the province, and the hiding spaces. Can you possibly hide [anything] from me?’ Similarly, the Holy One Blessed Be He, said to adulterers, “You’re  hiding yourselves from me?”

Another case of sneaking in the night

A similar idea can be seen in the Talmud which differentiates between the armed robber who brazenly steals in broad daylight. He receives a less severe punishment than the thief who steals in the cover of darkness. The armed robber must return what he stole while the thief must pay double:

“Rabban Yoḥanan ben Zakkai was asked by his students: Why is the Torah stricter with a “ganav” (someone who steals at night or in a concealed manner) than the “gazlan” (someone, like an armed robber, who steals in broad daylight)? (Talmud Babakama 79B)

The answer is that at least the armed robber was consistently brazen in that he doesn’t fear people or God. That’s better than the thief who waits for nightfall so no one will see him. No one except for God.

The worst kind of adultery

The Midrash makes a surprising statement:

“When a woman is alone with her husband, having relations, but in her heart she is thinking about another man that she saw in the street, this is the worst kind of adultery.”

The fact that she is thinking about a man “she saw in the street” sounds like a purely physical attraction to someone she hardly knows. Or may not know at all. But why is it worse than actually cheating on her husband? What is the Torah’s perspective on a wife, or a husband for that matter, committing adultery in their thoughts?

God’s perspective on the sanctity of marriage

Despite the Netflix series “Unorthodox,” Jewish law’s primary concern is about the wife’s pleasure and consent. Thinking about someone else while having relations with your spouse is codified as a grievous sin.* It is not an offense that’s punishable in a Jewish court of law. For one thing, it would be impossible to prove. But that doesn’t mean it goes unpunished. In Deuteronomy God’s role is described as   “Whatever is done in secrecy is the concern of the Lord our God;” (Deuteronomy 29:28) The classic commentator, Rashi, on that verse says:   “I (God) punish for that which is done in private.” That goes for the person having relations with one while thinking of someone else. It also covers the parallel of idolatry. For example, someone practicing Judaism but secretly worshiping another god.

We have established that “the worst kind of adultery” does not go unpunished. But why did the Midrash bring up this case in relation to the Sotah? On a practical level the Sotah seems like a good candidate to be thinking about another man while she is with her husband. On a deeper level, perhaps the Midrash is seeking to provide a divine perspective on love and marriage.

There is a famous dictum from our sages: “Rachmana Liba boiy.” Meaning, in addition to your intellect and your good deeds, “God wants your heart.” It would be abhorrent  to God for someone to go through the motions of practicing Judaism while practicing idolatry in their heart.

Yet, in a world where the sanctity of marriage has been diminished, God wants us to know that it’s just as important to God that our spouse have our heart as well.

*Although no punishment from the court is listed, it is codified in Shulchan Arukh, (Orach Chayim, 240:2-3) and it’s listed among nine conditions under which a man is prohibited to have relations with his wife. The list includes when she is unwilling, when he is drunk, and when he hates her. If he persisted in having relations, he is referred to as “someone who is rebellious against God and someone who sins on purpose (knowing that it is prohibited). The source is Talmud Nedarim 20B.