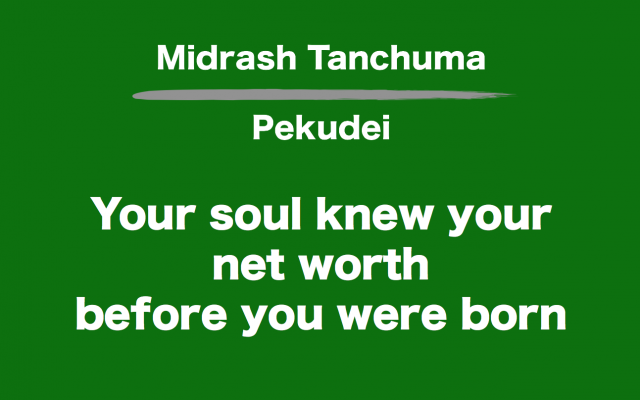 If it wasn’t for Midrash Tanchuma we would blissfully read the first verse in our parsha without realizing that the opening five words of the Parsha contains two anomalies.

“These are the accountings of the Mishkan (Tabernacle), the Mishkan of testimony…” (Exodus 38:21)

Midrash Tanchuma analyzes why the word “Mishkan” is repeated twice and what exactly is the “Mishkan of testimony” testifying to.

The Mishkan has a heavenly twin

The repetition of the word “Mishkan” refers to the fact that there is one Mishkan on Earth which is connected to another Mishkan in the heavens. This duality brings with it a set of expectations and consequences. It’s like a monitoring station on Earth sending real time feedback to a heavenly court. Yes, G-d is dwelling in the Mishkan on Earth, but because there is a heavenly Mishkan, it means that everything done on Earth has spiritual ramifications above. This duality will explain why the Mishkan is called the “Mishkan of testimony.”

The Mishkan as divine collateral

According to the Midrash, the Mishkan’s characteristic as a “Mishkan of Testimony,” brings with it both positive and negative ramifications. As we mentioned in Midrash Tanchuma’s  summary for last week’s Parsha, the Mishkan “testifies” to the world that G-d has forgiven the Jewish People for the sin of the Golden Calf. However, should we fail to follow the Torah that was given to us, the Mishkan will also “testify” against us. If our misdeeds are of a magnitude which brings us severe punishment, the Mishkan takes on an entirely new and critical role that was embedded in it from its inception. The “Mishkan” becomes a “Mashkon” – the Hebrew word for collateral. This dimension to the Mishkan (and the Temple of Jerusalem) was activated under the most dire circumstances. Namely, during the destruction of the First Temple (by the Babylonians) and the destruction of the Second Temple (by the Roman Empire). This is when G-d collected on his collateral.  As Midrash Rabbah on the Book of Lamentations says:

“The Holy One, blessed Be He, “poured out his anger” on wood and stone (of the Temple) and did not “pour out His anger” on Israel. (Eicha Raba 4:14)

When G-d allows the Jewish People to survive while his home (the Temple) is destroyed, that’s how G-d collects on his collateral. As the Midrash Tanchuma states:

What happens if we bring punishment upon ourselves and we no longer have a Temple as collateral? According to Midrash Tanchuma, Abraham was given a choice as to what will happen to his offspring in such a situation. Abraham chose exile over the alternative – ”Gehenom” – a place where souls are cleansed. So here we are, 2000 years later and we are still living out Abraham’s choice. According to Midrash Tanchuma, even G-d agreed that it was the wiser choice.

Your soul knew it all

At the time of conception, a soul has already been assigned to the new life in the making.  That soul is briefed on many physical characteristics that it will have. This is a package deal with no options. Except, of course, the free will to be a good person or a bad person. The soul learns the entire Torah and is taken on a world tour of the righteous and the wicked. The path forward is abundantly clear. Only one problem. The instant before birth, all is forgotten. It’s enough to make any soul cry.

“G-d summons the angels of pregnancies, called Lailah, and after a couple has relations  G-d reveals the entire fate of the drop: male or female, weak or mighty, poor or rich, short or tall, ugly or beautiful, fat or skinny, humble or haughty. Only whether it will be righteous or evil is left to the free will of each person.”

And once we are born, the Midrash describes 7 stages of life. Everyone starts out like a  king because as a baby we are carried around, and our parents tend to our every need. In a later stage we are compared to a donkey, because we have to work hard to support our family. The last stage, old age, is compared to a monkey because as we get frail and forgetful, some people laugh at us. Of course, how much reverence or ridicule you receive in old age may depend on what you made of your life.

We started out with the concept that there was a duality to the Mishkan. It testifies for us and against us. At the end it saves our lives  by taking the brunt of G-d’s anger over our sins. A human being is also a duality of body and soul. The Midrash brings another case of duality. A duality of purpose. The mirrors that Jewish women used to seduce their husbands in the field after the Egyptians outlawed marital relations at home. When women brought these mirrors as a donation to the Mishkan, Moses thought that those mirrors reflected vanity and had no place in a house of G-d. But Hashem told Moshe that He cherishes those mirrors because they reflect the amazing self sacrifice that Jewish women made in bringing children into the world, despite the horrors of slavery. The mirrors were used to make the basin in the Mishkan.

It’s making an effort that counts

The Mishkan provided yet another crucial lesson in life. After all was said and done, no one could actually put the Mishkan upright. Not the Kohanim or Levites or even Bezalel who designed it. Moshe himself got frustrated until G-d informed him that as long as he puts in the effort, the Mishkan will (miraculously) stand on its own.

Clearly the message of Pekudei, according to the Midrash, is that if we try our best, G-d will take care of the rest.