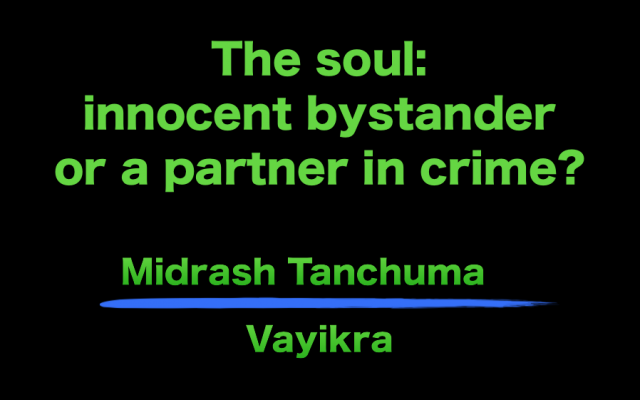 The Midrash focuses in on an easily overlooked word from the Parsha which radically changes assumptions we held about the relationship between body and soul:

“When a soul sins unwittingly” (Leviticus 4:2)

Many would simply assume that in this context, the word “soul” is a synonym for the word  “person.”  However,  Midrash Tanchuma takes it literally and asks a simple question:  “Does the soul sin?”

The soul is that intrinsic part of us that comes directly from G-d. Isn’t it trapped in the body and  has no choice but to go along for the ride?

The Midrash brings 2 parables which tell a very different story.

The first story is about two people who committed the very same crime in the royal palace. One was from the countryside and the other worked in the palace. The king released the one from the countryside because he couldn’t be expected to know the rules of the palace.  However the one who worked in the palace was punished because he should have known better. The country bumpkin represents the body. However the soul, which came from G-d, should have known better how to act in the presence of the king — G-d.

Partners in crime
The Midrash offers another parable which sees the body and soul as equally guilty parties. However, there’s a happy ending.

It seems that when the final judgement is rendered, the body and soul will each try the same lame argument to weasel their way out of responsibility for their actions. The soul will say that it was all the fault of the body. The proof being that soon as the soul departed the body, no more transgressions were committed. Big surprise, the body uses the very same argument.

The Midrash presents G-d’s response in the following parable:

“A king had an orchard with ripened grapes, figs and pomegranates.The king said (to himself), “If I post a guard who can see and walk, he will eat the ripening fruit for himself. He [therefore] posted two guards, one lame and one blind.”

Unfortunately, the guards were enticed by the smell of the ripening fruit. The lame guard suggests if he can ride on the  blind guard’s back they can steal the fruit and share the booty. When the king sees the fruit missing, the lame guard says he can’t be to blame because he can’t even walk. The blind guard claims he doesn’t even know where the trees are located. The king puts the lame guard on the back of the blind guard and judges them as one. Similarly G-d will make the soul enter the body again for judgement. Interestingly, the Midrash does not even bother to identify which guard represents the body and which the soul. As if it doesn’t really matter. They are both guilty.

The Midrash goes on to describe how King David asks for mercy from strict judgement. G-d replies that He takes into account the fact that people are victims of the evil inclination. However, the day will come that there will be no more evil inclination. The good news is that  G-d recognizes that there are extenuating circumstances for both body and soul.

By the way, in our daily prayer book we have a seemingly contradictory statement: “My God, the soul which you have placed within me is pure…” However there is a difference between a “Nefesh” (that the Midrash was discussing) and a “Neshama.” In Kabalistic writings these terms refer to different levels of the soul.  I refer you to this article on aish.com.

Charismatic, pathological, false prophets.
Just how far can this evil inclination take us. The Midrash gives an example of a pair of  false prophets who were also partners in crime. However their crime was so twisted, they managed to accomplish 3 of the 6 deeds which the Proverbs lists as abhorrent to G-d:

“There are six  character traits that G-d hates..(among them)  Haughty eyes… A heart plotting thoughts of deceit, feet quick to run to evil (Proverbs 6:16-19). This refers to Ahab ben Kolaiah and Zedekiah ben Maaseiah.”

Their evil plot consisted of approaching Babylonian noblemen and asking to speak to their wives about an urgent matter. Once one of them was granted an audience with a nobleman’s wife, he would tell the woman that she has a chance of a lifetime to be impregnated by a true prophet of Israel. He would then direct her to a meeting place with the other false prophet.

The plot went off without a hitch until they got so confident that they approached the king, Nebuchadnezzar. His wife said she could only go through with it if her husband agreed. Nebuchadnezzar challenged the false prophets based on his knowledge that the G-d of Israel hated sexual immorality. However, he proposed a simple test. He would throw them in a fiery furnace as he once did to Hannaniah, Mishael and Azaria. After they miraculously survived, the king knew they were indeed righteous.

Being pathological liars, they calmly informed Nebuchadnezzar that such a test only works with 3 people and they are just 2. Nebuchadnezzar didn’t fall for that line and agreed to find a third Jew to throw in the furnace with them. They suggested Joshua the High Priest, thinking that G-d would surely save them in the merit of the saintly High Priest. However they did not count on the fact that G-d could save the High Priest and not them. Which was their fatal mistake.

Perhaps, in these times,  there is a lesson for all of us to examine whether we too have gotten wrapped up in our own self-deceptions

About the Author
(Almost 100 Midrash Video summaries can be found on my youtube playlist: https://www.youtube.com/playlist?list=PLynSVeS5_iNhHleKroA6r3br-bmaHQigk) After college and Semicha at Yeshiva University my first pulpit was Ogilvy where I wrote TV commercials for brands like American Express, Huggies and Duracell. My passion is Midrash Tanchuma. I am an Architect of Elegant Marketing Solutions at www.mindprintmarketing.com. We are living in (where else) the Nachlaot neighborhood of Jerusalem.
Related Topics
Related Posts
Yoni Mozeson
Comments