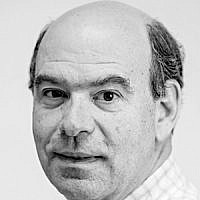 The Blogs
Jeff I. Greenwald
Apply for a Blog
Please note that the posts on The Blogs are contributed by third parties. The opinions, facts and any media content in them are presented solely by the authors, and neither The Times of Israel nor its partners assume any responsibility for them. Please contact us in case of abuse. In case of abuse,
Report this post.

When you hear any news about Mike Pence, it never reasonates to me, as something  “Jewish”.   And despite him being in public service, essentially since 2000, no one knows that much about him. He is a social conservative…That alone (those values)  aren’t very “Jewish” to me.  He signed a religious freedom bill into law in 2015 extending legal protections to Indiana business owners who didn’t want to support same-sex weddings. Not very Jewish, huh?  (Didn’t the Supreme Court rule on that? ) Also a Tea Party supporter? Yep, …..not Jewish. The Veep also authored a twitter, paraphrasing Ronald Reagan,” there’s nothing better for the inside of a man than the outside of a horse.” Not a really Jewish quote that grabs the American Jew in the kish-kehs, huh?!  (I wonder how many Jews own horses, anyway!!)Even in Mike Pence’s speech at an Israel Independence Day Commemoration this year, he reminded us that he isn’t Jewish. “For my part, my Christian faith compels me to cherish Israel……”. (As is we needed to be reminded that he is Christian!)

Now those fires in the Sonoma-Napa-Santa Rosa area….. do those grab the American Jew?   They somehow grab me.    Of the nearly 7000 houses and structures destroyed, more than 50 Jewish families lost their homes. But does that alone doesn’t make this a Jewish issue? Afterall, 50 out of 7000 isn’t very much.

This happened right after the hurricanes in Houston and Florida and in the Caribbean, and in Puerto Rico, and just after a deadly earthquake in Mexico.  While much of the emergency crews and our nation’s focus and leadership had pivoted American resources to those areas, California too had lost homes, jobs, agriculture, and infrastructure. What makes this inherently “Jewish”?

Didn’t Israel send Emergency Response Teams to the affected hurricane areas?  Yes, they did. So what makes the fires in Northern California so Jewish?

Was it the damage to the processing and field equipment at the Hagafen Cellars along the Silverado Trail?  Or the destruction of crops belonging to Covenant Winery?  What about the damage to URJ Camp Newman, a retreat for over 1400 Jewish youth each summer? What about how congregations like Ner Shalom in Cotati and Congregation Shomrei Torah have opened up their facilities and made their staff available to all local residents, Jewish or not,  impacted by the fires?  What about how the Jewish Federation has started a fund in response to the  Wildfire Emergency in the North Bay?  What about how the JFCS (Jewish Family and Children Services) has also started raising funds, as well as putting on Insurance Workshops to assist people to rebuild their lives? What about organizations like the JCC of Sonoma County who are providing  therapists and other professionals helping displaced residents deal with PTSD and other reactions to the fire?  And helping those dealing with the guilt associated with having some houses being spared…. right next to their neighbors’ homes who were consumed by fire?  Do those make this an inherently Jewish catastrophe?

“I don’t know”  is the answer to the questions posed above.  I know that thousands of Jews in Florida and Houston had their lives changed due to the hurricanes, and I know that Jews in Mexico were also impacted by the earthquake.  But somehow the geographic proximity and the collaborative  Jewish response to the Northern California fires makes this seem like a Jewish event. This week our 9th grade class at Congregation Beth Am in Los Altos Hills will study the story of Job.   This is the story of why bad things happen to  good and righteous people.

From Job 41:  “No one is fierce enough to rouse it.  Who then is able to stand against me?  Who has a claim against me that I must pay? Everything under heaven belongs to me.”

Written with no apologies to Mike Pence.

About the Author
Born in Burbank California, educated in the west with a BA from Stanford and an MBA from UCLA, and having taught religious school in 3 Reform Jewish Congregations. Chants from the head and the heart.
Related Topics
Related Posts
Comments
Advertisement