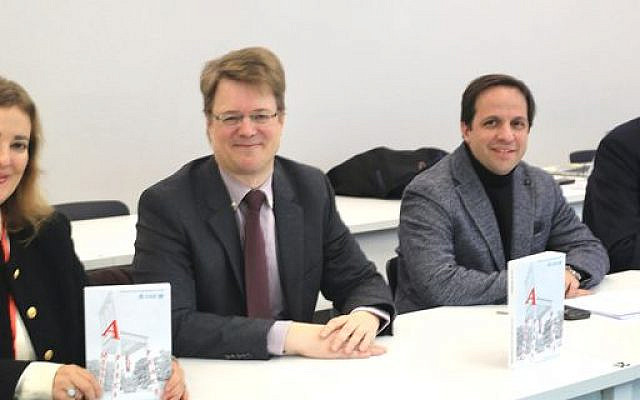 Co-edited by Dr. Michael Wiener (Senior Fellow in Residence at the Geneva Graduate Institute of International and Development Studies during his UN sabbatical leave in 2022) and Dr. David Fernández Puyana (Permanent Observer of UPEACE to the United Nations in Geneva), the book “Missing piece for peace” was presented at the University for Peace (UPEACE) in Costa Rica on 6 December 2023. Later, organized by the Geneva Peacebuilding Platform, the book was again launched at the Graduate Institute and Development Studies in Geneva on 19 December 2023.

In the cover of the book highlights the monumental sculpture Broken Chair, which stands twelve meters high in front of the United Nations Office at Geneva. It illustrates both the despair and dignity of victims of armed violence. In addition, the chair’s mutilated fourth leg could be regarded as a symbol for various lacunae in the eternal endeavor of attaining peace across the globe. One of these missing pieces is the unresolved relationship between the right to peace and freedom of conscientious objection to military service.

Following up on this suggestion, this book brings together chapters written by experts who have been involved in elaborating the 2016 Declaration on the Right to Peace or in shaping freedom of conscientious objection to military service since the 1980s. The contributors include the Ministers of Foreign Affairs of Costa Rica & Croatia, diplomats, civil society representatives, academics and United Nations independent experts from the Advisory Committee, Human Rights Committee, as well as former and current Special Rapporteurs. This book also contains short personal stories about positive experiences and practices by conscientious objectors and peace activists.

Its publication in open access through UPEACE Press is emblematic in view of the explicit reference, in article 4 of the Declaration on the Right to Peace, to UPEACE and its General Assembly-based mandate to contribute to the great universal task of educating for peace by engaging in teaching, research, post-graduate training and dissemination of knowledge.

About the Author
Dr. David Fernández Puyana was born in Spain and is a practitioner and international lawyer specialized in international human rights law, international relations, peace studies, United Nations and civil society movements. He earned a Phd with European Mention and he has also a Degree on Law & Philosophy, as well as, some Masters on Human Rights (Essex, Alcala de Henares and Barcelona Universities). He served as adviser at the UNESCO Liaison Office and the Permanent Mission of Costa Rica to the UN in Geneva. As a legal assistant of the Chairperson-Rapporteur of the UN Intergovernmental Working Group on the right to peace, he was one of the architects of the Declaration on the Right to Peace adopted by the UN General Assembly in 2016. He advises Paz sin Fronteras and is Professor of Public International Law at Abat Oliba University CEU. Since June 2018, he serves as Ambassador and Permanent Observer of the University for Peace established by the UN General Assembly to the UN and UNESCO. He is also nominated Gender Champion.
Related Topics
Related Posts
David Fernández Puyana