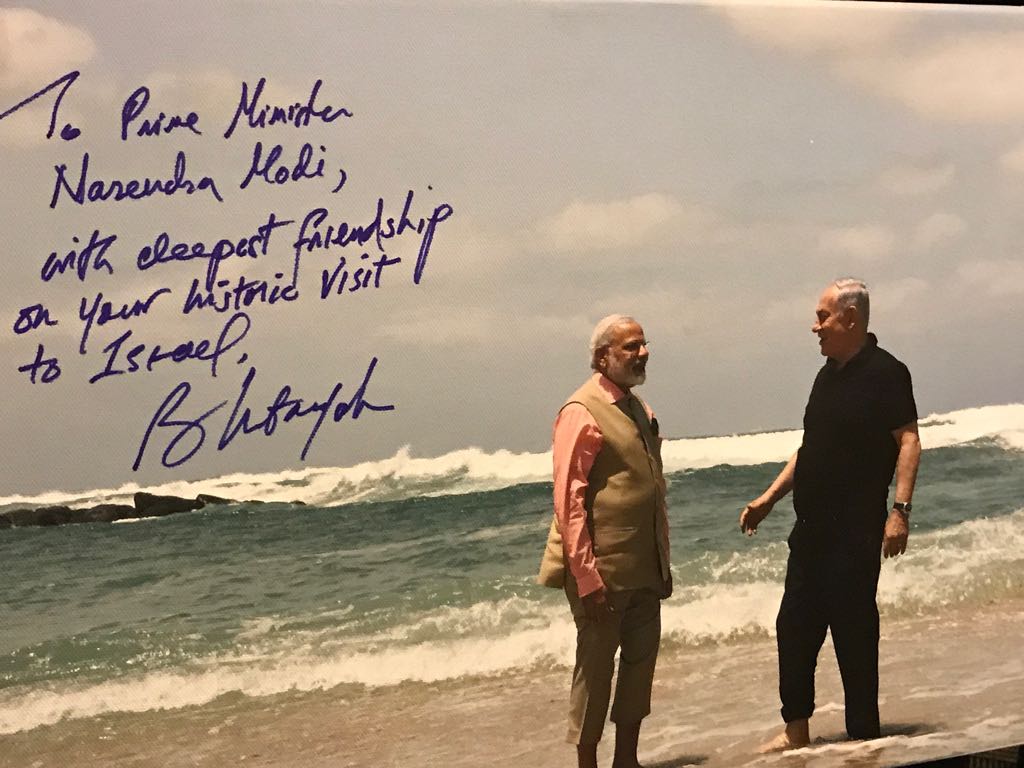 A week since Prime Minister Modi’s visit to Israel, strategic and political analysts are still gushing about the bonhomie and camaraderie between PM Modi and PM Netanyahu. Some of these experts have confirmed that the ambiguity over the bilateral relations is finally over. Officially, seven deals were signed which includes setting up of ‘India-Israel Industrial R&D Fund’, developing cooperation on agriculture and water conservation, and setting up of the Geosynchronous Earth Orbit (GEO) and Low Earth Orbit (LEO) optical link.

Coming out of the closet

Privately, Israeli diplomats used to complain that India treats Israel like a ‘mistress’. Apparently, this grievance seems to have been resolved after this historic visit of Prime Minister Modi. Despite India being hesitant in establishing formal diplomatic relations till 1992, Israel has been steadfast in its belief that the Indo-Israel relationship will be of vital importance to both the countries. It is virtuous to end the era of belief by the Indian leadership that the relationship with Israel should be kept under the radar. The narrative in West Asia has changed and the new dynamics do not keep India away from keeping this relationship in the shadows. It is a right step taken by Prime Minister Modi to come out in the open with our centuries-old relationship with Israel and its people.
The two leaders had developed a good rapport even before this visit as evident from their meetings at multilateral forums and their unique exchanges via Twitter Diplomacy or ‘twiplomacy’ to say in other words.

Trade and economic cooperation
Politics and diplomacy may be a part of a separate game that the sovereign nations play according to their own designs, but economics is a different ballgame and this coming out of the closet with Israel is a recognition of this reality of the 21st century. India is a major economic power and the realization and acceptance of this fact have opened new vistas in India’s engagement with the world. We have seen that terror and trade were two of the main planks that came out of the Joint Statement. It is somewhat embarrassing that India-Israel trade stands merely at $4 billion. This figure is nothing as compared to the kind of technologies that the Israelis have, the kind of business connections that they have and the large companies that they deal with in the modern world. Recognition of these essential facts was reflected in the decision to establish for the first time ever, an India-Israeli CEO’s forum which comprised of 17 CEOs each from both sides. Federation of Indian Chambers of Commerce and Industry (FICCI) represented from the Indian side and The Manufacturers Association of Israel represented the Israeli side. The establishment of the CEO’s forum is itself a recognition of the need to move beyond the current pace of trade to an optimum level (targeting $20 billion in the next five years). The target may seem ambitious but it is possible, given the fact that the MoU’s worth $4.3 billion (non-defence component) were signed during this visit itself. These MoU’s are not just flutes in the air to celebrate the first visit of an Indian Prime Minister to Israel, but they are real agreements that were in the box from the past few years. The signing of these MoU’s is fructification of these long negotiated agreements.

Start-ups surprise
As the Start-ups are the larger canvass of innovation, special focus was laid on establishing globally competitive ‘Start-ups’ with the establishment of India-Industrial Research and Development Project with a corpus of $40 million which is a G-to-G (Government to Government) fund. To highlight the importance of this component, we should remember that the FICCI received more than 140 confirmations within one week from Indian Start-ups to become a part of the FICCI-led delegation to Israel during the visit of the Prime Minister. The applications have been deferred to the end of the month due to logistics and other issues. This shows the fact that the enthusiasm of collaboration in the Start-ups and innovation sector is very high among the Indian entrepreneurs with respect to Israel, both for technology and finance. A tripartite collaboration between India, Israel and the United States is also being proposed to explore the aspects of finance, technology and entrepreneurship for the start-up’s sector.

Agricultural cooperation
Agricultural partnership with regards to water conservation techniques (especially drip irrigation) is one of the most important components of our cooperation which directly impacts India’s food security. This cooperation is in sync with the objective of launching a Second Green Revolution by the Government of India. Three work plans between India and Israel are being implemented already for the agricultural development in India. Both leaders have agreed to a fourth work plan which is poised to be launched in 2018. Israeli water companies like NaanDan Jain Irrigation Ltd. are very active in India (mostly near Chennai, Hyderabad and Agra) and Israel will be partnering India for the nationwide water conservation campaign. Israel is a world leader in water conservation technology with more than 90% of water being processed through recycling technologies for both irrigation and drinking purposes. As Israeli technology complements India’s developmental needs, it is imperative for India to take advantage of the same.

Defence cooperation
The most concrete arena of cooperation that is flourishing since the last many years is the ‘defence’ cooperation between the two countries. India is the largest importer of Israeli defence technology in the world and Israel is the second-largest exporter of defence equipment to India, second only to Russia. In February itself, an agreement worth $2.5 billion was approved by the Government of India to buy Barak 8 system to be deployed by 2023. About three Phalcon AWACS, Spike (anti-tank missiles) and co-development of significant defence equipment are being pursued between India and Israel. The co-development process of missile systems for the Navy, Air Force and the Army started about eight years ago and it is at the stage of fruition. India and Israel jointly plan to potentially export these defence missile systems to third countries. Israel Weapon Industries (IWI) and India’s Punj Lloyd have set up first private sector small arms manufacturing plant at Malanpur in Madhya Pradesh in March 2017. Therefore, the defence cooperation is an ongoing process between India and Israel that precedes this visit of the Indian Prime Minister to Israel, which is set to continue and perhaps get bigger in the years to come.

Combatting terrorism
While speaking on the menace of terrorism, both leaders acknowledged the resolve to bilaterally fight against terrorism in a combined effort to secure better lives for our citizens. Although the outlook against terrorism is quite different between India and Israel, there are also shared ideologies which are manifested in the belief that the threat of terrorism is omnipresent. While fighting against terrorism, Israel has managed to develop successful strategies and technologies that are very useful for India. This is the key thrust of our cooperation in counter-terrorism and anti-terrorism. In counter-insurgency and cyber security, India and Israel have been cooperating for a long time. The strategies for border management and counter-terrorism operations by Israel can be adopted in by India to deter the threats emanating from our neighbourhood.

A new beginning
Israel has the potential to become a co-partner in India’s economic modernization. Both countries can jointly explore the global market in the field of cyber technology, space technology and the defence sector to pursue their economic modernization objectives. To subtly add few other areas of cooperation, it is advisable for India and Israel to explore collaborations on civil aviation to increase people-to-people contacts; and media and entertainment industry sectors to challenge the global narrative plaguing the perception of the world with respect to our beloved nations. To casually phrase this ‘live-in-relationship’ being recently legitimized into an eternal marriage, the momentum built through this visit should be sustained by exploring more areas of cooperation and implementation of joint projects in an efficient manner because even the sky is not the limit to Indo-Israel ties.