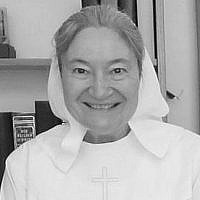 The Blogs
Anastasia Kennedy
Apply for a Blog
Advertisement
Please note that the posts on The Blogs are contributed by third parties. The opinions, facts and any media content in them are presented solely by the authors, and neither The Times of Israel nor its partners assume any responsibility for them. Please contact us in case of abuse. In case of abuse,
Report this post.

In 1947 in an attic flat in Germany the Sisterhood of Mary was born. Seven girls with their two leaders: Mother Basilea and Mother Martyria. Building a motherhouse and chapel with bricks scavenged from the ruins of Darmstadt, they eventually had a home of their own in the suburbs. For the first 10 years after World War II, Germany was struggling to survive before recovery began with the Marshall Plan. Not until summer 1954 was Mother Basilea challenged during a time of prayer by the question: What about Israel? “Beside every German stands, invisibly, a Jewish brother, one who has already passed into the realm of the dead, or one of the survivors, but each marked with terror and death – and each of them accuses us… ‘Where is your brother Abel? – Where is your brother Israel? – Where is he?’ Then God would point to Auschwitz, Treblinka, Maidanek, Belzec, Gross-Rosen, Sobibor, where the smoking chimneys stood” (Israel, My Chosen People: A German Confession Before God and the Jews: M. Basiliea Schlink)

So wrote Mother Basilea when the enormity of Germany’s national guilt broke upon her some 10 years after World War II. Elie Wiesel writes of a 10-year self-imposed silence following the Shoah, a crime for which there were no words. Battle-hardened troops liberating the concentration camps wept at the sight of walking skeletons and corpses stacked like cord-wood. For Germany, the revelations left a bitter legacy of shame. Yet amid the ravages of war a spiritual awakening was happening here in some Christian circles, including a semi-illegal Bible study group led by our future founding mothers, who in complete defiance of Nazi ideology taught some 150 girls from the Hebrew Scriptures. From this group the Sisterhood of Mary emerged.

Before Holocaust literature had properly developed, Mother Basilea sent a sister to the Institute of Contemporary History in Munich for transcripts of the Nuremberg Trials and would read the harrowing reports to her community, interspersed with passages from the Book of Isaiah. “This is what our people did to the Jews. And this is what God says about His beloved, chosen people.” Repentance broke out among these young women, who were mere girls during the war. Following the example of Daniel, Ezra and Nehemiah, she prayed for forgiveness for “my and my people’s sins” in daring to touch the apple of His eye. Yet even before the war, love for Israel, flowing from a deep love for God and His Word, lived in Mother Basilea’s heart. As national president of the women’s wing of the Christian student movement in Germany from 1933 to 1935, she persuaded the group to reject the racist ‘Aryan Paragraph’, a Nazi regulation excluding Jews (and by extension other “non-Aryans”) from organizations, professions and public office. During the war, while travelling for a missionary society, she risked her life and career by speaking publicly on the “unique destiny” of the Jews, whom she continued to describe as “the people of God”. Twice she was summoned before the Gestapo, albeit not for her talks about God’s destiny for the Jews but for proclaiming Jesus – and not Hitler – as the true leader.

It was this love for Israel that seared her conscience as she considered the crimes of her people. Writing extensively on the need for national repentance, she wrote the play Israel. Performed at the Kirchentag (bi-annual Protestant church rally), it helped change the climate towards Israel in Germany. She also initiated many practical acts of repentance. Caring for a paralyzed Jewish victim of Nazi medical experimentation. For 15 years, while the sisterhood comprised only Germans, eating breakfast standing up, in memory of the gruelling roll calls in concentration camps. Welcoming the Sabbath with a service of blessing for Israel. Commemorating then and in our Good Friday service the six million who perished in the Holocaust. Serving as volunteers in Israeli hospitals. Providing respite for Holocaust survivors over a 50-year period at the sisters’ “Beth Abraham” guest house in Talpiot, Jerusalem. Offering hospitality and moral support to Jewish witnesses at the 1960s Holocaust trials in Darmstadt and Frankfurt, even accompanying them into the courtroom. Placing memorial plaques of atonement confessing blood-guilt at the sites of massacres and former concentration camps.

During a 40-day time of prayer at Sinai in 1963, Mother Basilea became more deeply aware of the holiness of Israel’s calling and the covenant God made with His chosen people. It was there that she also received the Rule for our sisterhood, based on the Ten Commandments and the Sermon on the Mount.

At the same time a love for the nations of the world was born. As the moral revolution of the sixties gathered momentum she saw Sinai, the symbol of the Ten Commandments, come crashing down on the nations of the world, particularly our Judeo-Christian society, as God’s rules for living are flouted. She saw the nations of the world losing their bearings and heading for destruction. Upon her return she had a map of the world cut up into different nations and instructed the sisters, “Ask God which country He is placing on your heart to bless and bring before His throne in prayer.”

During a visit to America in 1964 she was invited to speak in synagogues and to a group of Jewish laymen and rabbis at the Headquarters of the Union of American Hebrew Congregations. Her theme was the joint responsibility of Christians and Jews to uphold the Ten Commandments.

Who was she as a person? Born Klara Schlink in 1904, she grew up in an academic family that was idealistic but not especially religious, merely attending church at Christmas and Easter. She did Froebel teacher training in her desire to work among youth, attended Bible college, qualified as a social worker, eventually obtaining a doctorate in psychology from the University of Hamburg, where she studied under the Jewish professors William Stern (psychology), Ernst Cassirer (philosophy) and Erwin Panofsky (history of art) until they were forced to leave.

As a child and teenager, she was lively, bubbly, anything but a model pupil, disrupting classes with funny comebacks, teaching the other girls the latest dances in gym classes, and graduating with a low mark in conduct. Theologically she crossed swords with her confirmation instructor, who said he could pack his bags if he had any more difficult ones like her. Outwardly confident, but inwardly seeking, she once confessed in her journal: “I simply can’t understand how great men of God can feel His presence and hear His voice… I search all the books I can lay my hands on, looking for something I can identify with – though what it is I can’t say… What is the good of all the beautiful sermons in the world when I doubt the basic principles?… Why can’t I enjoy life like others in dancing and superficiality and in having fun?” As a teenager she questioned the Bible’s account of creation, affirming her belief in the intrinsic nobility of humanity. “I can’t believe the words of Christ: ‘No one comes to the Father except through me.

A series of disappointments in others and herself led her to receiving an epiphany. At 17, she became a devout Christian and could say like Job, “I know that my Redeemer lives.” She experienced the truth of God’s Word: “You will seek Me and find Me, when you search for Me with all your heart” (Jeremiah 29:13 NKJV). Her deeply ingrained ethical strivings would later receive even more serious blows because of the moral failure of Germany, a nation of culture.

In her obituary in 2001 the Independent (UK) wrote, “Perhaps Mother Basilea’s most noted contribution to religious life was her work for reconciliation between Germans and Jews.” In acknowledgement of her service to her country, she was to be awarded with the Order of Merit of the Federal Republic of Germany, which she declined, not setting store by human honours. Had it not been for Mother Martyria, though, we would never have known.

Award or no award, Mother Basilea impacted many lives, Jewish and otherwise. As a community we remember her with deep affection for conveying to us the heart of God for Israel. With sisters from Japan to Chile, from Canada to New Zealand, and branches around the world, we all have this in common: a great love and sense of debt to our elder brother Israel. Those of us who were there will never forget Mother Basilea’s talks on biblical characters like Abraham, Moses, Jacob, David, and others. She was fascinated at how God would speak to them, reveal His heart to them, and use them as an instrument of blessing for future generations. In her love for God and His Word she had deep respect for His chosen people Israel. And this she expressed in the written and spoken word as a lasting legacy. She firmly believed that “at the close of the age… there will be a bringing together of those who belong together because they fear the living God and give Him glory – Jews and Christians”. Foreseeing a future time of persecution for the Jews, she appealed to us towards the end of her life always to be there for the Jewish people.

Israel, My Chosen People: A German Confession Before God and the Jews (M. Basilea Schlink)

Further titles by M. Basilea Schlink for more on the Evangelical Sisterhood of Mary, available from the sisterhood publishing house verlag@kanaan.org:

I Found the Key to the Heart of God (autobiography)

Realities of Faith: The Miracles of God Experienced Today (the story of “Little Canaan”)