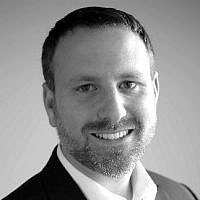 The Blogs
Yonatan Cohen
Apply for a Blog
Advertisement
Please note that the posts on The Blogs are contributed by third parties. The opinions, facts and any media content in them are presented solely by the authors, and neither The Times of Israel nor its partners assume any responsibility for them. Please contact us in case of abuse. In case of abuse,
Report this post.

At some point during this war, and especially as the extent to which Hamas is wont of Israel’s destruction became clearer than ever, I lost faith in the possibility of peace. Simultaneously however, I seem to have also lost faith in the ways of war. Not this war, which I deem as just and necessary, but in the next war, and the one after that. Indeed, as the war raged on, I wished to recite a Kaddish for all solutions, be it political or military, a Kaddish for peace and a Kaddish for war.

On a very personal level, in moments of prayer and introspection, I could not help but wonder: How long can Israel keep up this fight for its survival? Can war ever help diminish the flames of hatred and or the choice for more violence on the other side? At the same time, with no prospect for peace or a sign of a willing partner, and plenty of prospects for more war, what might we pray for now?

Let me be clear. The recent war has not rendered me passive – spiritually or politically. As long as this war goes on I will continue to pray fervently for the welfare of Israel, all of its citizens, and members of the IDF. I will also continue to pray that the Holy One show compassion and provide protection for innocent Palestinians, even as their own tyrannical leadership does not. In addition, like many leaders in our North American Jewish community, I have, and will continue to, lead prayer vigils in my community, preach in support of Israel at shul and Federation gatherings, help collect funds to support children in Israel’s south and IDF units serving in Gaza, rally (as I did a few weeks ago) in front of Israel’s consulate in NYC, and protest in front of the UN or other such international organizations. The urgency of the hour certainly calls for such action and prayer.

And yet, simultaneously, the urgency of the hour must also call our long-term prayers, as opposed to our immediate prayers, into question. After all, what does prayer look like in light of the possible paradigm shift brought about by this war?

In explaining the nature of the day of Tisha B’Av, Rav Soloveitchik zt”l offers a powerful model. The Rav, as he is lovingly called by his students, maintained that “Tisha B’Av is a day of mourning; it is not a day of prayer” (Kinnot Mesoret HaRav, p. 780). The Rav offers a number of important examples in support of this insight. In the Book of Lamentations, the prophet Jeremiah declares that “[God] shut out my prayer” (Lamentations 3:8). In addition, on Tisha B’Av, the words “Let our prayers be accepted” are omitted from Kaddish. Similarly, argues Rav Soloveitchik, we abstain from performing Tachnun, a ritual act that is deemed essential for the completion of prayer according to Maimonides. Finally, unlike Yom Kippur or other public fasts, Tisha B’Av does not conclude with a Ne’ila service, in which we request that all our prayers be accepted (see Tosfot Yom Tov, Taanit 4:1, for a similar explanation of this practice).

Though we ultimately shift our state of mourning after the middle of the day, and certainly during the Mincha service with Nahem (a prayer for God’s consolation), the essential spirit of Tisha B’Av is still one of absolute mourning, defined by the evening and morning services. In my view, absolute mourning “shuts out” the possibility of prayer. The trauma and shock of the experience humble the praying individual. Faced with the ultimate uncertainty of a world, or a worldview, that was and no longer is, the humble servant no longer knows what to ask of his or her Maker. The mourning called for by Tisha B’Av silences our lips, despite what we may publish, post, or preach. In absolute mourning, we are absolutely uncertain of where we wish to head, what we wish to request, what it is we desire through prayer.

The war in Gaza, I believe, will eventually call our people to make time and space for such absolute mourning.

In that singular moment of humble mourning, let peace rest in peace…and let war rest in peace. For that moment, let us mourn without a prayer, mourn without the certainty of knowing what it is we desire of God for Israel or for the world. For that brief moment, let us rest in a mournful state. And then, and only then, let us again, find a new hope and a new vision for Zion through prayer. And then, let us pray again.

About the Author
Rabbi Yonatan Cohen is the spiritual leader of Congregation Beth Israel, a thriving modern Orthodox shul in Berkeley, CA. R. Cohen is a respected speaker and teacher who has worked with organizations such as the Hartman Institute of North America, Kevah and the Wexner Foundation. A native of Israel, he has a B.A. from McGill University and received rabbinic ordination from Yeshivat Chovevei Torah.
Related Topics
Related Posts
Yonatan Cohen
Comments