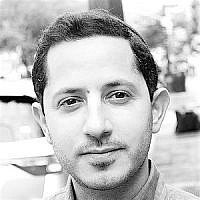 The Blogs
Israel Bitton
Apply for a Blog
Please note that the posts on The Blogs are contributed by third parties. The opinions, facts and any media content in them are presented solely by the authors, and neither The Times of Israel nor its partners assume any responsibility for them. Please contact us in case of abuse. In case of abuse,
Report this post. 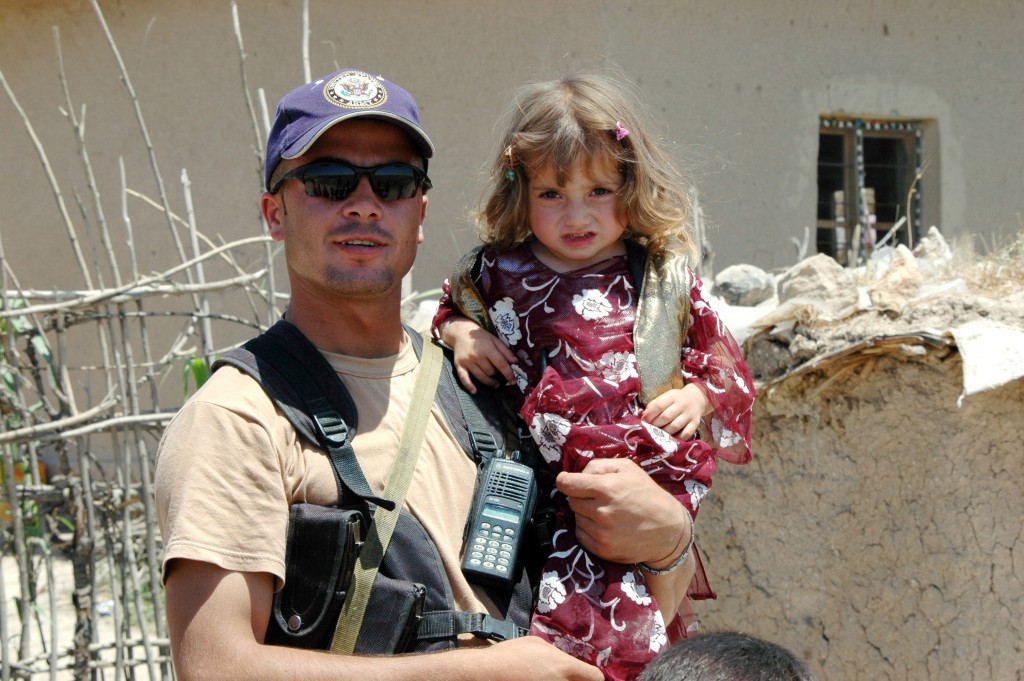 Portrait of a Kurdish Peshmerga fighter holding his daughter in their village outside of Dohuk, Iraq. (Public Domain)

As you embark on making “the toughest deal ever” between Israelis and Palestinians with the notion that it’s the most important unresolved conflict in need of a solution, I ask you to not overlook the plight of the Kurdish multitude that are spread across a geographical swath from southeast Turkey all the way to northwest Iran (with northern Syria and Iraq in between) numbering some 30-35 million people, who have long served as the punching bag for local despots and tyrants, and have ultimately been relegated to the untenable position of bastardized castaway nation among a league of disunited (and disreputably dastard) nations.

If you’re aim is to fundamentally shift the socio-political landscape in the Middle East to one that is less authoritarian and anti-American, less extreme in its interpretations of Islam, and more willing to come to terms with the new world order, the establishment of a fully independent and internationally-recognized Kurdish state is your best bet at shifting the quicksands of Arabia towards a more stable future that can extend prosperity and peaceful living to the masses.

Despite the historic wrong that needs to be corrected (namely, the deliberate betrayal following the promise of a Kurdish state during the gathering of nations at Versailles in 1918 that left the Kurdish people as the single largest stateless nation in the world), there are more pressing strategic reasons to support full Kurdish independence: the Kurds have proven to be the only force in the region willing to directly take on ISIS and succeed in doing so; A strong Kurdistan is the best antidote to the Sunni-Shia schism that underlies every major conflict throughout the Middle East; A Western-backed Kurdish state could be a safe-haven for a region in dire need of one (particularly for persecuted minorities like the Yazidis); and with a semiautonomous region in northern Iraq already serving as a de facto Kurdish state, the Kurds come well equipped for the trials of statehood and the growing pains that accompany it.

Instability in the Middle East, as any political scientist knows, is primarily a threat to the globalist-capitalist order, and only secondarily to the region’s powers. Thus, the battle against ISIS and other monstrosities that can emerge from the dark Middle Eastern power vacuum has to be a top priority for all Western nations. With the rising tide of anti-interventionism sweeping across the U.S. and Europe, more than ever, we need to be supporting effective fighting forces on the ground and to date it’s not the American-armed (but overly reluctant) Saudis, Gulf States, or unstable autocratic regimes across the region that have been our best allies, but rather the ramshackle, under-armed, underfunded Kurds that have proven to be the most effective at fighting the spread of Islamic radicalism. All major military successes that have curbed the territorial expansion of ISIS, particularly in Syria and northern Iraq, have come with a high cost of Kurdish blood, sweat, and tears, but they got the job done. They, and not us.

As the desert dust settles around Iraq, Syria, the Levant, and Maghreb, and ISIS finds its territories shrinking, it’s time to think of the New Middle Eastern Order. In a region caught on the ethno-religious fault line of the Sunni-Shiite divide, an independent Kurdistan would stand as a beacon of light in a region long darkened by death and destruction.

We all know that Syria today will never be the Syria of years prior to the outbreak of government-backed violence against its innocent civilians. We know that Iraq is struggling to preserve the delicate balance between tribalism and collectivism. More importantly, we know that with sectarian battles still raging in Yemen, parts of Libya, and chunks of Syria, the major undercurrent of those conflicts are not to be found on the battlefield itself, but rather in Riyadh and Teheran. A strong Kurdish state that shows no fealty to either pole of Islamic influence is one that can depressurize (and deescalate tensions in) a region set for a major showdown as Iran continues to push its strategy of territorial hegemony in the Saudis’ backyard. America cannot get caught up in the schism, but will be a victim of its repercussions should we fail to act and support the regional players that can fundamentally change the Middle East power balance from bi- to multi-polarity.

Refugees of war-torn areas present not only a regional humanitarian crisis, but a global one, as Europe has become inundated with waves of illegal migration. Instead of deflecting responsibility, or swatting away loads of hapless refugees as they’re left to drown, a united Kurdistan would serve as a bastion of hope and peace for those displaced by the loss of their homes and general safety. The Kurds should not be synthesized into some monolithic creature by any means, as their cultural complexity is the very reason why the Kurds have proven to be among the most tolerant and amiable neighbors one could have in the Middle East. The Kurds have already shown their willingness to defend those who couldn’t defend themselves, and with the absence of American interventionism, we have no better partner for the betterment of millions of lives left hanging in the balance after the destruction wrought upon them by Assad and his Russo-Iranian backed cronies. With Saudi Arabia (and other states) refusing to use even tiny parts of their vast territory as temporary refugee relief, a free Kurdistan would be relied on to step up to the plate where no other decent country has emerged for the task. And despite the lack of full autonomy, the Kurds have already risen to the task and should be rewarded for doing so.

History in the Making

Finally, history is on your side, Mr. President. After a long-traveled arduous road, broken promises, and forgotten martyrs, Kurdistan is ready for its moment on the global stage. Sure, Turkey will object because of sectarian fears, Iran will oppose such a plan because it knows it’ll directly cut into its regional influence, Iraq will not willingly cede the lucrative northern oil-rich territories, and Syria would be livid to wake up to a new order that created stronger neighbors to keep its deadly ambitions in check. But the world has shown to never be “ready” for the right moves, requiring the boldness and guile of a few good actors to push the “change” too many are only willing to pay lip service to.

Mr. President, if you’re the dealmaker you claim to be, the Kurdish project can serve as a great legacy in strategic leadership, while practically bettering the lives of millions of people. I cannot ask that you simply implement and recognize a Kurdish state; but only that you please DO NOT, like all your predecessors have, forget the Kurds!

About the Author
Israel Bitton is a Brooklyn-bred award-winning branding and marketing professional by day and a budding philosopher by night who lives and breathes current events from around the globe in hopes of creating a better world.
Related Topics
Related Posts
Comments