The Blogs
Steven Moskowitz
Apply for a Blog
Advertisement
Please note that the posts on The Blogs are contributed by third parties. The opinions, facts and any media content in them are presented solely by the authors, and neither The Times of Israel nor its partners assume any responsibility for them. Please contact us in case of abuse. In case of abuse,
Report this post. 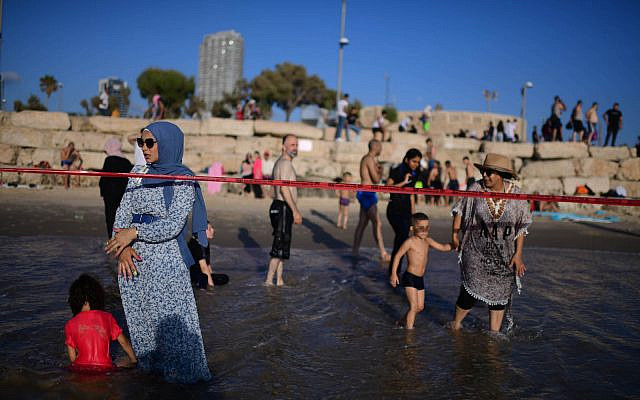 Israelis enjoy the sea by Tel Aviv during the third day of Eid al-Adha, on July 11, 2022. Muslims around the world are celebrating Eid al-Adha, the Festival of Sacrifice. (Tomer Neuberg/Flash90)

President Biden arrived in Jerusalem yesterday. He is staying a short walk from the institute where my wife Susie and I are studying.

The other evening, we walked home past the King David Hotel where the president is staying and made our way through Liberty Bell Park. It was filled with Muslims celebrating Eid al-Adha, the holiday commemorating Abraham’s willingness to sacrifice his son, Ishmael. (Islam’s version of this story is different than Judaism’s.) There was enthusiasm and ease in the air as families shared picnic dinners and children played on the basketball courts.

We then made our way to the First Station, the renovated space of what was once the train station where people arrived in Jerusalem when they traveled from Tel Aviv. There, among the restaurants, bars and shops, we discovered secular, ultra-Orthodox and Arab Israelis, as well as a fair number of rabbis from our program. In one area, Israelis were taking a dance class and in another they were enjoying a late dinner and in yet another, an evening cocktail.

There was no sense of the tension, and challenges, one reads about in the news. And while, they might be found a short distance away in the Palestinian territories, or on the borders of Gaza and Lebanon, or on other days in East Jerusalem’s neighborhoods (read about the racist chants shouted at May’s Flag March and the violence that followed), or even more recently at the Western Wall (read David Horovitz’s “Desecration at the Western Wall” to learn more), here it is as if I arrived at the beautiful and peaceful place no one hears about or truly understands, except perhaps those who call Jerusalem home.

I wish President Biden could take these sites in. I wish upon landing he went straight to Liberty Bell Park or the First Station rather than a missile battery or Yad Vashem. I understand why those were the first stops on his itinerary. I recognize the importance of demonstrating that antisemitism and Iran’s ambitions remain threats. I welcome his affirmation that “the connection between the Israeli people and the American people is bone deep.”

Still, I wish the president could take in this city’s vibrancy, even though it is now noticeably curtailed because of the security surrounding his visit. The dream of this place is that Jews, and Arabs for that matter (read Israel’s Declaration of Independence!), could lead ordinary lives in which they enjoy gathering with friends, good dinners (and sometimes bad), and cool summer evenings walking the streets of our reclaimed, and rejuvenated capital.

Too often people shout curses about this place rather than count its blessings.

Likewise, the Moabite king, Balak, sent Balaam to curse Israel. Instead, he ended up blessing them. “As Balaam looked up and saw Israel encamped tribe by tribe, the spirit of God came upon him. He said, ‘Mah tovu ohalecha Yaakov, mishk’notecha, Yisrael! How fair are your tents, O Jacob, Your dwellings, O Israel!’” (Numbers 24)

The parks, restaurants, streets, and coffee shops exhibit truths that are important for Biden to see and experience. It saddens and distresses, me that he cannot take in these as well. Instead, he speaks about the US-Israel partnership and how our alliance, and connections, are unshakeable. He gives voice to the challenges and struggles facing the modern State of Israel.

I am not blind to these. I have come to understand this. When I am here, these difficulties appear as light as the cool, desert breeze that welcomes Jerusalem’s summer evenings. I do not know how to explain the fact that Israel’s struggles seem weightier when I stand at a distance looking from afar rather than when they are a matter of a few miles from where I now sit.

It is not that the air is only filled with harmony. I wonder. Is it because here the disagreements are more nuanced, and the conversations deeper? Here, one feels like a participant rather than an observer.

Here, it is easier to breathe and my soul fills with peace.

Once Balaam sees Israel up close, he offers blessings. Indeed, how fair are your tents, O Israel!

About the Author
Rabbi Steven Moskowitz is the rabbi of Congregation L'Dor V'Dor, a community serving Long Island's North Shore. He began his rabbinical career in 1991 at the 92nd Street Y in New York. He travels every summer to Jerusalem to learn at the Shalom Hartman Institute where he is a Senior Rabbinic Fellow. Rabbi Moskowitz is married to Rabbi Susie Moskowitz and is the father of Shira and Ari.
Related Topics
Related Posts