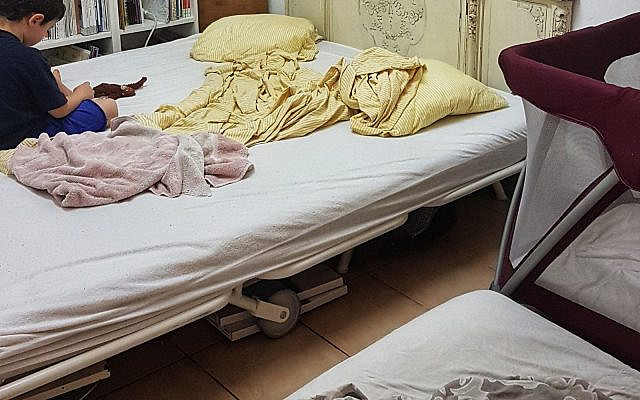 The security I felt as a single woman when I moved to pre-Bibi Israel in 1978 was an absolute sea-change in my life. “Aren’t you afraid?” asked my friends and family in the US, openly astounded that I would return to a war-torn land in the world’s most dangerous neighborhood. “No,” I replied. “I can walk down the street alone at night without gripping my keys between my knuckles and looking over my shoulder. Many people would come to my aid if something did happen. Everyone here has my back.”

No, I didn’t mean only the Jews. I went to work in Israel’s renowned Bedouin Mobile Unit soon after I arrived in Israel. When my husband was in Lebanon and the pained screams from my feverish two-year old’s car seat turned into eerie silence, I pulled over near the first Bedouin tent, absolutely confident that the family inside would help us make it to the ER.

Now, that two-year old and our non-Jewish grocer’s non-Jewish wife are afraid to take their children to the playground in my Yafo neighborhood in broad daylight. Forget missiles. Neither cover their heads. They fear thugs of all faiths who arrive from all parts of Israel to impose fundamentalist religion on my daughter and our neighbor by means of fists and rocks and Molotov cocktails. Needless to say, neither my daughter nor my neighbor would venture out at night alone. We could shelter from incoming missiles within the 90 seconds we have to get there. Keys between our knuckles, or a wig or hijab on our heads, are piss-poor protection from a mob of angry, young men.

Mr. Security, aka Benjamin Netanyahu, has robbed Israeli women of all faiths of our security.

When my husband was in Lebanon, the IDF’s promise to leave no soldier behind was vital to his sense of security and mine. IDF soldiers, their mothers, their fathers, their partners and their children relied on the knowledge that if they were wounded or worse the IDF would make every effort to bring them home. Now – in the midst of Operation Guardian of the Walls and following Operations Protective Edge and Cast Lead – we can no longer rely on Mr. Security’s promise to the mothers of Hadar Golding and Oron Shaul to bring them home for burial.

Mr. Security refuses to talk to Leah Goldin and Zehava Shaul. Mr. Security has robbed soldiers and their families of their security.

Last Tuesday, my daughter and son-in-law had to carry their five and one-year olds down four flights of stairs at 3 am to a neighborhood shelter full of what the five-year old called ‘mitz harakim’ – cockroach juice. A 40+ neighbor broke her ankle on the way. A young anxiety-stricken driver banged on the door sobbing and shaking to join the 30 people inside. The ambulance came to take both women away. My five-year old grandson was visibly scared, and my kids moved here the next morning to share our safe room. They were among the lucky 75% who have an official shelter in which to take cover. They were not among the unfortunate 25% for whom the longest-serving PM in Israel’s history has failed to provide adequate shelter – even in the hard-hit city of Ashkelon.

Former Gaza Envelope regional council leader Haim Yellin told Channel 12 on Thursday, “During the last 11 days, they (Hamas) have succeeded in firing as many (missiles) as they did during all 51 days of Operation Protective Edge…How could the government turn Ashkelon into Sderot 2? I’m just thinking of the children of Ashkelon who lack shelters. Like the shelters we fought for here in Sderot and the Gaza Envelope…If the State of Israel cannot provide its citizens with security, it must provide them with protection.”

Mr. Security has robbed us of whatever security we had before the latest round began 11 days ago. He has not made us more secure. He has systematically and continuously made us less secure, lulling us with his mantra – Iran, Iran, Iran – as our own streets and cities explode.

Of course, the situation in Gaza is far worse. Mr. Security and his corrupt colleagues in Hamas have seen to that. They have ruined and taken the lives of innocent Palestinian adults in Gaza, maiming and killing their children in their wake. They have ruined the economy on both sides of the border, leaving hunger and homelessness in neighborhoods where that did not exist. They have promised their bases that they can provide security to their own side by robbing that of the other side. Mr. Security and Hamas have robbed all of us and all of our children of our security and perhaps of our future in the Land that we love.

My five-year old grandson asked me after a siren how long “this” was going to last and whether we were going to put Hamas in jail after “this” ends. I told him that he was right that Hamas belongs in jail, but no, we can’t reach them to put them there. I understood that my grandson’s sense of security relies on the notion that Hamas are behind bars and unable to do further damage. I told him that we could not put Hamas in jail, but we could destroy their rockets and launchers and prevent them from robbing us of our security again. And that this would sadly take a few more days. I don’t believe that is entirely true.

I hope you understand that my sense of security relies on Mr. Security being behind bars where he belongs. I do believe we can do that, or at least deprive him of his power to rob us of our security again. I hope and pray that we do that in time.

About the Author
Varda Spiegel was Nurse-Director of the Bedouin Mobile Unit of the Negev, later serving as Maternal-Child Health Director for the Ministry of Health Jerusalem District. I was the English Web Content Manager for the Israel Museum and have translated from Hebrew to English for Haaretz and the ANU Museum of the Jewish People. I'm a grandmother, mother, and beachbum.
Related Topics
Related Posts
Comments