Sometimes it is smarter to keep silent than to make a fuss. It is not necessarily weakness. The demonstration at York University yesterday (Feb 4, 2016) was a prime example of silence being golden. Not because one should always be silent — because one should not always be anything — but because sometimes overall strategy demands wisdom and a look-and-listen approach before deciding on the best response to any particular situation.

The Toronto Jewish Defense League (JDL) had originally planned a demonstration at York University Student Center to demand removal of the antisemitic painting that has recently gained fame far beyond its merits as a work of art (see, for example: Antisemitic Mural at York: Protest or Acquiesce and The Mural and the Damage Done). Then, when a coalition of York student groups (#yudivest) decided to hold a divestment protest on the same date (coincidence or cynically planned that way?), the JDL changed its event to a counter-demonstration.

They decided that the divestment protest was an anti-Israel demonstration: 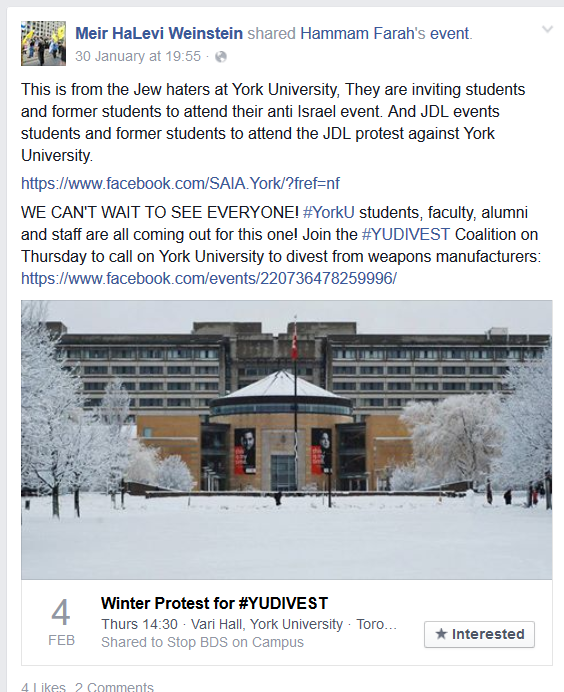 Here is the #yudivest invitation and I challenge anyone to show me how this is an invitation to an anti-Israel demonstration (other than by association with the Students Against Israeli Apartheid (SAIA) – now, association is important for underlying motivations, but will this play out in fact?): 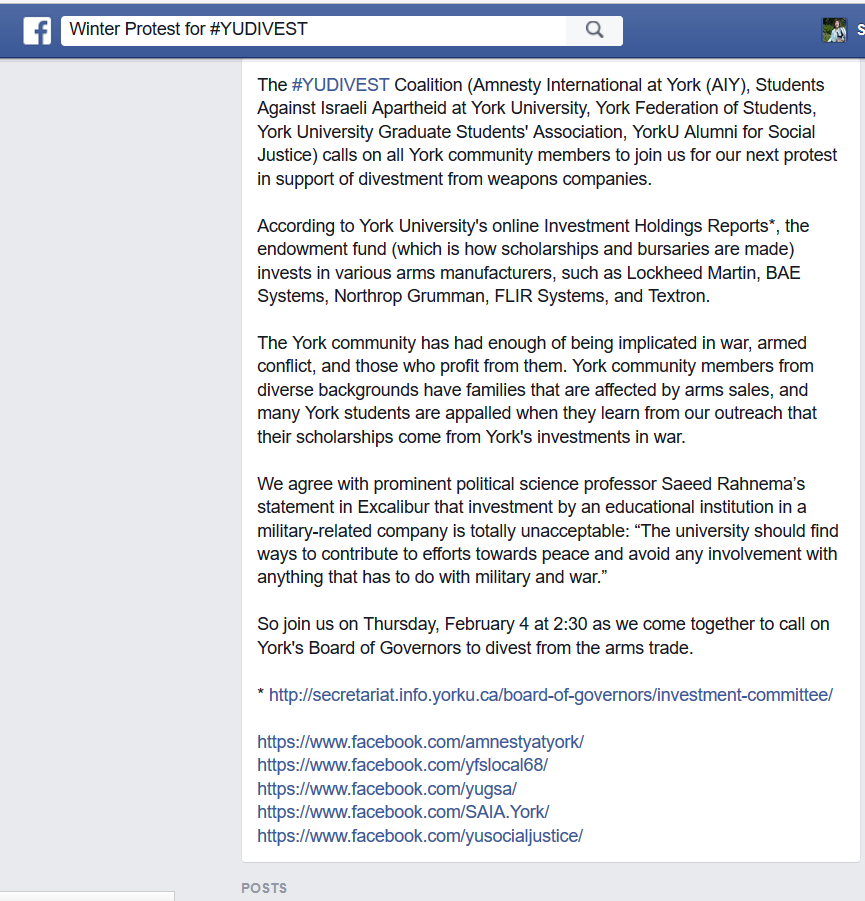 I was there. I saw how both sides can turn an event into something it was not.

Let me say, first of all, that it is well within the realm of student rights to request that their university administration not invest in companies that develop weapons of war. After all, isn’t anti-war protest something university students have been doing for decades? As an undergrad in the early 1970s, I remember anti-Vietnam protests and sit-ins, the Kent University demonstration having taken a tragic turn. It is understandable that students today, not yet awakened to life’s complexities, want their university to have clean hands, at least as far as they know. What is not clean, however, is their invitation above: they claim to be requesting divestment from Lockheed Martin, BAE Systems, Northrop Grumman, FLIR Systems and Textron. Have they not been paying attention to their own successes? The university has already removed four of these from the list of companies in which their endowment fund invests. Only FLIR remains. A small point, perhaps, but I do believe that when one protests one should know what one is talking about.

The first part of the protest was a silent rally in Vari Hall, silent at the request of the University administration. JDL was nowhere to be seen. 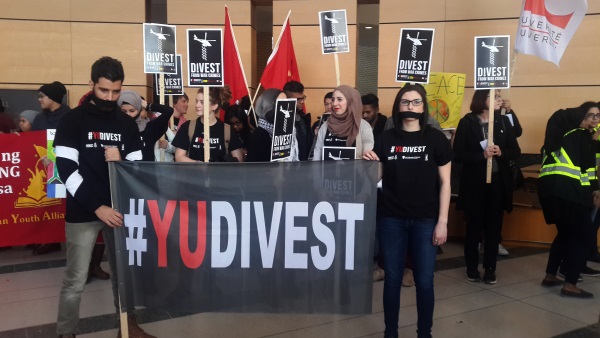 I learned afterward that they were holding a demonstration outside campus. It is possible York Security did not let them in at this point because JDL is not known for being silent regardless of who requests it: 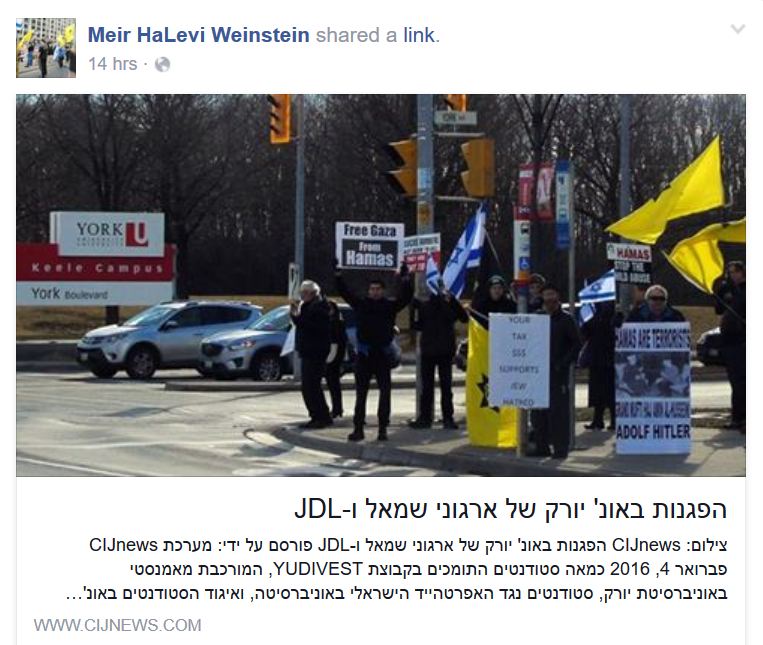 This is the part I was waiting for — the speeches. Would they start bashing Israel? Would they start mouthing off about Israeli “oppression, occupation and apartheid”? Well, aside from a feeble comment by Prof. David McNally about how donors to the university will not dictate what paintings will remain on display in the Student Center, and spontaneous but quickly extinguished onlooker chanting of “Free free Palestine”, nothing else remotely hinting at Jews or Israel was forthcoming. . . .

until the JDL entered the Student Center, that is. Two of them wrapped themselves in the Israeli flag and shouted out stuff that was totally unrelated to what was going on before them. It was unnecessary and, in fact, humiliating. Shouting out that Jews are smarter (sorry, I hadn’t started taping them when one of them was reciting the list of Jews’ supposed superior qualities) does not promote our cause and, in fact, makes us look stupid. You decide for yourself if this represents the Jewish community at its best and smartest:

Was the Demonstration a Success?

The #yudivest organizers claimed this protest to have been a great success: 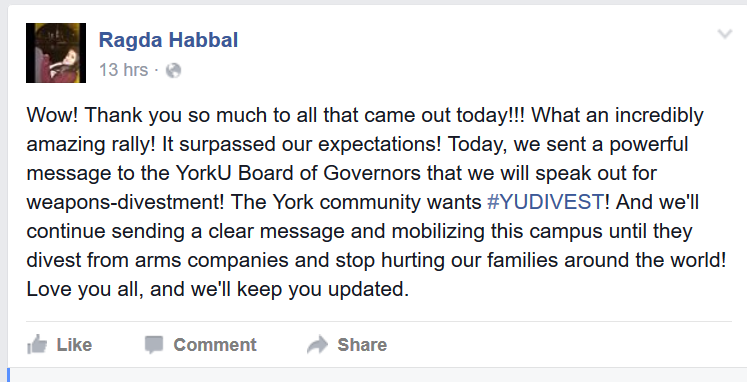 On the event Facebook page, 170 indicated that they would attend. I counted about 80 people – on their side, that is. If you want to include the casual observers and the Jews who came to watch quietly, I still don’t think 170 were there. Even if there were 170 demonstrators, that is still only 0.31% of the student population. Considering the number of supposed attendees with respect to number of invitees (1300), only 13% of these attended. Fewer than 40% is considered a poor response. Therefore, any claims of success for this event far exceed the facts on the ground.

Was the Counter-Demonstration a Success?

According to the JDL, they were a great success as well. 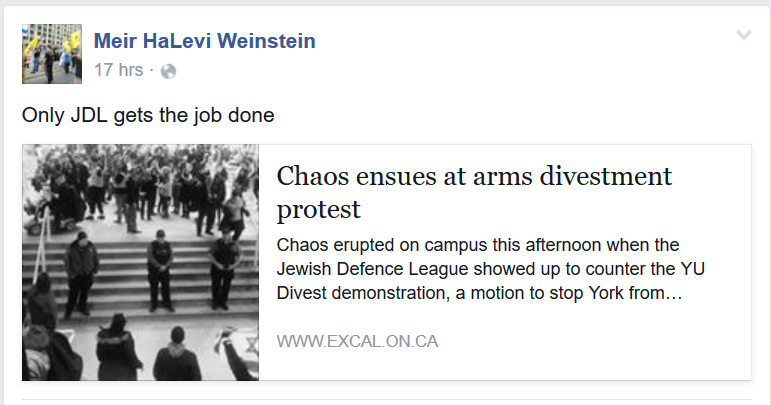 I don’t understand what job the JDL thinks they accomplished. Are they happy only to make noise (and rather feeble noise at that)? If they are seeking to lead to a decrease in antisemitism as they profess, then they failed dismally in this, the opening gambit of what they claim is a campaign to fight antisemitism at York.

Furthermore, I did not witness this “chaos” that supposedly ensued. A York graduate informed me that right after the portion that I had taped above:

the two [JDL] guys turned around and started fighting with 3 students who were standing next to me. One of them (the 3 boys) said, “let’s take it outside,” and then cops [plus, York security staff] intervened and told the boys to go upstairs and be quiet, and told the JDL guys to leave. It was over in 30 seconds.

Is the JDL is satisfied with this demonstration of “chaos”? What does that say about their definition of war, provocation, hate, etc?

From my interactions with the JDL-Canada on Facebook before this event, I am convinced that they mean well and that they sincerely believe that they know better than anyone else how to fight antisemitism. This same arrogance prevents them from working together with members of the Jewish students’ organizations on campus who know the nature of the York University environment and community, and have labored hard to reduce anti-Zionism and antisemitism there. To their great discredit, the JDL demeans and scorns anyone who does not agree with them 100%.

Overall, then, this was a pathetic demonstration on all sides.

Divestment from arms and weapons manufacturers can be a worthy purpose for idealistic students. The underlying anti-Zionism and hatred toward Israel only came out in the social media post-event (see below) and, in fact, it detracts from an otherwise respectable cause. Of course, I am not going to tell antisemites and anti-Zionists how to run their affairs.

Had the JDL not been there, nobody would have felt their absence except for the anti-Zionists who were hoping that “chaos” would ensue.

There are times to make noise and times to remain silent. But, in order to be able to distinguish between the two, one needs to be able to listen and consider all options. Unfortunately, the JDL has shown it is not willing to do either because of its one-track mind-set. And they bulldoze other Jews in the process. That is disappointing because nuances are important, wisdom is important and unity is important.

The greatest victory in this whole episode lies with York Security. They kept the groups apart and prevented the event from turning into a PR stunt for either side.

How it turned anti-Zionist after the fact on social media: 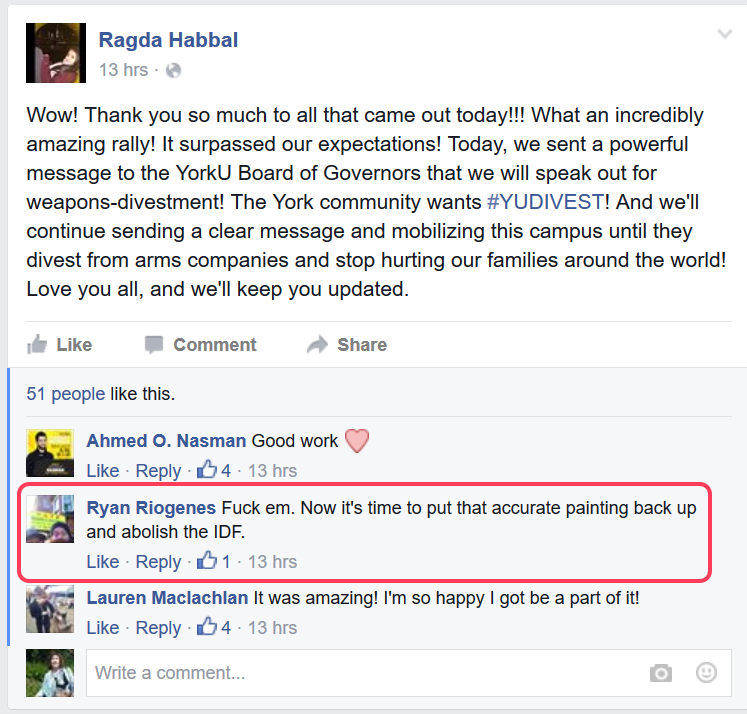