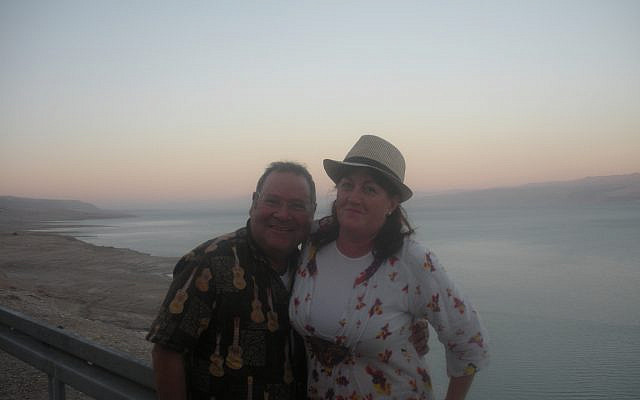 Both wearing Hawaiin Shirts! Mine has ukeleles

My connection to Hawaiian Shirts during our Shutdown

With America and the world entering what looks like a depression for at least a while, Depression articles and the history of the past is coming back. Recently I saw an article:

The History of the Hawaiin Shirt by By Teddy Brokaw was sent to me by friend David Kra and it brings to mind my connection to Hawaiin Shirts. I have taken a few of his points as to what the history of the shirts are.

Mainland Americans long looked to Hawaii to ease their minds. During the Great Depression, Americans cast their eyes toward Hawaii, co-opting another piece of Hawaiian culture: the aloha shirt (this is it’s real technical name).

Though its precise origins are lost to history, the aloha shirt first appeared in Hawaii in the 1920s or ’30s, probably when local Japanese women adapted kimono fabric for use in men’s shirting. The shirts achieved some popularity among tourists to Hawaii and found greater commercial success when they hit the mainland in the mid-1930s. America at the time was riddled with hardship and anxiety, with many men out of work and many others struggling to hold on to their breadwinner status (any similarity to today?). Perhaps in response, hyper-manliness came into vogue—the popularity of bodybuilding skyrocketed, Superman burst onto the scene. It may seem paradoxical that men embraced a garment with such feminine appeal. “You’d better get two or three because it’s a cinch your daughter, sister, wife or even mother will want this bright-colored shirt as soon as she sees it,” the Los Angeles Times teased in 1936. That didn’t stop men from buying. By 1940, aloha shirts were bringing in more than $11 million annually (in today’s money).

One reason men adopted a garment otherwise suited to their sisters’ closet was that rich, famous men wore it. Visitors to Hawaii in the 1930s were invariably wealthy, (had to be able to fly and go) and before long, aloha shirts were being sold by celebrities whom everyday Americans sought to emulate. American heroes from three-time Olympic swimming champion and surfing pioneer Duke Kahanamoku to singer Bing Crosby were lending their names to particular brands. Once the shirt reached stores in the Lower 48, any day laborer could have for just a dollar what before had required an exorbitant trip. A man in an aloha shirt, with its depictions of hula dancers and luaus—“symbol[s] of the comfortable, gay and picturesque,” one journalist put it in 1939—could look the part of the carefree swell.

By the 1960s, the shirt had become truly ubiquitous. Aloha Fridays were a fixture of a certain kind of workplace, and everyone—from Elvis to the decidedly unhip Richard Nixon—seemed to have an aloha shirt. Over time, perhaps inevitably, it lapsed into the realm of corny suburban-dad-wear.

Yet in just the past five years, fashion magazines have been heralding a comeback, and high-end labels like Gucci are taking the aloha shirt to new heights, with prints that draw on Japanese designs favored in the garment’s early days. “People are looking to bring some light, some color, some vibrancy into their lives,” says Jason Morgan, Kahala’s (a shirt manufacturer) general manager. “I think that’s needed now more than ever. If an aloha shirt can help improve somebody’s day, I think that’s pretty powerful.”

My connections are much more personal. Before coming to Jerusalem, I was a California boy. California in the pre 9/11 days had flights going back and forth to Hawaii frequently. The hotels and beaches had to be filled with tourists. Hawaii was the substitute for cruises before they became so popular and cheap. Today, before the virus, there were hundreds of gigantic cruise ships sailing the world to exotic destinations. Before all of this, Americans used to just fly to Hawaii and that was the exotic destination. How the world has changed. California is the closest American destination (it is still a six hour flight) and so tour packages were the rage between California and Hawaii.

I went six times to Hawaii. Different islands and experiences. It was always a challenge finding Kosher food, but my trips were short. There are 8 main islands with hundreds of smaller land masses. The Main Islands of Hawaii 1)Hawaii (the Big Island)2) Maui. 3) Oahu. 4) Kauai. 5) Molokai. 6) Lanai. 7) Niihau. 8) Kahoolawe.
Honolulu with its famous Pearl Harbor and Waikiki is its most famous and most popular visiting spot with most of the airlines flying into that island. Most people never see the other islands as it is a rough boat trip through open ocean or another short flight to get to the other islands.

In Honolulu there was a Chabad when I visited that had Kosher food and services for the one Shabbat that I was there. I don’t know today’s status. On each trip, I would buy Aloha (Hawaiian) shirts, so I had a collection of about 100 shirts when I made Aliyah.

Let me let you in on a little secret, why do men like the shirts? You don’t have to press or iron them and when you have an extended stomach, the shirt covers it up and no one knows if you have a six pack stomach or a pot. This is the secret for most of us overweight people that love them.

But I’m orthodox. But I never bought in the black suit and hat, so I was the only one (and mostly still am) in the Beis Medrash wearing Hawaiian Shirts. I still mostly am but occasionally another fatty shows up in them, or even a slim person. Then I got married and of course my wife wants me to look like everyone else so there is always a battle as to whether I have to put on a white shirt or my colored and beautiful birdy and flowery Hawaiian shirts.

Some days I win and other days she does. But I have been here 7 years, and some of the shirts are more than 10 years old now. The washing machine and time are taking their toll.

Maybe they will start selling them online and I can buy another 60 years of Hawaiian Shirts.

Old Morty Mandelbaum went to the doctor complaining of a terrible pain in his leg.

“I am afraid it’s just old age,” replied the doctor, “there is nothing we can do about it.”

“That can’t be,” fumed old Morty, “You don’t know what you are doing.”

“How can you possibly know I am wrong?” countered the doctor.

“Well it’s quite obvious,” the old man replied, “my other leg is fine, and it’s the exact same age!”