What was it like to speak with Rabbi Shlomo Katz?

Me and my co-host Itai recently had the special opportunity to interview Rabbi Shlomo Katz about Rabbi Shlomo Carlebach.

Our interview began with Rabbi Katz sharing what led him to form a connection with Rabbi0 Carlebach. We continued onto a question that my co-host, Itai, was eager to know the answer to: When is the Even Shlomo on Vayikra coming out?

Not only did R Shlomo gives us an answer, he kindly announced a surprise project that will hopefully be done in the summer.

We went on to ask Rabbi Shlomo Katz what advice Rabbi Carlebach would give us on coping with the Coronavirus, with Itai adding that the question is of special relevance since Rabbi Shlomo was always into hugs, handshakes, and closeness.

In response to our query, Rabbi Katz corrected us, noting that Rabbi Carlebach wasn’t always that way; rather, being physically affectionate was something he had to build up to. R Shlomo Katz went on to point out that Rabbi Carlebach used to say that we need one thing: ‘courage of the heart’. And if there’s someone who needs a hug, hug them (It didn’t occur to me until after the show to ask how are we supposed to do that now!).

For the most part, my co-host Itai led the show. When I chose to ask a question, however, I saw the kindness in R’ Shlomo’s eyes as he patiently heard me construct my questions in my less-than-perfect Hebrew. 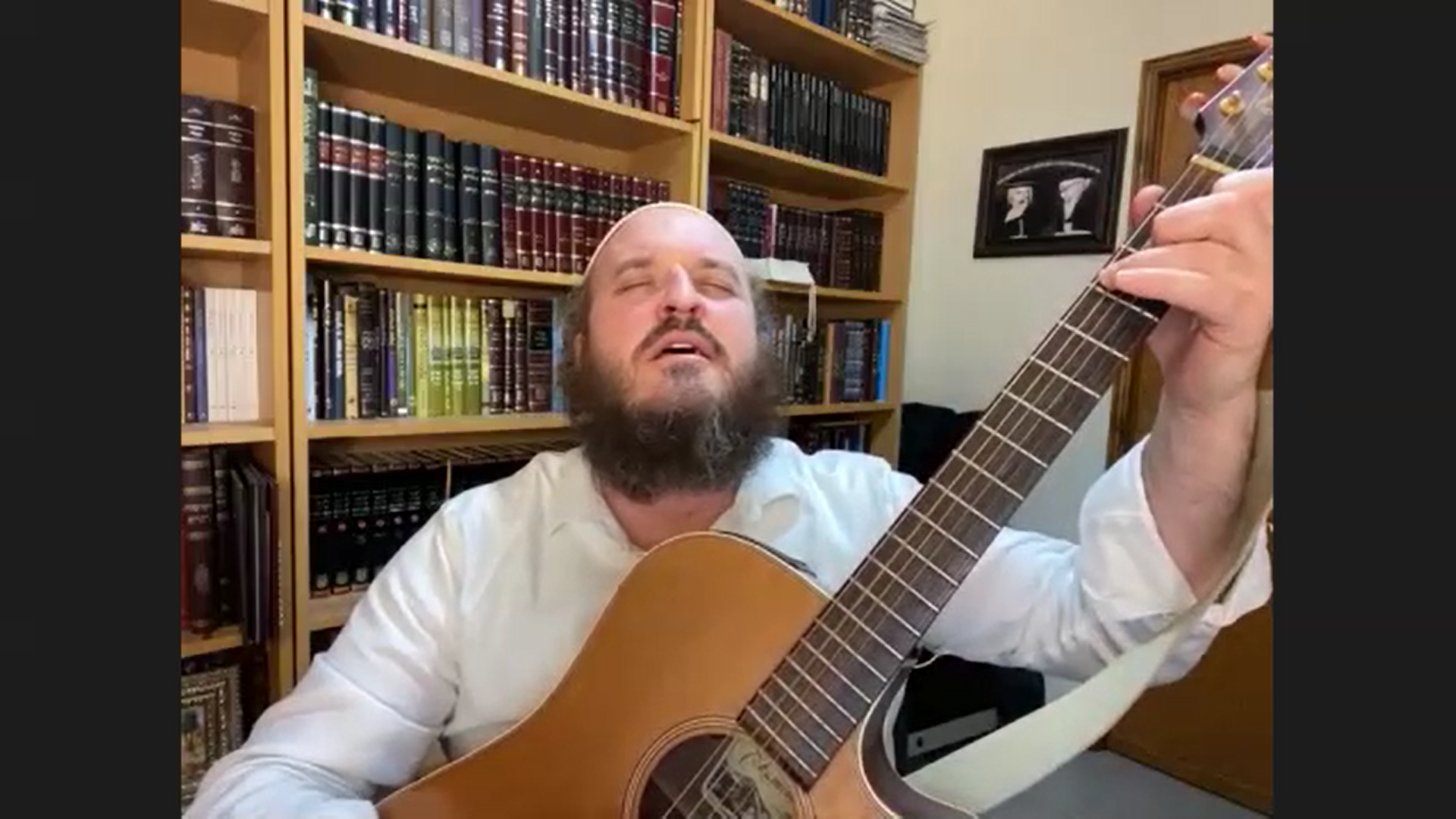 One of the biggest pleasures for me on the show was when R Katz showed us his photograph of R Aryeh Levin that he has in his office, a rabbi who I admire and strive to emulate. As we mention in the show, the competitive spirit between various Jewish sects is something that Rabbi Carlebach couldn’t bear to see during his lifetime. As such, it was refreshing to see Rabbi Katz’s office decorated with portraits of all sorts of Rabbis.

Indeed, a look at Rabbi Shlomo Katz’s YouTube channel reveals his respect for a wide range of Jewish Leaders.

“The best way to spread the light of Rabbi Carlebach is to be Shlomo Katz,” meaning, not a replica or a continuation, but a unique individual, with his own goals, opinions, and aspirations. In my mind, I think of a Yehoshua and Moshe Rabbeinu-type relationship, where Yehoshua was not the “Moshe 2.0”, but something entirely new, and better suited to his time and circumstance.

In Pirkei Avot, we find wonderful advice. What is a straight path that man should choose? A path that brings harmony to the person and harmony between him and others (Pirkei Avot 2:1). In other words, “Be yourself.” Perhaps this is what Rabbi Shlomo Carlebach had in mind when he encouraged our individuality.

Itai wondered, as did I, how can we retain our individuality in an age where everyone is obsessed with what others are doing? How can we get out of this pandemic of depression that has mamash swept the globe, long before Coronavirus was a word on anyone’s lips?

Rabbi Shlomo Katz gave us a few important pieces of advice, among them the importance of hitbodedut. Hitbodedut is finding solitude and speaking with the Creator. I think to stay rooted, so to speak, we need to reconnect with our roots.

Rabbi Katz also spoke about the importance of Torah Learning. “I think he [Rabbi Carlebach] believed… the more he learned the word of Hashem, the more he knew himself.” Keeping in mind that we were made in G-d’s image, this makes complete sense. I’ve heard it said that we talk to Hashem through prayer, and he speaks to us through our learning.

A highlight for me was when our guest told us he doesn’t see himself as a musician, and neither did Rabbi Carlebach (Rabbi Carlebach is famous in the Jewish World for his incredible melodies). Rabbi Katz sees music as simply another pathway he can use to open hearts. Although he has performed around the world, Rabbi Katz feels that it’s time to focus on his family and building up his community in Efrat.

After Rabbi Katz told us that Rabbi Carlebach never saw himself as a musician, I asked, perhaps a bit tactlessly, what is Rabbi Katz’s favorite niggun of Rabbi Carlebach’s. I won’t give away the answer here in the article, but we enjoyed his response and we are sure those who watch will also enjoy it.

Ending the show, Itai and I felt that we gained more from the experience than can be put into words.

You can watch his videos here:

Or hear his music here:

Ethan Yakhin is the co-host of  Open Book with Eitan and Itai, a Podcast both with and about Jewish Authors. To stay updated on upcoming episodes, you can follow Open Book on Instagram. The show is available wherever you listen to podcasts. You can have a look here at their podcast page.