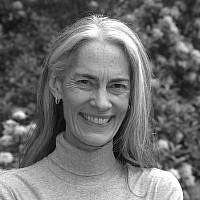 The Blogs
Diane Bisgaier
Treasurer, Hadassah Charlottesville
Apply for a Blog
Advertisement
Please note that the posts on The Blogs are contributed by third parties. The opinions, facts and any media content in them are presented solely by the authors, and neither The Times of Israel nor its partners assume any responsibility for them. Please contact us in case of abuse. In case of abuse,
Report this post. 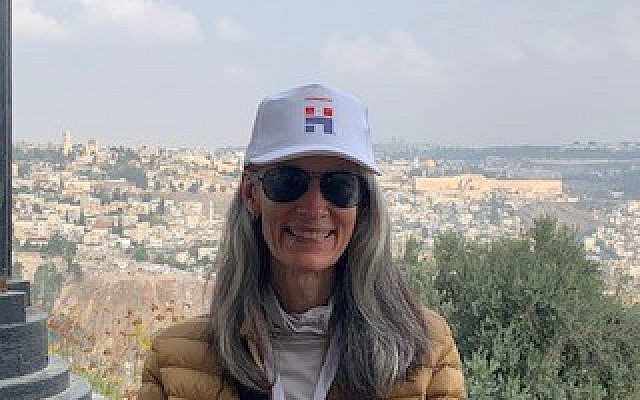 Photo of author at Haas Promenade courtesy of the author. 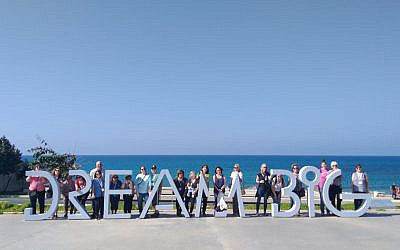 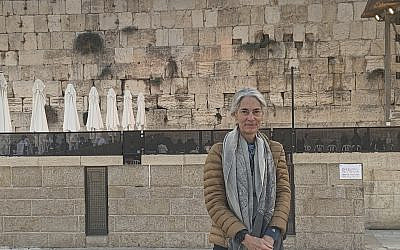 The author at The Kotel. Photo courtesy of the author. 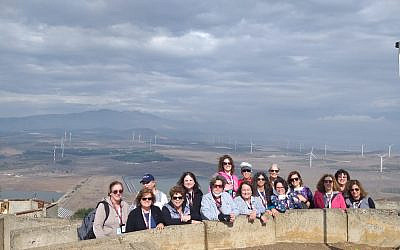 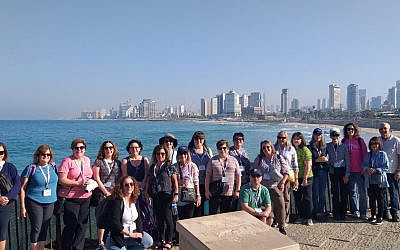 Each of these dates has meaning as they relate to this trip. I really did not begin to learn the long history of Israel, up to and including the current history, until I took a class for conversion. After becoming a member of Hadassah, Israel became more meaningful and relevant to my life in the United States. And when I became president of our Charlottesville Chapter, I intended to travel to Israel on one of Hadassah’s Missions…but the second intifada was happening, so I could not travel there. At the time, I didn’t realize that twenty years would pass before I finally got to go.

Early in 2022, as I began to hear about the  2022 Hadassah 100th Convention in Jerusalem in November, the idea began to take hold that this would be the perfect time to go. Covid was easing, thanks partly to vaccinations and partly to the milder forms then circulating; things were relatively quiet between the Israelis and the Palestinians; and my husband encouraged me to go. I had been to six or seven Hadassah conventions in various cities here in the U.S. and always found them exciting and empowering. But to be in Jerusalem—and for Hadassah’s 100th Convention—would be extra special.

To make the most of my time, and see as much as possible, I signed up for the First Timers’ Tour, a pre-Convention five-day extension based in Tel Aviv. But then I worried. I wouldn’t know anyone—not even my roommate! I was arriving a day early (to make sure I was on time for the start of the tour), and I’d have to figure out transportation from the airport to the hotel, changing money, etc.

All my initial worries and concerns were assuaged when I met the other women—and a few men (husbands)—in the group, as well as our guide extraordinaire, Ronnie Margolin. My roommate Helene Brennan arrived two days late (due to myriad airplane difficulties), but her arrival sealed the deal. We got along great. We were a group of 22 who really had fun together! In addition to the wonder and the learning at all the sites we were seeing, there was lots of laughter.

It was so meaningful to finally see sights that I had only heard or read about for so many years. One example is Jaffa. I had heard the name but never understood how it preceded, but now is part of Tel Aviv. Walking its streets and climbing its steep hills as they rise from the water, I could just imagine it as the bustling seaport it once was, alone for miles on the Mediterranean Sea. Then it was fascinating to see the contrast, a day later, as we explored Tel Aviv and its relatively new (only 100+ years old) streets. These layers of history were just a preview of what I would see in Jerusalem.

I will briefly list most of the many things we did and saw in our five days, which will at least partly illustrate the breadth (unfortunately, no time for too much depth) of our tour. It all made me realize how much more reading I need to do, both regarding the ancient and modern history of Palestine and the tumultuous 20th Century political history. One book that I did (partly) read on this trip was The Source by James Michener. I recommend it; there were many parallels between what I was reading and what I was seeing.

So here is the list, roughly in order: a talk with the Arab founder of an Arab-Israeli preschool in Jaffa; Neot Kedumim, a biblical nature reserve; Latrun, the armored corps museum; Ayalon Institute, an underground ammunition factory; Yitzhak Rabin Center; Neve Tzedek plus lots of walking around Tel Aviv; Peres Peace and Innovation Center; ANU, Museum of the Jewish people; Meir Shfeyah (see next paragraph); Bahai Gardens in Haifa; Safed; a winery; a night at Kibbutz Nof Ginnosar; a jeep ride through the Golan Heights; Mount Bental; lunch in a Druze village; and on our drive to Jerusalem, seeing the separation barrier.

Meir Shfeyah Youth Village was our first Hadassah connection. I had seen photos and videos of this youth village, and our chapter this year specifically raised funds for Youth Aliyah with its annual letter campaign, but nothing compared with seeing this campus. I use the word campus deliberately, because before going there, I did not think of the school/village as being on a campus. But it certainly is, and it is beautifully laid out among the rolling hills, with mature plantings surrounding the buildings dotting the countryside, its amphitheater and auditorium leading finally at the edge to the immaculately-cared-for farm, including both animals and agriculture. The students seemed happy and engaged, as were the staff. It truly looked idyllic, in a practical sort of way. You can see why it is so effective at education and instilling life values.

Back to that bus trip south on Route Six to Jerusalem… Fortuitously, I sat on the east-viewing side of the bus and was able to see the fenced border. It wasn’t much of a fence. But the land just beyond the fence, between the highway and the hills in the distance, looked like a no-man’s-land, geographically. It was a series of undulating moguls, stretching endlessly north and south alongside the road. It was a visual representation of the difficulties that Israel continues to face.

Entering Jerusalem was unique, yet I had a sense of déjà vu. I’d seen so many photos, so many old films, so many illustrations of bible stories…thus there was some familiarity. But of course, it was all new and I couldn’t wait to experience it. For me, to experience a city means to walk its streets, though it was a few days before I could do that, since we were booked up with buses to various parts of the Convention and to our tracks.

But that first night I connected with the other women from our Hadassah Region (Southern Seaboard) and at the end of the opening dinner, we immediately planned our two free days post-Convention. Thank you, Aliza Bricklin, Sharon Goretsky, Sara Jacobs and Gail Moskowitz for showing me so much more of Israel.

Here is a list of my Jerusalem tracks: Menachem Begin Heritage Center; Herodium and Efrat; Hadassah Hospital Ein Kerem; sunrise at the Kotel (an optional offering); and the Western Wall tunnels and Davidson Center.

Then, our two free days: On Friday, we walked all around the old city, culminating in being at the Kotel for the onset of Shabbat and seeing religious Jews of all stripes pouring into the square, an experience oddly of peace and almost riotous joy.

On Saturday, we rented a car and driver and went to Masada and the Dead Sea. We accessed Masada by hiking the snake trail up and down, which enhanced the experience and my imagination.

The Convention had to strike a balance between gathering us together (its theme was “Together in Israel!”) while also giving us plenty of time to see and learn about aspects of Israel and Hadassah. I think it achieved the right balance.

We were all together once each day: Monday, the welcome dinner with a speaker. Tuesday, we initially gathered at the Haas Promenade where we could soak in the view of Jerusalem as well as experience blessings with giant challot and a shofar band; and then we had the energizing and tear-provoking opening program, Hadassah Pride.

Wednesday night was Hadassah Honors, at which the Power of Esther Award was given to Michal Herzog, First Lady of the State of Israel and a lawyer and mediator; and the Henrietta Szold Award was presented to our own Hadassah Past President Marlene Post. It also included Israeli singers and concluded with a mentalist who confounded us all, Lior Suchard.

Finally, on Thursday we had the annual business meeting, Hadassah’s Purpose, followed immediately by Hadassah Celebrates, the fun farewell program with food, dancing, a photo booth, flower designs for your hair, and more.

Being in Jerusalem for the Hadassah 100th Convention worked its magic in an unexpected way. I felt, more than ever, the sense of being part of something so much greater than myself. This is one of the main reasons I volunteer for Hadassah. I love that each member, working with her chapter to raise funds, as well as donating individually, combines with all the other members in all the other chapters across the United States to “advance justice and healing.” To see Hadassah Hospital Ein Kerem was a spectacular physical representation of all our challenging work.

While there, we also saw the people who are the heart and soul of the hospital—both the patients and the medical professionals and staff—with such a variety of backgrounds and beliefs. To get back to my unexpected impression—it was simply that I truly felt, in my own small way, to have helped create this. It was reflected in the message of our 27th National President, Rhoda Smolow, who expressed how proud she is not just of Hadassah, but of each of us and what we do for Hadassah. It all adds up to so much good for Israel, the United States, and the world.

Upon returning home, everyone I know was asking, what did you like best? What are your takeaways? It is impossible to condense eleven full days into a sentence or two. I loved the Old City…all the old walls. I loved to visualize what it must have been like at various points in history. I liked to imagine Jerusalem at the time Hadassah’s Founder Henrietta Szold first visited and began to treat children with eye disease. I loved the fact that it was hard (at least for me) to tell the difference between Arabs and Jews (except for the most religious Jews).

I loved to finally visit Hadassah Hospital Ein Kerem and witness our contributions at work. This trip will help me to speak more knowledgably, and more passionately, about Hadassah’s many projects in Israel.

For videos and photo of Hadassah’s 100th Convention in Israel, please visit this link.

About the Author
Diane Bisgaier is currently Treasurer of Hadassah Charlottsville after serving as Chapter President and in various positions on the Region board, including Area Vice President, Membership VP, and Annual Giving Chair. As Member-at-Large on the Region board this year, she was co-chair, representing Hadassah Southern Seaboard, of the 2022 Tri-Region Conference in Atlanta, Hadassah OUT LOUD: Raising our Voices Together. Originally from New York City and Connecticut, she has lived outside Charlottesville, VA for the past 30 years where she and her husband Hank raised their son and daughter. This was how she discovered the Hadassah Charlottesville Chapter, part of the Southern Seaboard Region. Just two years before this move, Diane’s father-in-law gifted her a Hadassah Life Membership in memory of his beloved wife. The membership really took hold in Charlottesville.
Related Topics
Related Posts
Diane Bisgaier