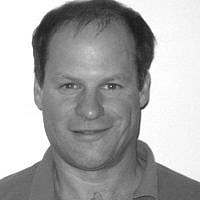 The Blogs
Rich Herschlag
Apply for a Blog
Please note that the posts on The Blogs are contributed by third parties. The opinions, facts and any media content in them are presented solely by the authors, and neither The Times of Israel nor its partners assume any responsibility for them. Please contact us in case of abuse. In case of abuse,
Report this post. 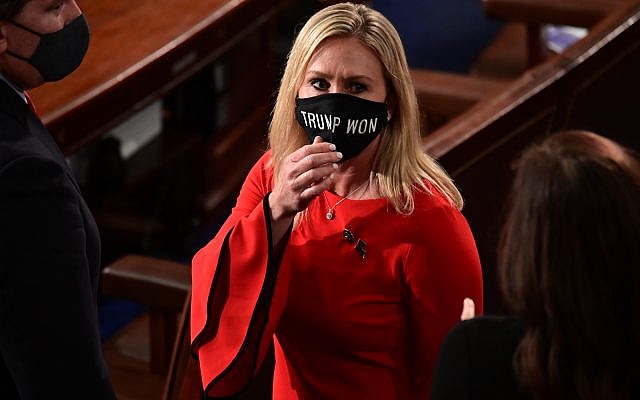 In this Sunday, Jan. 3, 2021, file photo, Rep. Marjorie Taylor Greene, R-Ga., wears a 'Trump Won' face mask as she arrives on the floor of the House to take her oath of office on opening day of the 117th Congress at the US Capitol in Washington. (Erin Scott/Pool Photo via AP, File)

Marjorie Taylor Greene has taken a lot of heat for being what Fortune magazine calls “Trump in Drag.” But this crude assessment completely ignores what she has done for me. Marge, you see, has changed my life. Because of her courage, and hers alone, I can finally tell the world my story.

The first time I started a forest fire was the day of my bar mitzvah. I had just stumbled through my haftarah and all I really wanted was a gin and tonic, a feel from Stacey Feinberg, and ten thousand dollars in cash. What I got, however, was a whole lot more.

I was not thrilled when they pulled me off of Rebecca Levy while we slow danced to “Stairway to Heaven,” but “Rivka” was six inches taller than I was and my family had other plans for me. I was blindfolded, taken through the back of the shul where the help was preparing gefilte fish, and whisked away in some kind of luxury town car. Twenty minutes later the blindfold was removed and there, standing on the tarmac, was Uncle Lazar. He looked like a diminutive Red Baron in his scarf, bomber jacket and aviator sunglasses, but he was all business. “So?” he said. “Today you’re a man?”

What seemed like a moment later we were in a Cessna 172 flying west over the Pocono Mountains in Pennsylvania. I had thrown up several times and wasn’t sure whether it was my fear of heights or the gefilte fish. Lazar thrust a laser into my hand.

“They told me be a doctor, be a lawyer,” he said. “Be a rabbi! But I had a higher calling. As high as God Himself! So I got my pilot’s license and learned how to incinerate deciduous forests.”

My hand shook as I opened the window, looked down, and aimed. I thought about Isaac as Abraham prepared to sacrifice his own beloved son on a mountain in Jerusalem thousands of years before. In the back of my mind I hoped, I prayed I would hear an angel of the Lord cry out “Don’t shoot!” Instead, I heard my uncle’s voice. “C’mon, don’t be a schmuck. We have to have the plane back by six o’clock!”

When I pulled the trigger it was easier than I thought. A red beam of light shot out of the instrument and a second later a silver maple down below was in flames. I can only describe it as a feeling of power. Power like I had never known before. More power than the time at Camp Nock-A-Mixon, summer of ’74, Ellen Liebowitz and I sneaked off into the woods, smoked a joint and French kissed. Then, jarring me from my waking wet dream of world domination was Uncle Lazar. “Let’s get out of here, kiddo. The police are coming!”

As we flew back over the Hudson River, the sun setting rapidly over the western Jersey horizon, listening to radio reports of millions of dollars of damage and a possible UFO sighting, I knew I had crossed some sort of desert, a wilderness even. The little boy lighting firecrackers and tossing them down the apartment building trash chute was gone now, replaced by an older, jaded young man thinking about joining Mossad and copping feels from Israeli girls. But still, I was confused. “Uncle Lazar,” I said. “I have one question. Why? Why?!”

“That’s for me to know and you to find out!”

Slowly but surely I did find out. Training missions over the next few years could be rough, and one time when the FAA was on our tail we had to bail and parachute over some random town in upstate New York. Ironically we landed on the ninth green of a very famous Catskill resort where the guests thought we were part of the entertainment. They cheered and greeted us like heroes, and I almost went to bed with a divorced woman in her 40s.

We were simply fulfilling a covenant

But thankfully, there was also a lighter side to Uncle Lazar. From time to time we would do a circumcision. Lazar called it “freelancing.” It wasn’t easy hitting foreskin with a laser beam from 5,000 feet. Did we miss a couple of times? Yeah, sure. But we learned from our mistakes and the money was good.

Fun and games were finally over in the autumn of 2019. No more Cessna 172. Lazar and I soared in a Cirrus Vision SF50, mission after mission, over the Pacific and Pacific Northwest, fired a military-grade extended-range laser and lit up the night. Remember the Kincade fire? That was ours. So was Walker. So was Saddleridge. There were many more – too many to remember now. Just a middle-aged consulting structural engineer and his demented centenarian great uncle, but now we had a string of hits that would have made Phil Spector proud.

Sometimes the order came from Hillary Clinton. Sometimes it was George Soros. Once – and I wasn’t sure exactly why – the order came from Al Roker. It wasn’t ours to question. Lazar and I were simply fulfilling a covenant entered into a hundred generations earlier at Mount Sinai. There, at the dawn of monotheism and Western civilization, a miracle happened. You might know it as the “burning bush.” Some say it was God Himself who lit the flame but my uncle swears it was his cousins Izzy and Sol who also many years later were rumored to have set an insurance fire in the Bronx.

Uncle Lazar is gone now. It wasn’t COVID-19 or a hit by the Saudis. Lazar was cleaning his laser in front of a mirror and something went terribly wrong. I guess it was his time. He wasn’t a perfect man, but he taught me everything I knew about executing a worldwide climate change hoax on behalf of Zionists, the Rothschilds, Ilhan Omar, Elon Musk, and possibly even Hunter Biden. Sometimes I miss Uncle Lazar and the contests we used to have lighting Hanukah candles from the upper troposphere. Other times I curse him for robbing me of my adolescence and all the cute girls I would have met if I had gone away to that kibbutz during the summer of ’79. But he’s my uncle, and I love him, so every night I look up into the sky and say Kaddish.

About the Author
Rich Herschlag is a writer at The Banter and author or co-author of a dozen books, most recently “Sweating the Small Stuff...and All Stuff: The Complainer's Guide to Shedding Those Extra Pounds.”
Related Topics
Related Posts
Comments