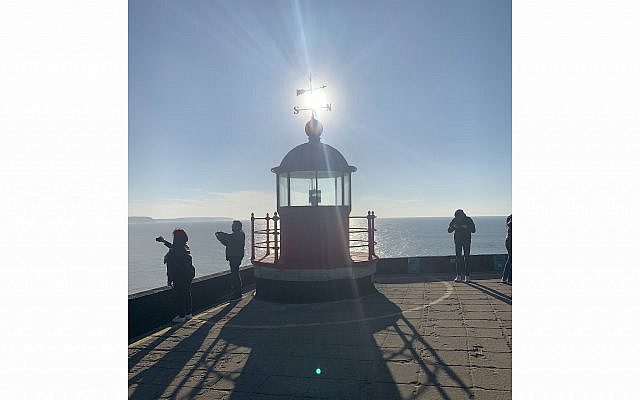 A mother from South Africa contacted our Beit Din in the hopes of converting herself and her two children here in Israel. This work would not call on my skills as a mohel but rather just as a rabbi. Unfortunately, at the time, Israel was not allowing tourists into the country. Luckily, the family had a connection with a rabbi in Portugal who had access to a Mikveh (ritual bath). Since all of us could enter the country, we planned to meet there in mid-November. It was not only lucky for the family, but also for me because Portugal is one of the best surf destinations in the world.

Although I’ve been surfing for most of my life, I’ve never done much surf travel. Seizing this opportunity, I extended my trip. My plan was to have three days of vacation and one day of work.

When it came to the surf, I had no idea what I was in for. Planning a trip so far in advance, it’s almost a guarantee that the surf will be flat. As with all things Mother Nature related, it’s a total crap shoot. But at least I had prayer on my side. So I began to pray.

As the date of the trip finally approached it seemed that my connection with The Almighty might have been stronger than I had anticipated. When I touched down in Lisbon, every surf forecast was predicting one of the largest swells of the season to arrive at that moment. It was projected to be so big that I began praying for something I never had before — for smaller waves.

The surf ended up being epic. Coming from Israel’s sand bottom beaches to Portugal’s rock reefs couldn’t have been sweeter. I surfed amazing waves up and down the coast. But the most meaningful part of the trip came at the end.

On my last free day, I drove north to Nazaré (Portuguese for Nazareth), a sleepy fishing town which happens to be home to the largest wave known to man. The World Surf League holds an annual big wave contest there when the waves are in the range of 50 feet. That may seem like a massive number, but the underwater canyon just below of the famous red lighthouse can produce waves much larger than that. The world record wave was ridden this past October by António Laureano, measuring just over 100 feet.

As I approached the lighthouse, I wasn’t even sure I was in the right place. The road was blocked off well before the actual structure. As with all pilgrimages, the final length of the trip had to be done on foot. It felt like a leap of faith.

The walls inside the building are littered with surfboards twice my height which were used to tackle these mountains of water. It’s an impressive display. But the most moving part is the roof of the lighthouse. It’s possible to see for miles in almost all directions. And even on a small day like when I was there, 10-15 foot waves pounded the rocks below. It was a real spectacle.

After surfing for 30 years, having only seen waves like these in magazines and online, I felt like I had arrived. There was only one thing I could think to do at that moment, and it wasn’t to get my board out of the car. I had to pray. As I finished the afternoon service I realized, I may have been the first person to ever daven mincha in that spot. After all, it was Nazareth. But for all I know there’s probably a Chabad house around the corner.

The next morning I met with the family from South Africa and my two colleagues for the conversion. As with all of our conversions, prior to the immersion, the candidates formally accept the commandments. Just before this declaration, the mother of the family mentioned how she had been struggling for 20 years to make this moment a reality. It seemed that she had reached her own “Nazaré”.

Even though different in nature, Portugal proved to be a pilgrimage on many levels. As trivial as it may seem in comparison, being able to visit places I’ve only dreamed of was one of the most meaningful journeys of my life. But that journey was only made more meaningful by helping this family finally become part of the Jewish people. I’m just sorry it took so long. These are the wrongs my colleagues and I are working to rectify, one conversion at a time.