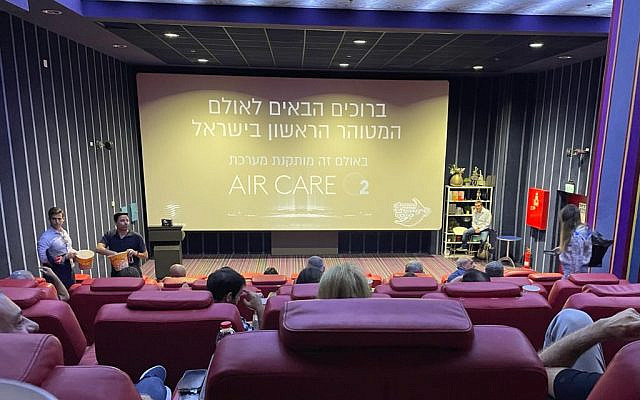 A celebration for the return to normalcy. Credit: James Spiro

Earlier this week, I was invited to Cinema City in Glilot to celebrate the reopening of their 127 locations following COVID-19. The invite came from Tadiran, a company that produces and distributes air conditioning units and air purifiers, and I welcomed the opportunity to return to the cinema. Tadiran was celebrating the fact that its new technology, Air Care 02, was being implemented in all 127 locations to help keep the air clean for cinemagoers after a successful trial.

“I think the cinema really portrays what we’re looking to accomplish,” Jarred Feder, the company’s Head of Business Development told me in the lobby before the screening. “We’re looking to guarantee that people around the world in crowded spaces that people visit a lot can be secure and be assured that they breathe the cleanest air possible. When you look at what a movie theatre represents, it represents families and kids coming together to jointly watch a movie.”

The last time I was in a cinema was in 2019 when I watched ‘Joker’. I wouldn’t call myself an avid cinemagoer – perhaps two or three times a year for the latest superhero movie – but I, like a lot of us, felt a huge void when they were closed during the pandemic. I wanted to return to the cinema and experience a crowded room of entertainment and was eager to see how I would feel returning to the place that used to bring me joy.

It turns out that going to the cinema in a post-COVID world is pretty much the same as it was pre-COVID. You sit down, someone’s bright light from their phone catches your eye, and perhaps you’re irritated by noise from other people. However, I was acutely aware that it was the first time in years that I was watching an action film (‘The Hitman’s Wife’s Bodyguard’) the way it was intended: on a big screen with all the car chases and explosions filling my ears and eyes with pure childish excitement.

Better yet, it was probably the first film in years where my phone remained tightly in my pocket for the whole two-hour adventure — how many of us can say that?

Since the event was open to the press, the confectionery was gifted to guests and so I shamelessly helped myself to a gratuitous amount of ice cream and popcorn. If I felt any sickness or discomfort throughout the movie, it was not because my air was not pure enough – it was a misjudgment brought entirely upon myself!

Afterward, I was delighted by the fact that, for all things considered, the long-awaited return to the cinema was an ordinary experience. It was exactly how I remember it and that’s exactly the way it should be. It is not conspiratorial to think that our changing patterns from the last year would irreversibly cause paranoia among anyone who reenters public spaces. In the US, a nation not known for its stoicism, millions of people are still staying home despite being fully vaccinated. The resistance to a return to normalcy among some has become almost an obsessive virtue signal to those who wish to live an ordinary life after the jab.

Israel is a country with no restrictions in place. We truly are living in a post-COVID world where people can live, work, travel (nationally) all with ease and with no fear of criticism or backlash. Countries around the world are at varying levels of opening up, but we shouldn’t forget the world we left behind last year – and nor should we resist a return to it. Mindless enjoyment among cinemagoers is a shared experience we’ve all lacked. And it’s time to reclaim it.

About the Author
James Spiro is a journalist and editor at CTech by Calcalist. With degrees from the UK and USA, he has a background in journalism, public relations, and political analysis. He has a weekly newsletter that goes out on Fridays (www.JamesSpiro.com/subscribe) and is active on Twitter: @JamesSpiro
Related Topics
Related Posts
Comments
Advertisement