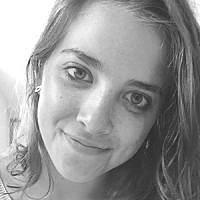 The Blogs
Shoshana Kranish
Apply for a Blog
Please note that the posts on The Blogs are contributed by third parties. The opinions, facts and any media content in them are presented solely by the authors, and neither The Times of Israel nor its partners assume any responsibility for them. Please contact us in case of abuse. In case of abuse,
Report this post.

While we generally regard Shavuot as the time in which our ancestors received the Torah, and a time for excessive amounts of dairy that inevitably upset our (Ashkenazi) Jewish stomachs, this year, for me, it’s much more.

It’s the last festival I’ll celebrate in the United States before making aliyah in three weeks. It’s also the time we read, discuss, and dole out commentary on the Book of Ruth. If you’re not familiar with the story, it describes how Moabite Ruth, the daughter-in-law of Naomi, leaves her home, and in moving to Judea, becomes not only Jewish, but the great-grandmother of one of the greatest Jewish heroes, King David. It’s an incredible story of righteous women and about Judaism, and though I’d never thought too much about it, it’s one that I deeply identify with today.

My whole life, I’ve been Jewish; and I’ve never thought otherwise, nor have I been given any reason to. That is, up until I decided to make aliyah. While the State of Israel considers me Jewish, it just so happens that the Rabbinate does not. So though I was raised in a Jewish household, attended Hebrew school, had a bat mitzvah, studied in Israel, and, of course, went to Jewish summer camp, I’m not quite Jewish enough. My mother, despite her somewhat ironically goyish name — Christine — is a Jew. But, she’s a convert, and a Reform one at that. She and my father raised me Conservative, and did a heck of a job at it. My most identifiable characteristics are my overt Jewishness and my loud and overbearing love for Israel.

So last night, as I sat with the congregation I’ve known my whole life, in the synagogue where my parents were married and where I attended Hebrew school and became a bat mitzvah, the question arose, from the teachings of the Book of Ruth: who is a Jew? The typical answer to this is, of course, that a Jew is the child of a Jewish mother. And while I am the daughter of a Jewish mother, the rejection of her Jewishness — and in turn, my own — means that, upon arrival in Israel, I’ll be faced with the difficult process of an Orthodox conversion if I want to be married in Israel and to have my future children considered Jewish as well. Sharing this story at shul was heart-wrenching, and it brought me to tears immediately.

And as those tears welled up and spilled out, I found by my side not only the rabbi, but the father of a friend I haven’t seen in years, the comforting arms of families I know, and those that I don’t know, and above all, the acceptance of everyone surrounding me.

Forgive me for quoting The Prince of Egypt — though as a 90s kid, and a Jew, this is undoubtedly a classic and a favorite of mine — in which cartoon Moses, standing before the Hebrews in Egypt, says, that though Pharaoh make take away their food and freedom and homes and lives,  “there is one thing he cannot take away from you: your faith.”

The idea that a group of Jews can decide for me whether my Jewishness is legitimate or not, and in doing so, attempt to erase my own identity, is, as a friend put it, anti-Jewish. The challah I baked last Shabbat, and the candles I lit — the only observable, commanded mitzvot for an unmarried woman — don’t matter enough. How is it that a group of seemingly righteous Jews can decide that, because of my mother’s conversion, I should be robbed of my sense of belonging, my sense of self, the only religion and culture I’ve ever known?

So today, just before I leave for Israel, I’m faced with what would generally be seen as an identity crisis. But because of my chutzpah — which was homegrown by a Jewish woman with the word “Christ” in her name and a single Jewish father who has received his fair share of “Mr. Mom” awards — I refuse to let it be. My Jewishness isn’t up for debate; nor should anyone’s be. For any Jew hoping to make a life in Israel, as my young, idealistic 21-year-old self is about to do, this obstacle shouldn’t be one.

Ruth is memorialized in Judaism as a woman of noble character. She is a role model, a righteous figure, a person of good will. That we read her story every Shavuot is significant in ways that I, a self-acknowledged rookie in the study of Jewish history and literature, cannot fathom. In a way, I see a bit of myself in Ruth. She left her home for a future of uncertainty, just as I am doing. But while she wasn’t always a Jew, I have been, and I will continue to be. My Jewishness is something I’ve always been incredible proud of and open about, and my stubborn nature — which will hopefully help me with my forthcoming life in Israel — I shouldn’t be made to feel that I need to prove that to anyone. Ruth was venerated for her actions, not by her great knowledge of Jewish history (which I’m guessing was maybe on-par with the average Hebrew school graduate).

One of those who comforted me at my temple as I told of my precarious situation, suggested that, upon arrival in Israel, I go shake up the system. Change the status quo. Right the wrongs. Reassuringly, I told him that it was precisely my plan.

About the Author
Shoshana Kranish is a recent graduate of Syracuse University and, as of mid-June 2017, an Israeli.
Related Topics
Related Posts
Comments