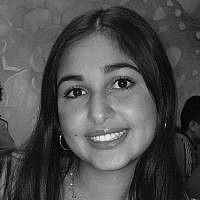 The Blogs
Amanda Cetina
Apply for a Blog
Please note that the posts on The Blogs are contributed by third parties. The opinions, facts and any media content in them are presented solely by the authors, and neither The Times of Israel nor its partners assume any responsibility for them. Please contact us in case of abuse. In case of abuse,
Report this post.

My name is Amanda Cetina, and I am a Pre-Law student at Binghamton University in New York. I am currently interning at Cohen Decker Pex and Brosh Law firm in Jerusalem, Israel. To cultivate a greater understanding of Israel’s Judicial system, my supervisor scheduled the firm’s interns for a tour of the Israeli Supreme Court. Little did I know, but this tour would completely solidify and advance my understanding of Israel’s passionate commitment to democracy.

The tour began at 10 am sharp on July 1st! From a first glance of the exposed building structure, I could tell the Israeli Supreme Court is nothing like the American Supreme Court. The mere entry was flooded with light from panoramic windows, providing a city view. In the courtrooms themselves, natural light trickles through the skylights. As the tour guide explained, the windows, passages, and apertures throughout the building represent the connection and reciprocal relationship between the Supreme Court and Israeli society. The Court is open for visitors Sunday through Thursday from 8:30-14:30, and guided tours are available at no charge. I was in disbelief that I casually walked past attorneys and judges and even observed a Supreme court case. Although many countries allow public court proceedings, the Israeli Supreme Court seemed sincerely concerned with greeting visitors and assuring the utmost concern for their citizen’s needs.

Why was I so surprised?

Perhaps, because the US Supreme Court insinuates exclusivity and looks like a foreign entity that I will never interact with, even as a future lawyer. To even petition to bring a claim to the US Supreme Court, one must first appeal through numerous lower courts and demonstrate controversy and standing, i.e., a sufficient legal interest and injury to participate in the case. Additionally, the American Supreme Court personally selects their cases by judges’ votes. Judges can refuse cases, often political ones, if they believe the Constitution has given decision-making power to another branch of government, if they do not have the proper edicts to decide a case, or if intervention would be unwise.  When all is said and done, the Court only accepts 100-150 of the more than 7,000 cases that it is asked to review each year. The US Court maintains that they use judicial restraint to ensure they don’t expropriate the appropriate roles of the elected branches. This explanation presents like the US government has the people’s wishes in mind, but do they?

In stark contrast to the United States, the Israeli Supreme court decides more than 10,000 cases annually. The Court enables “any person or organization interested in the fate of the detainee” to a right to file a suit, virtually eliminating the US requirement of standing. The Israeli Supreme Court also hears cases both in the first instance and on appeal. The Court cannot handpick all their cases and must decide cases that began in the District Court and are appealed. Consequently, the Supreme Court of Israel hears cases that would not be heard under similar circumstances in the United States, has more justification than in the US, and is required to make controversial decisions and exert judicial activism.

In 2006, the Israeli Court was obliged to determine the legality of Israel’s military practice of targeted killings. If the US Supreme Court was presented with this case, the judges would most likely reject it, holding that the organization presenting the lawsuit lacks standing, not to mention that they would circumvent addressing concerns of specific army tactics, especially political tactics during wartime. However, Israel was obliged to address the issue and ruled in favor of restrictions on military actions against Palestinian terrorists.  The Israeli Court must make controversial decisions, but these decisions are essential to maintaining the Rule of Law and assuring citizens’ voices are heard. Human rights groups praise the Israeli Court as a model of how the Rule of Law should dictate even the most challenging decisions.

What did I learn?

Before I visited the Court, I was unaware of the radical differences in jurisdictions between the US Supreme Court and the Israeli Supreme Court. From the very appearance of the Israeli Court, the welcoming attitude, and the policies in place to ensure all citizen’s voices are represented, it is abundantly clear that justice is at the forefront of Israeli society.