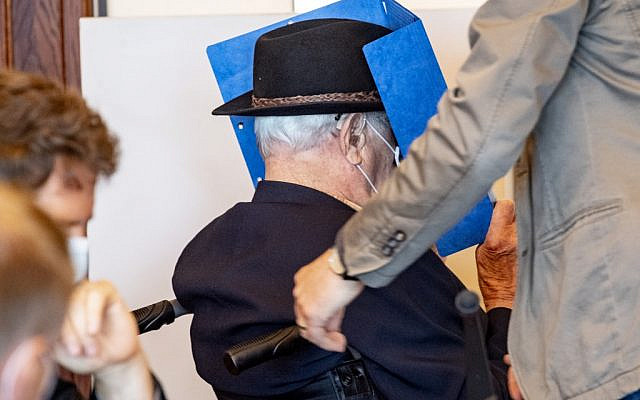 Bruno Dey, a former SS-watchman at the Stutthof concentration camp, hides his face behind a folder as he arrives on a wheelchair for a hearing in his trial on July 20, 2020, in Hamburg, northern Germany. (Axel Heimken / POOL / AFP)

Earlier this week, the Hamburg district court issued an announcement that the verdict rendered late last month in the case of Stutthof SS guard Bruno Dey was now legally binding. Dey was charged with aiding and abetting the murder of 5,232 inmates who were executed, or died of the horrific conditions in the camp, during his service as a watchtower guard, from at least August 9, 1944 through April 26, 1945. He was convicted of the charges and sentenced to two years in prison by Judge Anne Meier-Goering, who explained the basis for the conviction in great detail.

Several days after the conviction was announced on July 23, I received a complete translation of the extremely lengthy verdict, which took Judge Meier-Goering about an hour and a half to read in court. Ironically, I only completed reading it on the day in which the verdict became legally binding, which became a source of deep frustration and anger, as I will explain.

This case posed two important challenges for the German judiciary. One was the fact that Dey was only 17 when he began his service as an SS guard. As a result, despite his current advanced age of 93, he was tried in a juvenile court, where the range of punishments is less severe. His relative youth at the time of the crime also created a certain sympathy for his “plight,” which strengthened the sentiment of many people who questioned the value of such a prosecution at this point in time. A second issue was the fact that there was no evidence that he committed any specific crimes during his service in Stutthof.

Legally, neither of these issues posed a problem. There is no statute of limitations on Nazi war crimes in Germany, nor is there a minimum age for prosecution. Slightly more than a decade ago, moreover, Germany had dramatically changed its prosecution policy vis-à-vis Nazi war criminals, and currently allows the prosecution of any person who had served in a death camp, or a camp with a gas chamber, based on service alone. The country no longer requires evidence of a specific crime committed against a specific victim motivated by racial hatred. Yet, it was clear that the court was well aware of the skepticism of many people regarding the value of such a trial against such an elderly person, and, in the verdict, Judge Meier-Goering directly addressed these issues in an unequivocal manner.

She began by praising the survivors who testified at the trial and their commitment to bear witness, despite the pain involved in doing so. She attributed their testimony to their sense of respect for human dignity, humanity, and future generations, in stark contrast to the defendant, whom she described as a person who saw himself “just an observer of that hell,” a person who, “as a young man of 17-18 years old, saw in those times the suffering of those human beings without suffering as a result.” And she rhetorically posed the question of how a person who was not even a passionate Nazi, could “deprive the co-plaintiffs so easily of their humanity and [was able] to accept that they were turned into numbers and were dehumanized?”

Judge Meier-Goering then addressed the issue of the guilt of a low-ranking participant in Nazi crimes, an issue which arises again and again, particularly in recent years, when the major criminals are no longer alive and those prosecuted are not commanders or officers. Addressing Dey directly, she told him (and the court): “…what we have to take with us from the present proceedings and you simply have to understand, that you as a human being took part in this terrible injustice…and that is the reason that you are to assume responsibility…and to be punished by a state governed by the rule of law, as Germany fortunately is in the meantime…very normal people, such as the…accused Dey, thousands, hundreds of thousands, yes, millions of very normal people in Germany did that to very normal people, thousands and hundreds of thousands, millions of Jews [and others]…Out of indifference. Out of sense of duty. Because of an order. Out of a collective and individual lack of conscience.”

She then proceeded to rip apart the “small cog” argument against prosecuting lower-level perpetrators, and explain why this phrase is so problematic: “The SS guards and others had kept the killing machinery going. No. The accused Dey was no small cog, but a human being and one of hundreds of thousands of people who were conducive to and supported the crimes of Hitler and Himmler, Gluecks [Inspector of Concentration Camps-EZ] and Hoppe [commandant of Stutthof-EZ]. And it was also no killing machinery, but mass murder of human beings, organized by human beings, and implemented with the help of a multitude of human beings…the phrasing of ‘the small cog in the killing machinery’ may illustrate on legal grounds the cooperation of a variety of perpetrators and auxiliaries in mass murder, however, it is simply not objectively the truth about what happened in Germany in those times, but creates a distance to it.”

In the continuation of the verdict, Judge Meier-Goering addressed the defendant’s passivity and lack of empathy for the inmates and expresses her sense of outrage: “You did not manage any internal or external opposition, Mr. Dey, and you thus adapted in the Stutthof concentration camp to the injustice and lack of conscience there within a very short period of time…that adaptation had already taken part of your humanity, your empathy, and your decency away from you. And that is why you…no longer suffered from the daily agony to which the detainees were exposed…and from being together with staunch Nazis…But only, as you told us here, from the monotony of your occupation and the distance from your family. That is why you cried from time to time, Mr. Dey, and not because of the mass murder happening in front of your eyes.”

The judge also included an important, more general message about the significance of the trial and the lessons which can be learned: “Nip things in the bud, when people are depreciated, marginalized, humiliated, deprived of their rights. Nip things in the bud, when racism and injustice become socially acceptable. Don’t look away, but look at it, when people are deprived of their dignity. Be compassionate and be alert as to your own indifference, your selfishness, your comfort of obeying and your adaptability to injustice! Think for yourself and question what is being demanded of you and do not obey where inhumaneness, injustice, murder is being ordered.”

I must admit that I found Judge Meier-Goering’s verdict an incredibly impressive document, one which should be required reading in every educational institution, and which should be distributed to the media in connection with every indictment filed against a Nazi war criminal. Imagine my surprise, frustration and anger to learn that Dey’s two-year jail sentence had been suspended, which basically means that he goes home a happy man, unpunished, while the survivors return to their traumas and nightmares. It was as if the judge was saying that due to Dey’s age at the time of the crime, his immaturity and passivity when he served at Stutthof (as attested to by a court-appointed expert in child psychiatry) outweighed her own very powerful and convincing arguments which justified the prosecution. But without an element of punishment, and none of the four defendants convicted since the change in German prosecution policy vis-à-vis Nazi war criminals has been incarcerated for a single day following conviction, these trials lose a large measure of their significance.