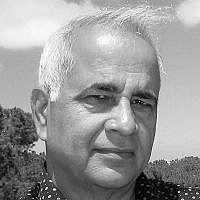 Dr. Ayelet Vilan, a Staff Scientist at Weizmann Institute of Science at Rehovot in Israel, told me during my visit to her labs in 2010, “Yakhmi, do you know, during my childhood, I or other children or even adults never paid for anything procured from the local shops in our village?” Startled, my reaction was – how was that possible! She said, “Because everything on sale at the shops in our village Negba belongs equally to its every resident under the Kibbutz system. If that sounds quite interesting to you, then I would be glad to take you and your wife tomorrow to show you how it works. It is just 40 km drive”. Of course, my wife jumped at the opportunity to see a kibbutz.

Negba kibbutz is located near the cities of Kiryat Malakhi and Ashkelon. Spread over an area of about 12 sq. kilometers, it has about 700 residents. It was founded by Jewish settlers from Poland during the British regime in 1939.

Next day, on November 26, we were driven to Negba by Ayelet’s husband, Dr. Oren Regev, who is a Professor of Chemical Engineering at Ben-Gurion university of the Negev. Ayelet had brought her young son Carmel Regev also along. Upon reaching Negba, we were welcomed by Mr. Gershon Vilan, Ayelet’s father, who though born in Rehovot in 1940, was among the first children at Negba. He has performed several active roles in the running of this kibbutz, all his life.

What is a kibbutz? Drawn from the Hebrew word, it means a “gathering”. A kibbutz is a cluster of residents who professionally do agriculture. The first kibbutz established in Israel was Degania in 1909. With the passage of time, agriculture has been partially supplanted by industrial plants and high-tech enterprises.

A kibbutz is an autonomous local self-governing co-operative entity, offering to its members a hassle-free life, with clean, healthy and quiet rural environment. Besides, in Kibbutz, a member could look forward to medicare, retirement benefits like pension, and no income tax to pay. Historically, there were no salaries received by the people, and they just received the “goods” in return for the work done by them for their kibbutz (This implied no transaction of money, though this system has undergone some changes in the recent past.) All the community services are free and paid for by the kibbutz. In return the kibbutz allots jobs best suited to each of its members, which could be the so-called “blue collar” jobs, viz. a part of the agricultural activity, at a dairy or poultry farm or at its industry. Some members with an extra zeal are entrusted with the “white collar” jobs related to the business management of the kibbutz.

The economy of the Negba kibbutz is based largely on agriculture, poultry, cattle, orchards, vegetables and its two factories, including a large yard to service and maintain the heavy equipment used in agriculture, etc. Mr. Gershon Vilan has played a leadership role in the management of this kibbutz, often alternating between field jobs and business management. He has also extended his services as a business manager to two other kibbutzim, in the neighborhood. 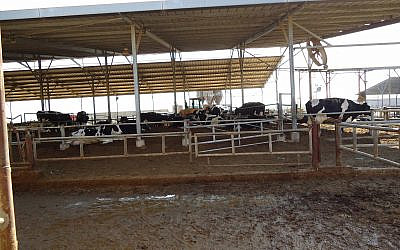 The cow-shed of the dairy co-operative at Negba kibbutz. 2010 Photo courtesy: Author. 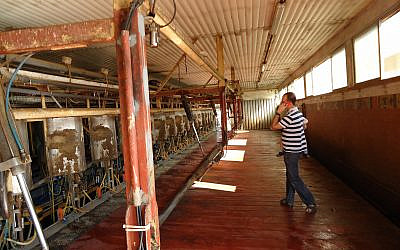 The automatic milking plant at the dairy co-operative, seen after a clean-up. 2010 Photo courtesy: Author.
Advertisement

We saw a large cow-shed and a barn at Negba. The cows are milked using automatic machines. The kibbutz has exclusive ownership of its main productive assets such as the agriculture activity, industrial enterprises and the dairy cooperative.

We visited a well-organized pre-primary school for young children at Negba. While going around the village, we also came across the shops where Ayelet used to pick up candies etc. during her childhood, all for ‘free’. 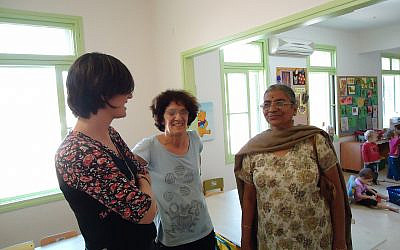 Mrs. Shosha Vilan, Ayelet’s mother (seen in the middle), who performs community duty at the kindergarten at Negba’s pre-primary school (in addition to doing field jobs at the kibbutz, as an agronomist), explains the teaching concepts followed currently to Mrs. Upasana Yakhmi and Ayelet.    2010 Photo courtesy: Author.

The Kibbutz culture goes on, with about 250 or so thriving in Israel currently, each with a population of about 700, on an average. Kibbutzim, with just around two percent of the nation’s Jewish population supply more than 9 percent of the country’s industrial sales and a remarkable 34 percent of agriculture. They don’t just survive, they contribute big to the economy of Israel. Ayelet told us that Negba kibbutz continues to be economically very viable. It provides each of its old residents a pension equivalent to 1000 USD per month.

A few settlers, called ‘toshav’, buy property on the outskirts of a kibbutz and settle there to enjoy the ambience of a kibbutz, but not be bound to it. Negba, too, offers “economically independent membership” to such new members, who become partial partners of the kibbutz, i.e., as registered residents they can claim full rights and obligations to the community activities of the kibbutz such as, education, culture, welfare and infrastructure, but no rights on the productive assets of the kibbutz such as its factories, agriculture and dairy cooperative. 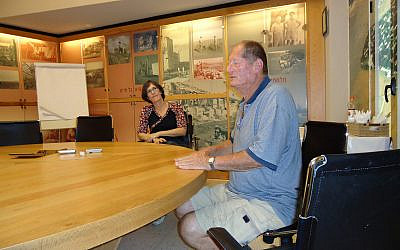 Mr. Gershon Vilan explains the working of the kibbutz and its history at the multimedia center of the village museum. 2010 Photo courtesy: Author.

I recently discovered that another friend of mine, Prof. Reshef Tenne, now an Emeritus Professor at Weizmann Institute, had also spent his childhood at a kibbutz called Usha, set up in 1934 by Zionist Russians. Located about 20 km from Haifa, Reshef’s parents were among the founding members of Usha when they arrived from Poland. Usha kibbutz developed successful glass and plastic industries, apart from agricultural activities. Of course, as time went by, the new generation from Usha went for university education and took up professional jobs in nearby cities, like Haifa and the urban area at its outskirts.

Several Kibbutzim have taken up manufacture of specialized merchandize or activities, that brings them wealth. Drip irrigation, now famous for semi-arid agriculture across the world, was pioneered by Netafim, a company founded by three kibbutzim in the 1960’s. Netafim introduced drip irrigation first in Kibbutz Hatzerim, over 50 years ago.

Kibbutz Lavi in northern Israel has become world’s top producer of furniture for synagogues (Jewish houses of worship). It exports carpentry products to over 70 countries. Kibbutz Eilon, in the Western Galilee, has turned the making music into a kibbutz industry, by converting a chicken coop and former wheat silo into a world-class auditorium and music library. That has made Kibbutz Eilon a popular destination, which provides a temporary home for young violinists, who wish to attend a summer school to learn and play symphony orchestra music, with a music festival thrown in.

Negba has a special attraction for tourists – a war memorial, constructed to honour the sacrifices of the Israeli soldiers who fought the aggression by the Egyptian army in 1948. That war went on for months, during which this kibbutz was nearly destroyed. But, Kibbutzniks fought alongside Israeli forces and emerged victorious in the Egypt-Israel war, pridefully, in the then nascent State of Israel. The Egyptian attack was repulsed from the spot where the memorial stands. The original water tower with bullet marks, and a damaged M22 Egyptian tank, stand close to the memorial, as testimony. 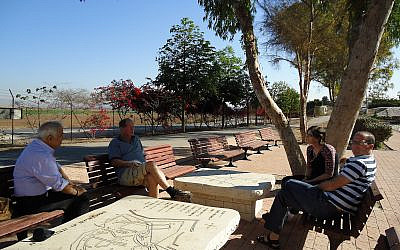 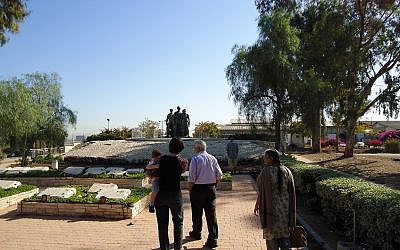 The military cemetery in the foreground of the war memorial. 2010 Photo courtesy: Author. 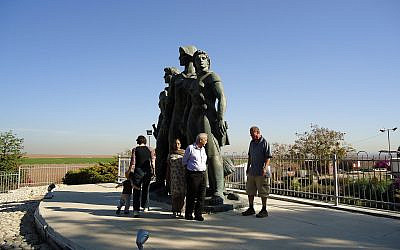 Mr. Gershon Vilan takes the author around the war memorial which is a tribute to the martyrs of the 1948 Egypt-Israel war. It depicts a man and a woman from Negba with a fighting soldier. Mrs. Yakhmi, Ayelet and her toddler Carmel are also seen in the picture. 2010 Photo courtesy: Author.

At Negba, tourists can see a military cemetery, the reconstructed Tower and Stockade, and the first tractor that ploughed in Negba.

Negba kibbutz also has a history museum featuring a model of the Tower and Stockade, to present to the tourists the story of the 1948 Egypt-Israel war, highlighting in the process, the Zionist zeal for building a modern Israel. At the museum, the tourists learn about the major events of modern history of Israel, current-day Negba and the life at a kibbutz.