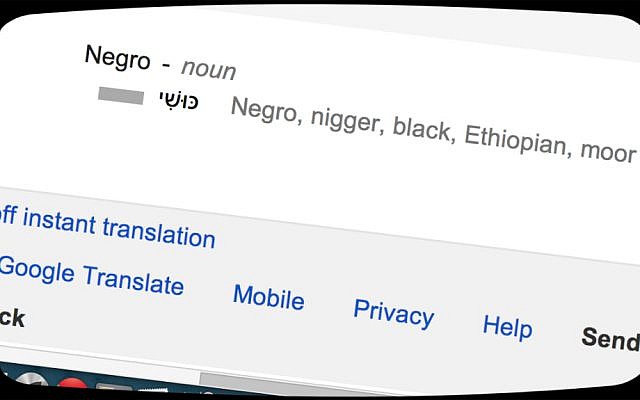 In America, there are a lot of racist jerks. But at least there, they know they’re racist, and that when they say ignorant things about Black people, they might lose a sports franchise. By contrast, Israelis are used to saying whatever they think, wherever they are, and are always shocked (and frequently outraged) when someone finds it personally offensive. Unfortunately, it’s much harder to overcome racism when it’s fully backed by public opinion.

Case in point: Tel Aviv Maccabi, an Israeli basketball team, recently won the European championship. Oded Tira the head of the Israel’s National Council for Sport, actually found it appropriate to congratulate the team by saying

“Congratulations on the achievement, although some people were unhappy that Maccabi played with five ‘kushim’ throughout much of the game.”

With a rousing statement of appreciation like that, it’s shocking that Blacks are not lining up outside the Israeli embassy to offer support.

Time and time again, when an Israeli leader (be it political, communal, religious, or otherwise) trots out the word “kushi”, it leads to a brief flurry of media attention, followed by an unenthusiastic handwave of an apology.

“I do not judge people based on the color of their skin. I’m sorry if my statement was misunderstood and if it hurt anybody,” Tira said eventually.

Misunderstood? I think we all understand. How many times does this need to happen before the point gets across that calling someone with an African lineage “kushi” is unacceptable? It’s not an innocent mistake. It’s a purposeful denigration.

A blogger for IsraellyCool, a more right-wing site, who goes by the name of Zion Mike, accused Silverstein of not understanding the complexities of the Hebrew language, and argued that

Although kushi was once used quite commonly in Israel as a non-pejorative means of describing people of African descent, its use as such is now frowned upon, much as Negro is in the United States. But it is not the N word. Silverstein wouldn’t know that because, well, he’s an idiot.

He then appealed to that most vetted authority on etymology, Google Translate, to prove his point. Here’s the Hebrew to English Google translation.

Apparently, Google Translate has decided that it would prefer to leave out the choice “Nigger” when translating from Hebrew into English. Google did Israel a solid on that one. But did Zion Mike check what happens when you translate from English back into Hebrew? Just for kicks, I did.

Wow. I guess Richard Silverstein isn’t such an idiot after all. I dare you to find an Ethiopian friend or (more likely, if you’re the kind of person who actually is arguing that the term “kushi” is just mildly frowned upon) a passerby, and ask him if he’d like you to say that to his face. Or better yet, to his mom.

Decades after the initial Ethiopian aliyah to Israel, I find it depressing to see the current state of this community. Test scores, employment levels, and wages lag far behind the country’s average. Ethiopian army recruits find themselves in trouble at a rate out of proportion to their actual numbers.

The head of the JDC, Yossi Tamir, says that we are making progress, and points optimistically to the first group to finish the PACT program, specifically designed as a preschool intervention for Ethiopian children. He notes that the test scores for Ethiopian Israeli elementary students are now at 80-90% of those of other Jewish Israelis.

But unlike horseshoes and hand grenades, close isn’t enough. My concern is that without a sustained drive for a more welcoming environment throughout all of the years of school and army service, any gains from early childhood programs will be lost to the sense of disconnectedness from a larger population that just doesn’t understand.

Mr. Tamir’s insistence on a positive spin regarding the status of Ethiopian olim is unsettling. For example, he mentions the appalling fact that 26.4% of grade 12 Ethiopian Israeli students qualified for high level matriculation, but then goes on to say that over the course of the last decade this represents

a full 100% or doubling in the percentage of high school-age Ethiopian Israelis who have secured these matriculation diplomas.

So, in 10 years, we’ve gone from 13% of Ethiopian kids being able to qualify for access to the best colleges to 26% now. Whoo hoo! How can the Ethiopians argue against success like that? And how can anyone be proud of going from 70% unemployment to 40%, if the jobs are mostly minimum wage?

I have seen certain comments reflecting a view that the lack of integration and failure to achieve on a higher level is due primarily to the actions of Ethiopian olim; if they were to participate more socially, they would soon make greater strides educationally and financially. But it’s hard to encourage a population to genuinely embrace a country that feels comfortable calling its members “niggers”, while passing it off with an excuse that there’s no other word, and it’s not that bad of a word anyway. If this is how we treat the Ethiopians in public, how can they trust that the rest of us have their best interests at heart?

In today’s media based environment, is there any excuse for an Israeli public figure to remain unaware of how utterly contemptible the word “kushi” is? When offering someone help, should we continue implementing solutions which are taking decades for minimal results, instead of listening to the suggestions that the Ethiopians themselves are offering? In all honesty, are Israelis truly interested in having Ethiopian olim working in our office buildings if they aren’t cleaners or security guards?

In the Black community, we have a common response for people who try and tell us they want one thing, when they are obviously intent upon doing another.