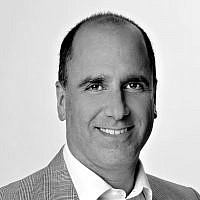 The Blogs
Robert Fattal
Apply for a Blog
Advertisement
Please note that the posts on The Blogs are contributed by third parties. The opinions, facts and any media content in them are presented solely by the authors, and neither The Times of Israel nor its partners assume any responsibility for them. Please contact us in case of abuse. In case of abuse,
Report this post.

I set up a “Netanyahu is a Putz” Twitter page. Over the last four years, I have accumulated a series of hundreds of posts referring to articles (mostly from The Times of Israel), that illustrate how Netanyahu methodically weakens the State of Israel by his actions and decisions. I can’t say it’s a complete or thorough list, but it does offer a basis from which anyone can consult and come away convinced that Netanyahu is far from being the great prime minister his followers believe.

Given the headline of this piece, it’s highly unlikely that this will be a TOI featured opinion (Top Ops). But what else is there to say about the man who can arguably be known as the worst prime minister Israel ever had. It is shameless that Prime Minister Netanyahu can brazenly call an election, while serious charges of fraud and corruption against him are imminent. His own party, filled with like-minded enablers and fraudsters obviously see nothing wrong with constant investigations of various Likud and coalition partners. If it’s true that Netanyahu barters favours for positive press coverage then why should anyone in Likud care that the prime minister is corrupt? That is after all, how they’ve maintained power for so long. Together, they have successfully managed to create an aura of political invincibility around Netanyahu. I have counted at least 10 people associated with the Netanyahu government that have been the focus of investigations, indictments, and convictions. Like the famous mafia kingpin of New York, John Gotti, nothing sticks to him. Accusations abound, but the man still stands.

Domestically, hundreds of career officers of the state, many of them IDF generals and spy agency heads, condemn the man’s policies, even accusing him of weakening the state. Yet few on the right seem worried. People think he is master of the economy, even though economic disparity only widens.

Since he took office, he has thumbed his nose at Israel’s best friends (Germany, England, France, Australia, and the Czech Republic just a few of them) by ignoring their concerns over continued industrial scale settlement expansion, and shows practically no interest in any good faith peace negotiations. It’s no wonder that Israel’s international reputation continues to languish, yet many Israelis are convinced he protects their interests abroad.

Not to mention dismaying episodes like asserting then retracting his claim that Haj Amin Al-Husseini convinced Hitler to “burn the Jews.” Or his government’s war on the Supreme Court. Or his rift from Diaspora Jewry, and his culpability for weakening bipartisan support for Israel in the United States.

The Twitter page is @Netanyahu_Putz, or look up Netanyahu is a Putz on Twitter and you’ll find all of the above examples, plus so much more. It is the gospel truth that the whole is greater than the sum of its parts, this is no exception. People might be aware of individual facts, but dismiss them as exceptions, taken together this is a terrible indictment of a very bad leader.

Perhaps, once people realize how damaging Benjamin Netanyahu has been to Israel they might finally understand that despite his ability to give good speeches he deserves to be forgotten, just like John Gotti.

About the Author
Robert is a freelance political analyst and commentator concentrating on Israeli politics and the Jewish world.
Related Topics
Related Posts
Comments