Public support for Israel’s PM has plummeted, according to polls. He points out that Israel is doing fine but that is not what everyone wants to hear. He did fine. And it’s just a short-lived dip from mean incitement.

Netanyahu’s position was from the start: first save lives because if you first save the economy, you’re going to down the economy more than the other way around. And, of course, there is the old Jewish principle that saving human lives goes before almost anything else. And no restrictive measures were announced that would not be heeded.

The Austrian leader has thanked Netanyahu for making that clear to him, saving thousands of Austrian lives. But a prophet is typically not honored in his own country. It is overlooked easily that Bibi also saved 1000s of Israeli lives. But he did. Many of the mistakes he’s blamed for he did not make. And the baseless incitement against him is on an all-time high.

And what to say to those who want to say that now the economy is in shambles and we’re also all going to die in a second wave?

1. The economy will recover. In half a year, no one will remember the economic hardship we went through. It will get better.

It is important to support people now without a job. But clearly, in the near future, Israel will again have busses running, plane loads of tourist entering and leaving, have restaurants and event halls functioning, etc.

2. There is no second killer wave. Look at the next two recent stats. 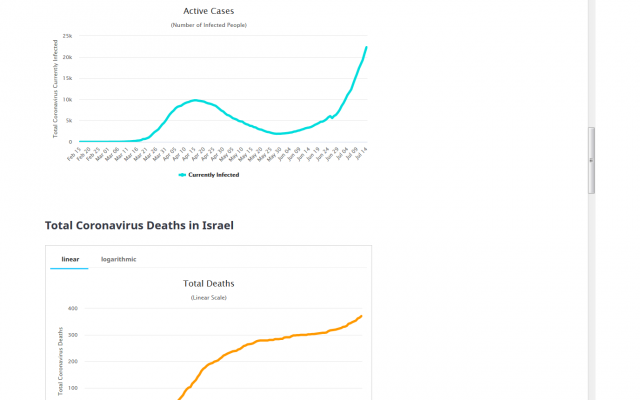 The top one shows an explosion of new cases of the second wave. Much higher than the first wave’s height.

But the bottom one shows the number of deaths, despite the much higher infection rates, climbing much less steep than in the first wave.

It’s possible that the death rate, lagging a few weeks behind the infection rate, will still start climbing steeply again, but that’s not to be expected.

Also, a jump in the number of cases turns out to be an artifact, not real.

In other words: We have here a second wave of a much more infectious virus that more easily infects people — to no fault of the people or the government. But, fortunately, such more-contagious microbes cannot be as deadly (as I predicted and explained 6 weeks ago: here).

At the beginning of this pandemic, we learned that the virus could survive long times on surfaces (counters, door handles). Now we know that they can still be detected after days, but they’re not that infectious there. What will save us is breathing smartly via social distancing:

If we just do that, we’ll continue to do fine in Israel.

A cure may be closer than a safe and working vaccine. Either way, this is not going to last forever. And for a next pandemic, we will be well prepared, both in knowing how to stop it socially and medically.

On the financial front, Netanyahu is smart and practical enough to listen to the smartest pencil in the lot, Andrew Yang, and begin to distribute Universal Basic Income to jumpstart the economy. Good for him! He’s being accused of everything under the sun, but he just wants to do the right thing. Being popular is not his goal anymore. A true leader.

But, I don’t think too many people in the USA can be grateful for their president’s coronavirus response. He used to call it the China virus. That was unfounded and racist. But it would be o so real to start calling it the Trump virus for all his negligence, bullying, lying, and incompetence.