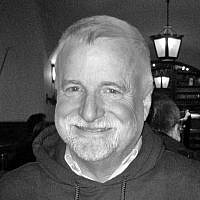 The Blogs
George Rooks
Apply for a Blog
Please note that the posts on The Blogs are contributed by third parties. The opinions, facts and any media content in them are presented solely by the authors, and neither The Times of Israel nor its partners assume any responsibility for them. Please contact us in case of abuse. In case of abuse,
Report this post.

“A Faustian bargain is a pact whereby a person trades something of supreme moral or spiritual importance, such as personal values or the soul, for some worldly or material benefit, such as knowledge, power, or riches.”

If there was ever an example of a Faustian bargain, it is what PM Netanyahu has just agreed to with President Trump and U.A.E. leader Mohammed Bin Zayed (aka MBZ).

When PM Netanyahu proclaimed on Israeli television that this is the first time that Israel has ever made a peace agreement with an Arab country that did not involve land, it was an outright lie.

Once again this is a land for peace agreement–except that this time, the land consists of parts of Area C of Judea and Samaria, the spiritual and ancestral home of the Jewish people.

This “land for peace” point has been emphasized by President Trump who said: “Sovereignty is more than just off the table, they’ve (Israel) agreed not to do it.” And top Emirati official Anwar Gargash who told reporters that the agreement dealt a “death blow” to the Israeli sovereignty movement.

At his televised press conference, a beaming Netanyahu waxed metaphorically about tourism agreements with the UAE that will allow direct flights from Tel Aviv to Dubai and possible Emirati investments in Israel especially in companies working on producing a vaccine for Corona.

Stop and think about that for a moment.

Portions of Israel’s ancestral homeland have been sold for flights from Tel Aviv to Abu Dhabi and Emirati investment in Israel. The pathetic irony is that Israelis are already traveling to and working in the UAE, albeit with 3rd country passports, and the Emirates already invest in Israeli companies.

Israel gains little of value from this agreement, and loses its spiritual heartland.

So what does the future hold?

Does anyone really think that the UAE is going to support Israel in any international venues? Now, more than ever in order to show they are “good Arabs”, the UAE will speak for the Palestinians.

Does anyone really think that the UAE won’t exert pressure on Israel not to fight against Hamas in Gaza and Palestinian terrorists everywhere? Just wait and see how quickly the UAE raises its head the next time missiles from Gaza provoke an Israeli response.

Does anyone really think that the UAE won’t make a grand show of how it has contributed to the Islamization of Jerusalem by getting greater Muslim access to the Al-Aqsa Mosque?  Now that President Rivlin has invited MBZ, we can expect a visit in the near future.

1. Sovereignty for the Jewish communities in Judea and Samaria is dead.  The communities will limp along with the current status quo which permits a house here or there and illegal Palestinian building everywhere.

In his press conference, Netanyahu went on and on about he is obligated to bring sovereignty to Judea and Samaria, and that it is still on the top of his list of priorities.

What utter nonsense. No one on the “right” in Israel will ever again believe any promise Netanyahu makes.

2.  Just a month ago, the head of the Zionist Organization of America, Morton Klein presciently said this: “Bibi hasn’t established a single new settlement as PM, he hasn’t applied sovereignty as promised, he’s not a rightist.” How right Klein was. Benjamin Netanyahu has now firmly ensconced himself in the camp of Israeli prime ministers who saw “making peace” at the expense of the Israeli people as their highest priority and the source of their legacy (think “Rabin”, “Barak”, and “Olmert”).

What Netanyahu will now forever be remembered for (aside from being the first Israeli prime minister to serve while being indicted) is missing the opportunity of a millennium to cement Israel’s rights in Judea and Samaria.

3. It is beyond absurd for Netanyahu or anyone else to compare this agreement with the UAE with those of Egypt and Jordan or to talk about how it is “a historic moment” vis a vis the Arab world.

Egyptian and Jordan are on our borders and had fought costly wars with us. Egypt in particular was and is the largest Arab country in the world, and the Arab country with the largest army. The UAE has no border with us, has fought no wars with us, and can barely even be called “Arab.”  Of its 10,134.083 population, only 10% are citizens of the UAE. The rest are foreign (mostly non-Arab) nationals. In total, foreign nationals outnumber Emirati citizens by more than 10 to 1.

3. This hardly seems like a political moment, but another “accomplishment” of Netanyahu is that he has boosted the stature of Benny Gantz immeasurably. Instead of being remembered as the incompetent buffoon that he is, Gantz will now be regaled by the leftist domestic and international community as the person who stopped sovereignty and thereby led the way to peace.

In sum, Netanyahu has made a Faustian bargain.

The above blog first appeared on OneIsrael.org on August 14, 2020.

About the Author
George Rooks is a retired faculty member of the University of California, Davis. A lifelong writer, he has been writing the israelstreet.org blog for more than two years with readers in more than 100 countries. Long time chairman of the largest committee in his synagogue back in northern California, he directs numerous Israel advocacy projects in his locale and is a well-known speaker in the area. He and his wife live half of each year in California and half in Ashdod.
Related Topics
Related Posts
Comments