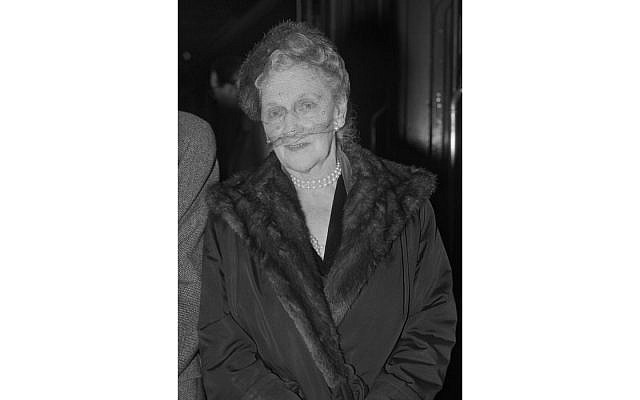 Nancy Astor, Viscountess Astor, who was the first woman MP to take her seat in Parliament. (Photo credit: PA/PA Wire)

On 10 June I posted at this site a blog that addressed the grotesque mania currently afflicting the UK, the central feature of which is the destruction – sometimes by means of unrestrained mob violence – of effigies of those deemed to have engaged in and benefited from the North American slave trade in the 17th, 18th and early 19th centuries.

This mania has been incubating and spreading for some years, but entered a new, frenetic phase with the destruction in Bristol of the statue of slave trader Edward Colston, and the removal of the London Docklands statue of another slaver, Robert Milligan. Now, London Mayor Sadiq Khan has announced a Commission to review the capital’s landmarks to ensure they reflect “diversity.” Statues and street names in the capital that link to slavery “should [Mr Khan opined] be taken down.”

To assist that review, I named four individuals whose effigies seemed to me ripe for removal on account of their gross, unashamed anti-Jewish racism: William Gladstone; James Keir Hardie; David Lloyd George; and Ernest Bevin. All four were of course men, and for that reason I have been criticised – quite rightly – for not incorporating gender balance into my choices. For that omission I wish to publicly apologise and, to make amends, I offer the following list of females of the species whose statues and memorials (not all in London, I admit) should be removed forthwith from public gaze:

In 1919 Nancy Astor became only the second woman to be elected to Parliament (the first was Constance Gore-Booth the previous year), and the first to take her seat in the Commons, as Conservative MP for Plymouth. In Nancy’s view it was the Jews who caused antisemitism and in her correspondence with US ambassador to Britain Joseph Kennedy she revealed herself as a Jew-hater, linking Jews to the spread of communism and hoping that Adolf Hitler would be able to solve these “world problems” [her phrase]. Last year a statue of Nancy was unveiled in Plymouth by former Tory Prime Minister Theresa May. This statue must go!

In 1892 the young sociologist Beatrice Potter married lawyer and fellow socialist Sidney Webb. Three years later the couple established the London School of Economics, and they were instrumental in founding the Labour Party, whose first constitution they drafted. In the book Industrial Democracy, which Beatrice co-authored with her husband in 1897, Jews were described as a “constant influence for degradation.” She was also quite contemptuous of Jewish suffering. “I can’t understand why the Jews make such a fuss over a few dozen of their people killed in Palestine,” she lectured Zionist leader Chaim Weizmann after the Hebron massacre of 1929. Whilst there is no statue of Beatrice in the capital, a painting of Mr & Mrs Webb hangs on public display at the LSE and a blue plaque outside the Webb’s residence in Hampstead affects to memorialise them uncritically as do-gooders. These depictions must go!

Advertising copywriter, detective-fiction author and poet Dorothy Sayers is probably best known today for her novels featuring the aristocratic sleuth Lord Peter Wimsey. Whilst it is true that she had a passionate affair with a Russian-Jewish émigré, her fiction is shot through with trite Jewish stereotypes, about which she was quite unapologetic. During the Second World War BBC radio ran The Man Born To Be King, a series of twelve plays, authored by Sayers, that depicted the life of Jesus of Nazareth. The work was controversial at the time, and continues to be so in part because of its crude depiction of Jewish characters. Sayers spent much of her later life in Witham, Essex, where a statue of her stands opposite the house in which she lived. This statue must go!

Marie Stopes, a poet and botanist who became the first female academic to be appointed at the University of Manchester, was a pioneer of birth control. There’s a nationwide network of family-planning clinics named after her. But her devotion to family planning derived in part from her obsession with eugenics, and with her fear that the lower orders of society might – unless checked – produce offspring in such large numbers as to permanently degrade humanity. This obsession led to her becoming a very proud public supporter of Nazism. In 1935 she attended a Nazi-sponsored “Congress for Population Science” in Berlin. She even sent Herr Hitler a collection of love poems. In a poem that she wrote in 1942 she declared “Catholics and Prussians, The Jews and the Russians, All are a curse, Or something worse…” In 2008 a bust of Marie Stopes was unveiled at Marie Stopes House, Camden. The clinics must be renamed and the bust must go!

PS. My attention has been drawn to a list of some 60 individuals whose statues a movement known as “Topple The Racists” wants removed. Nancy Astor does indeed appear on this list, but not Beatrice Webb, Dorothy Sayers or Marie Stopes. An accidental oversight, surely?