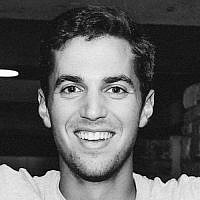 The Blogs
Grant Prengler
Apply for a Blog
Please note that the posts on The Blogs are contributed by third parties. The opinions, facts and any media content in them are presented solely by the authors, and neither The Times of Israel nor its partners assume any responsibility for them. Please contact us in case of abuse. In case of abuse,
Report this post.

The 2015 March of the Living was an unforgettable experience that started in Poland, and toured Birkenau and Treblinka, among other sites.

After the emotionally draining experience in Poland, we traveled to Israel to celebrate the rebirth of the Jewish people. In Poland, in a former death camp, surrounded by 15,000 people from across the globe, the last thing I would have expected was to run into a long-lost family member.

It is just as unimaginable to think that I could sit down for lunch with the grandchild of the man who saved our family in dire times, in the Shoah.

However, that is just what happened to my cousins and me this April halfway across the globe.

My grandfather’s family in prewar Poland consisted of two parents and 13 children (some with children of their own). My great-grandfather’s two brothers had moved to Argentina before the war, removing them from harm’s way when war broke out. When the war was over and my family was liberated, only my great-grandmother, five surviving sons and their young families (17 people in total) remained. They immigrated to Texas and began their new lives, keeping in touch with the heroic families who had hid them in barns and chimneys for the duration of the war.

Recently, with the help of Facebook, lost relatives were discovered in South America and contact was made. However, there were still questions: How many more are there? And, where can we find them?
One part of our question was answered less than a month ago in the vast, horrifying camp known as Birkenau.

On the March of the Living, participants march from Auschwitz to Birkenau (just over 1 mile). Once you arrive at Birkenau, everyone places placards with a personal family sentiment or messages of hope along the eerie train tracks entering and inside the camp. Alexandra, Jake and I had hoped to put ours together as they all bore the same name boldly across the center of the wood: PRENGLER. However, Jake had given his placard to a friend for safekeeping during the March and was now unable to find her to retrieve it. We were all disappointed that ours wouldn’t be together but due to time concerns, Alexandra and I decided to place ours down and move inside the camp.

Just prior to the ceremony at Birkenau, Jake fatefully found the placard and began to place it on the railroad tracks.

After noticing the placard, a girl came up to Jake and inquired about it and the last name Prengler, saying that her mother’s maiden name is Prengler. Shocked and confused, they got to talking and, lo and behold, her great-grandfather was one of the Prengler brothers who had moved to Argentina before the war, making our great-grandfathers brothers.

So here we are: in the Birkenau death factory. Surrounded by 15,000 Jews from five different countries. And it just so happens to work out that this girl, a newly-found cousin, Julia Cohen of Los Angeles, is walking by at the very second in the exact spot that Jake finally gets to place his card on the tracks. Talk about a little wink from above. It is hard to find the coincidence in the situation.

A few days later, with weeks of back-and-forth emails, Jake, Alexandra and I had the privilege and honor to meet Zbyszek Mokicki, the grandson of Vashik Mokicki, one of the men who hid the Prenglers during the war. Due to the March’s scheduling, we only had one hour over lunch to meet, discuss our families’ shared history and ask questions. Along with running into Julia, I think that the three of us can agree that this was one of the more profound, special moments on the already amazing trip that we were on. The grandchildren of Holocaust survivors meeting with the grandson of their righteous saviors.

These two added elements of the trip enhanced the experience a hundredfold and it would greatly surprise me if any other participants had as unique a family experience as we had.
We can only hope that our late family members orchestrated these jaw-dropping moments, allowing the unimaginable to become reality.

About the Author
Prengler is a recent graduate of the University of Texas at Austin where he studied Government. He is currently living in Tel Aviv while he applies to law schools in the U.S. He was born and raised in Dallas, Texas.
Related Topics
Related Posts
Comments