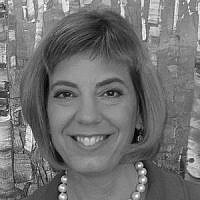 The Blogs
Jennifer Laszlo Mizrahi
Apply for a Blog
Advertisement
Please note that the posts on The Blogs are contributed by third parties. The opinions, facts and any media content in them are presented solely by the authors, and neither The Times of Israel nor its partners assume any responsibility for them. Please contact us in case of abuse. In case of abuse,
Report this post.

I’ve met the next President of the United States! Mind you, I don’t know who that is, but I know I have at least shaken their hand, and spoken with them on disability issues. That is because in the last months our team at RespectAbility has attended countless town hall meetings and speeches by all the presidential candidates in Iowa and New Hampshire. RespectAbility works on Jewish inclusion and a whole lot more.

Our team is different than the hundreds of other reporters as we are made up exclusively of people with disabilities and the people who love them. Now, election day in New Hampshire has finally arrived and the voters get to decide. The stakes are, as one candidate would say, “HUGE.”

It’s been 25 years since the Americans with Disabilities Act became law. Yet only 41.8 percent of New Hampshire’s 77,800 working age people with disabilities are employed. This lack of opportunity creates poverty, powerlessness, and even can increase the risk of developing a mental health condition. Jobs, mental health and addiction are key issues in New Hampshire for people with and without disabilities. They are just some of the 16 issues candidates addressed in specifics in RespectAbility’s 2016 New Hampshire Candidate #PwDsVote Questionnaire.

Fully 1-in-5 Americans have a disability. A recent survey done by the University of New Hampshire confirms that the majority of them are striving to find work. While persistent stigmas remain an obstacle, the evidence shows that people with disabilities can be highly successful workers. For example, Virgin Airways founder Sir Richard Branson and finance wizard Charles Schwab are dyslexic. Scientist Steven Hawking, like Gov. Abbott of Texas, and President Franklin D. Roosevelt before them, are wheelchair users.

Today in New Hampshire 5,900 youth with disabilities between the ages of 16 and 20 are preparing to enter the labor pool. In the past many either went from school to their parents’ couch – with no jobs – or they went into a sheltered workshop where they were paid sub-minimum wage to complete tasks below their worth. These young people have high expectations and deserve the same opportunities to achieve the American dream as anyone else.

Young people with disabilities may simply need some thoughtful help to transition into the workforce. People who are blind, deaf or non-verbal frequently use assistive technology. Similarly, people with intellectual disabilities can benefit greatly from internship opportunities and job coaches. Pepsi, Google, Walgreens, EY, Lowes, AMC Theaters, and other companies have seen that people with disabilities are extremely capable and loyal workers.

Vocational rehabilitation programs in New Hampshire helped 1,087 people with disabilities find work in 2012. However, they can do much more in the future. Under the new Workforce Innovation and Opportunities Act, Gov. Maggie Hassan can further break down silos between the branches of government so that education, transportation, workforce development, healthcare and other department work together to create a strategy to enable people with barriers to work can obtain jobs and careers.

One of their first steps should be to focus on programs that are proven to succeed. Public-private-philanthropic partnerships, along with programs such as Project SEARCH and Bridges to Work, can bring further breakthroughs and success that will be win-win-win for people with disabilities, employers and taxpayers alike.

The next President will have a big role to play on healthcare, jobs, crime and a whole host of issues. To learn where the candidates stand on the issues, see www.TheRespectAbilityReport.com.

The top candidates from New Hampshire will go next to South Carolina where I hope they will look in on the Walgreens distribution center that is a model of inclusion. They also will go to Nevada where they can see best practices in hiring people with disabilities at the Pepsi refurbishing plant in Las Vegas or the Starbucks facility in Reno. It’s vital for candidates to learn the facts and offer the best plans and energy possible for the future.

Meanwhile, if you want to see history in the making, join our team at 10:30 AM tomorrow at Green Street Community Center in Concord New Hampshire where a new voting system for the people of New Hampshire with disabilities will first be used during Tuesday’s primary!