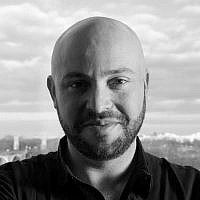 The Blogs
Jonny Daniels
Apply for a Blog
Please note that the posts on The Blogs are contributed by third parties. The opinions, facts and any media content in them are presented solely by the authors, and neither The Times of Israel nor its partners assume any responsibility for them. Please contact us in case of abuse. In case of abuse,
Report this post.

I have known Donald Trump for many years and have a personal connection with him.

Tuesday night was an amazing victory for democracy, a clear proof of the power of the people and a victory for the state of Israel.

I did not publicly endorse him; it’s not my place as a foreign citizen and I also took offence at some of his comments. I did, however, act as an adviser to parts of his campaign. I did so because I believe he will be a good president and will take care of what I hold dear; he’ll improve relations between the US and Israel, show strength towards Iran and give us the leadership we have always looked to the United States for.

In all my conversations with him, both with others and in private, I was always impressed by his broad knowledge on complicated issues, by his willingness without hesitation to make a video I produced endorsing Prime Minister Benjamin Netanyahu and by his willingness to meet with a young and relatively unknown Israeli Member of Knesset (now Israel’s ambassador to the UN). On a personal level, he always made me feel good; every time we spoke, he would comment that he likes speaking to ‘someone so young and knowledgeable’. Many people would look down at a 20-something-year-old, but he didn’t care.

One of the biggest issues we discussed was the deal with Iran. It was something that personally bothered him; he couldn’t fathom the weakness shown by President Obama and didn’t understand why the US would attempt any negotiation with people calling to wipe Israel off the map.

I’m absolutely certain that, within his first weeks of presidency, we’ll see a different attitude towards our mutual foes.

I never saw anti-Semitism or racism in the dozens of times I’ve been to his office; his multicultural staff always impressed me.

For those that built him, then berated him, for those who disgustingly equated him to Hitler, and his supporters to Nazis,  they should take time for soul searching. They didn’t just insult him, they insulted the majority of Americans who voted for him.

We must respect the will of the people and the next president of the US.

Donald Trump will not just make America great again, but he will make the world a better and safer place for us all.

About the Author
Jonny Daniels (34) is the founder of the From The Depths Foundation a foundation working in the field of Holocaust memory memorial and education, with a focus on Righteous Among The Nations and Holocaust Survivors, spending his time between Tel Aviv and Warsaw, Poland. Jonny also runs a successful PR group consulting for international business and formerly worked as Cheif of Staff to former Deputy Minister of Defence for the State of Israel Danny Danon. He is a highly sought-after commentator, being quoted in many of the world’s leading publications including, The New York Times, Wall Street Journal, CNN, Fox News and more.
Related Topics
Related Posts
Comments