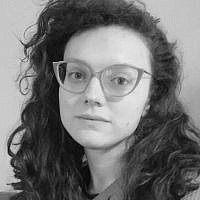 The Blogs
Mikhala Kaseweter
Apply for a Blog
Advertisement
Please note that the posts on The Blogs are contributed by third parties. The opinions, facts and any media content in them are presented solely by the authors, and neither The Times of Israel nor its partners assume any responsibility for them. Please contact us in case of abuse. In case of abuse,
Report this post.

News broke last month that a team of Israeli scientists have genetically engineered hens who lay eggs that only produce females. The Volcani Center embryologists’ feat is the culmination of seven years’ hard work and an agricultural first. With the potential to “halt the destruction” of unwanted male chicks, the team’s achievement has been hailed as a boon to animal welfare, but this victory is not quite as splendid as it may seem.

For those unfamiliar with modern agricultural practices, it may sound bizarre to spend seven years trying to bring about female embryos. Put simply, male embryos are a significant drain of resources in the eyes of agriculturists. Because it’s standard practice to slaughter laying hens at just 1 or 2 years of age (when egg productivity begins to decline), the egg industry has to regularly replenish its hen population. If you kill a hen, you need to breed a new one to replace her.

The trouble is, although males are considered useless, egg companies cannot easily determine the sex of younger embryos in the eggs they incubate. Their solution? Bring all fertilized eggs safely to hatch day only to kill the male chicks upon hatching, in a systematic elimination known as culling, or more callously, “disposal.” Culling has historically entailed grinding the birds alive and whole, but with the rise of ventilation shutdown in recent years, suffocation has gained popularity as well. Thus, the Volcani Center scientists’ discovery is being celebrated on both ethical and financial grounds: incubating only female eggs will halve the cost of hatching and eliminate the cost of male chick disposal.

As for the ethics, this is where things start to get hairy, er, feathered. If lead researcher Dr. Yuval Cinnamon’s genetic engineering technology were adopted worldwide and became the industry standard, an estimated seven billion lives would be spared every year. This is true – in a sense. Genetic engineering would save male chicks’ lives by preventing their existence in the first place rather than by preventing a hatched, conscious, sentient creature’s death.

Until now, animal advocates’ preferred solution has been in-ovo sexing methods. In-ovo technology enables male chicks to be identified while still in the egg. One such technology, a machine known as Ella®, can reportedly determine the sex of incubating eggs in less than a second. Female eggs continue incubating the full 21-day period, while male eggs are removed from heat on day 9. The company’s tagline? “We care about the welfare of chicks.” They care enough to kill male chicks one-third of the way through incubation instead of at completion, which, in a world guided by lesser evils, is indeed a victory. Using in-ovo sexing quietly kills a creature who has only begun to resemble a chick, avoiding the status quo barbarism required to grind up cheeping, hopping individuals on day 21 or 22.

In-ovo sexing tech has been readily adopted into law by more progressive nations, with France and Germany outlawing the culling of day-old male chicks in 2021 and 2022, respectively. But such measures are far from the norm; the agriculture industry insists whenever potential legislation arises that it’s cheaper to cull millions of chicks than it is to sex them in-ovo. Switzerland banned grinding/maceration but still allows gassing, in compliance with a 2009 EU directive to kill male chicks under three days old “immediate[ly].” Were the choice theirs, European consumers would likely support widespread adoption of in-ovo sexing, as indicated by a recent survey. The European Commission found that 94% of civilian respondents supported a ban on one-day-old chick cullings while half of the businesses who responded opposed.

Still, progress is being made. It’s at least somewhat heartening that millions of people are bothered by the deaths of millions of chicks. Dr. Cinnamon himself is quoted as saying, “We are very happy to be able to provide a viable solution to… the most devastating animal welfare issue in the livestock industry worldwide.” While it’s nice to hear chick culling described as “devastating,” it seems a bit self-aggrandizing to suggest that his engineered chickens solved the most devastating animal welfare issue. The Volcani Center’s breakthrough makes for a humane egg industry only if you ignore the lives of the female chicks who live on. Martin Rücker of Foodwatch echoed this very sentiment, saying: “If only the cruel practice of killing chicks … is ended, this will change absolutely nothing about the unbearable suffering of laying hens.” If male chicks are egg farmers’ collateral damage, then the female chicks are the metaphorical intended target. They have the distinct misfortune of growing up.

Humans have lived with and made use of chickens for at least 3,000 years, but it was only in the past century that egg companies transitioned to the battery-cage model – and even then it was done for genuine welfare reasons: reducing parasites and pecking-related injuries. It was only after the fact that producers realized cages’ efficiency-enhancing perks, namely unitizing husbandry and saving on square-footage. Predictably, these cages inhibit natural behaviors and inspire a way of being totally unnatural to Gallus gallus. Hens housed in battery cages cannot dust-bathe, forage, socialize, or even walk; it’s no surprise pleasure behaviors (e.g., tail-wagging) are likewise absent. Like many other species raised for food, hens live their lives indoors in artificial light with artificial ventilation, but unlike their quadrupedal counterparts, hens live stacked high, a multi-tier wall of cages upon cages. Visibility is notoriously difficult, impeding any chance at welfare inspections, often leaving injured birds to die unnoticed.

In the face of stressful captive environments, animals tend to develop stereotypies – abnormal, repetitive actions that can resemble obsessive-compulsive disorder. Big cats in zoos have taken to pacing. Hens’ stereotypy of choice is feather-pecking. The industry response? Beak-trimming, also known as debeaking. Using either a hot blade or infrared light, week-old chicks have their beaks chopped by up to a centimeter. Predictably, beak-trimming causes the birds immense pain (as indicated by lethargy and guarding behaviors) and makes it difficult for them to eat. Not unlike an elephant’s trunk, beaks are how chickens normally interact with the world. Lopping off the front half of their beaks robs them of dexterity, forcing them to figure out a new way of interacting with their environment. Nature supplied them with a perfect tool, but thanks to human intervention, they have to devise a new way to eat.

This is to say nothing of other controversial practices, such as breeding hens with disastrous genetics or forcing birds to molt via starvation. The list goes on – and the list is self-supporting. That is, many of the egg industry’s welfare issues stem from other welfare issues. Popular laying hen breeds are predisposed to osteoporosis, for instance, so the industry’s response has been to prevent running and flying as much as possible via caging.

Poultry scientists themselves admit that “under certain management systems (e.g., exposure to high-intensity natural lighting) and with some genetic stocks, beak trimming is needed to prevent feather pecking and cannibalism.” They know that the genes are broken, and they know that the unnatural environment drives birds mad. They know that their own practices diminish laying hens’ welfare, but rather than course-correcting they double down on welfare infractions by trimming beaks and further limiting hen mobility. This is the fate that awaits the embryology team’s little Goldas. No male chicks will have to die, but the female chicks will still have to suffer.

The gargantuan scale of animal agriculture can leave consumers feeling like optimism is for the birds, but you can help by making simple choices in your own life. Eat deliberately. Eat conscientiously. Opt out of commercially-raised eggs; the majority of the world’s eggs are produced via industrialized systems that use low-welfare practices. This could mean avoiding egg-laden dishes, or you could simply substitute; an alternative ingredient usually exists. When catering group meals, consider serving plant-based by default. Avodah has adopted DefaultVeg strategies for all meetings & events, as has the Jewish Council on Urban Affairs. Plant-based defaults hold wide appeal, benefiting human health, planetary wellbeing, and animal welfare—a no-brainer for any community who strives to remain mindful of ethical consumption.

The Volcani Center’s engineering is truly an achievement. It took nearly a decade of commitment and ingenuity to produce a single-sex clutch. But a newsworthy feat does not erase the egg industry’s abysmal practices, which leave females to suffer in low-welfare conditions, and if a female egg revolution is indeed coming, we owe it to the 7 billion laying hens alive today to protect their daughters.

About the Author
Mikhala Kaseweter, MSc, is a self-professed bluestocking and friend to countless species. She currently advances right relationship through her work at the Better Food Foundation. A native Midwesterner, she is now a constituent of Bernie Sanders, residing in Vermont with one human and three felines.
Related Topics
Related Posts
Mikhala Kaseweter