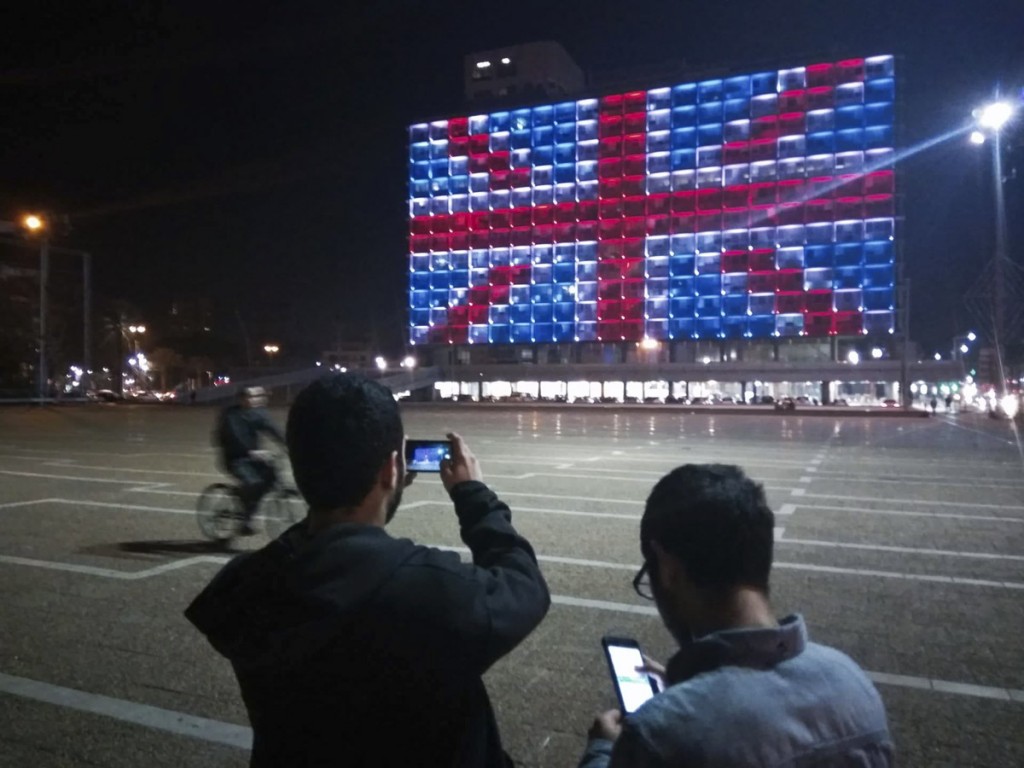 Night in Tel Aviv and the streets are empty. Every three seconds, the Union Jack and the Star of David replace one another on the boring wall of the municipality, as if in a computer slide show, throwing blue and red or blue and white light on the dark Rabin Square.

Holy Moses! Look how things work out! Once we (I love your “we,” newcomer, I love your total identification with your new homeland) — once we fought the British for our independence and now we (yes, this time it’s really “we”) send them our condolences. We are both victims of terrorism.

I recall an old man whom I met in Jaffa port years ago. Sitting in the back room of his small shop, he delved into his youthful memories. “Passing by British checkposts on my motorbike, a grenade in my right hand, my left holding the handlebar, I pulled the safety pin with my teeth and hurled the grenade at the soldiers! Oh, what naïve hot heads we were! We should have joined the Brits in our fight against the Arabs and then got rid of them too!” He looked straight into my eyes, drew a huge WWII revolver in a homemade holster from under the tabletop and said: “This is for Arabs. When they come to kill me.”

Another old man pops up from an adjoining cell in my memory — that very summer I met him on a pleasure boat near Windsor. He was with his grandson. “Where are you from?” he asked friendly.

“From Israel, once Palestine. A hot place, if you know what I mean.”

“Oh yes I do. In my youth, I served there. They were hotheads, those young Jews. But now I can understand them — they wanted a state of their own and you can do nothing about it.”

Night in Tel Aviv and a lonely TV journalist, with his camera on a tripod directed at the flickering municipality building, is looking for interviewees. In his heavily accented English, he asks whether I can say a few words to the camera, noting somewhat proudly that he works for an international news outlet.

“Sure I can, but I doubt whether this is what you expect to hear. Nowadays, terror can strike you anywhere, etc., which is true. I do share the pain of those who lost their dear ones in the Westminster terrorist attack. As a journalist/photographer, I know far too well what terror looks like. I’ve seen shreds of still-bleeding human flesh spread all over the place. I am against violence in any form. But here it is a bit more complicated. There is an occupation here and it is an additional cause — or at least a pretext — for terrorism. It’s in our interests to put an end to it as soon as possible. We have too much to lose — this wonderful country that we all love.”

“No, this is not for the camera,” replies the cameraman. “And let me tell you something. It is not complicated at all. It is very simple. Global Jihad is the name of the game. Once I thought exactly like you do. But not anymore.”

He is both angry and saddened that his countryman perceives crucial issues so wrongly.

“You know what,” I say quietly, “once I thought exactly like you do now. But not anymore.”