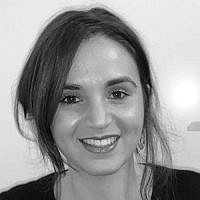 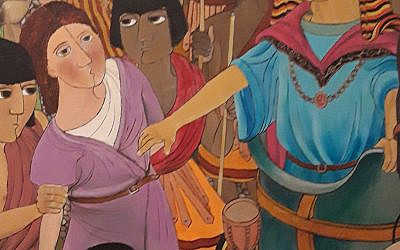 [Source: part of a painting by Michael Falk, private collection. All rights reserved. In the picture we see Benjamin who is ‘caught’ with the gold goblet]

In this week´s parashat Vayigash we see the tail-end of the story that unfolded in parashat Miketz. Miketz left us with a cliffhanger: Joseph’s plan to set up his brothers had reached a climax: Benjamin is framed for the theft of Joseph’s gold goblet. What was the meaning of Joseph’s test and the response of the 11 brothers? And finally: what can we learn from this episode?

Joseph’s test
When Joseph’s brothers come down to Egypt to purchase provisions, they have no idea that the man responsible for distributing food, the assistant, or viceroy of the king, is their brother. ‘Joseph recognized his brothers, but they did not recognize him’, Torah tells us [42:8].

And Joseph is not planning on giving his brothers an easy time. They are accused of espionage (“meraglim atem!” [42:9]). After the brothers reply that they are all brothers from one father and that their youngest brother, Benjamin, is at home, Joseph puts them to the test: the brothers are allowed to go back to Canaan, but one has to remain in prison in Egypt and stay as a ‘guarantee’. Only when the brothers come back with Benjamin, will the guarantee be released.

This is the ultimate test for the other ten: how will the brothers respond when the earlier situation presents itself again and one of them goes missing? Rabbi Hirsch points here to the special place Rachel (mother of Joseph and Benjamin), had in their father’s affection. How will the brothers react if they can gain their freedom at Benjamin’s expense? Will they be ready to sacrifice their freedom for Rachel’s other son, and perhaps their new father’s favourite?*

Torah tells us about the negotiations that take place between the brothers and their father about taking Benjamin with them to Egypt (see Ruben in [42:37]). It is only after Judah emphasizes the commonsensical necessity of the whole project (“Send the lad with me and let us arise and go, so we will live and not die, we as well as you as well as our children” [43:8]) and says he will personally guarantee for Benjamin’s safety, that their father consents with Benjamin going.

The art of approaching
Jacob’s worst nightmare is realized when Benjamin is falsely accused of theft and condemned to slavery by the viceroy. When this terrible fate befalls Benjamin, Judah keeps the promise he made to Jacob. Parashat Vayigash starts with the words ‘Vayigash elav Yehudah’ (Judah approached him, i.e.: Joseph). Approaching literally means ‘moving towards someone or something’. This requires courage: it’s easier and less confrontational not to approach. Judah places his life and his destiny in the hands of someone he doesn’t know. He has no guarantees for the future. His only guarantee, is himself, as a literal guarantee for his brother Benjamin.