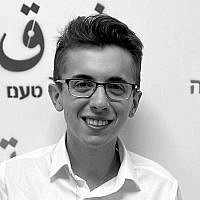 In a recent TV interview with “Meet The Press,” incoming MK Avi Maoz took aim at non-profits within Israel working towards shared Arab-Jewish society. He cited “radical progressive organizations working with the Ministry of Education, the IDF, and the police” as meddlers working towards Jewish “assimilation.” He even blamed The Abraham Initiatives, a non-profit that advocates for equality between Jewish and Arab-Israelis, for fomenting a weak police response to the civil unrest in mixed cities in May 2021.

Maoz, leader of the anti-feminist, anti-LGBTQ+ Noam Party, is set to become deputy minister as part of the incoming Netanyahu-led coalition in 2023. This coalition has raised concern from across the world for being the most far-right government in Israeli history, prompting doomsday op-eds and heated Shabbat dinner debates worldwide.

While it is easy to laugh off Maoz’s comments as illogical ramblings, his words have a serious implication on the reality of life for both Arab and Jewish citizens in Israel. After all, Maoz is not some fringe commentator on Israeli politics. He is a Member of Knesset set to control the content of Israeli school syllabi.

So, when a future architect of the Israeli education system says “I want to create an authority that will expand the Jewish identity of the state” on public television, we must acknowledge the gravity of these statements. These words threaten to unravel work done by non-profits and community organizations to advance shared society in Israel, and they reinforce the antiquated, racist idea of Arab-Israelis as second-class citizens.

Maoz’s comments in the interview indeed reflect a dangerous misunderstanding of what shared society organizations work towards. Rather than addressing issues of racial profiling among Israeli police or crime within Arab-Israelis communities, he instead slanders all shared society projects as alien leeches set to drain Israel of Jewish character. These claims have no basis.

In the interview, Maoz refers to an Abraham Initiatives project on policing created in the aftermath of the Second Intifada. In October 2000, Israeli police killed 13 Arab Israeli protesters after several days of demonstrations. The subsequent Or Commission revealed the use of excessive force and poor preparation on the part of the police force. For years afterwards, Arab citizens of Israel reported feeling unsure if the Israeli police viewed them as citizens deserving of protection, or if they were viewed as a foreign outsider to be protected from.

To address this strained relationship, the police approached the Abraham Initiatives for workshops on how to more sensitively address the cultural needs of the Arab-Israeli community. They organized tours to Northern Ireland with senior officers – another region of the world ravaged by prolonged, sectarian conflict – to learn about building post-conflict trust. The non-profit also cooperated with local Arab leaders in Israel to mitigate hostilities and rebuild community trust towards the police.

Maoz implies that the Abraham Initiatives manipulated a soft response to crime in mixed cities, when in fact, this could not be further from the case. Human Rights Watch extensively documented abusive practices towards Palestinian citizens of Israel in the wake of the 2021 Lod riots: a sign that perhaps these sensitivity initiatives had not been implemented far enough.

Likewise, unlike similar movements against police brutality in the United States, Arab-Israelis report under-policing in their communities, and they want more, effective policing, not less. To many Arab activists and leaders, the Israeli police have not sufficiently protected its own citizens from this year’s crime wave, in which over 100 Arab-Israelis had been killed in homicides.

To address the imbalance in police support, shared society organizations have also worked to address crime within Arab-Israeli communities. The “Safe Communities” initiative teaches self-defence classes to Bedouin women in the Negev: a savvy method to combat rising rates of domestic violence in the south of Israel. They also work to bring participants in Arab communities in contact with security authority rarely encountered in everyday life, such as the police and fire brigade.

To be clear, none of these initiatives encourage Israeli Jews to abandon their Judaism, nor do they glorify or incite violence against Jews or Israeli citizens. Instead, they focus on tangible solutions that prioritize the well-being of individual Israeli citizens affected by violence, whether that threat stems externally or from within their own communities.

Furthermore, to say that shared security initiatives somehow undermine the “Jewish character” of Israel misinterprets the goals of the Israeli state itself. In fact, contrary to Maoz’s statement, fostering a pluralistic, shared society that is safe for both Jews and Arabs has been the official aspiration of Israel from the country’s earliest years.

The 1948 Declaration of Independence says of the fledgling Jewish state: “it will ensure complete equality of social and political rights to all its inhabitants irrespective of religion, race or sex; it will guarantee freedom of religion, conscience, language, education and culture; it will safeguard the Holy Places of all religions; and it will be faithful to the principles of the Charter of the United Nations.”

To ensure complete equality with regards to religion or race, Israel must contend with the fact that Jews are not the only citizens of the Jewish state, nor are they the only ethnicity deserving of “safeguarding.”

Shared society organizations provide practical opportunities to strengthen the scope of security to encompass Israel’s Arab minority. Not only is improving the security of Arab-Israelis a strategy that would uplift everyone in Israeli society, but it is also a responsibility consistent with Israel’s founding goals to maintain equal social and political rights for all its citizens. Avi Maoz, in his furious and fear-mongering rant, forgets his own country’s founding principles.

In a modern, moral country, no ethnicity deserves better police protection than another. Every person in Israel deserves to feel safe and secure, not just the Jewish majority.

About the Author
Sam Shepherd (he/him) is a recent graduate of McGill University, where he studied history, literature, and Jewish Studies. He is currently volunteering in Lod as part of the Yahel Social Change Fellowship, in which he works as an English-language teacher and community volunteer. Sam is also an intern at the Abraham Initiatives for 2022-2023.
Related Topics
Related Posts
Sam Shepherd