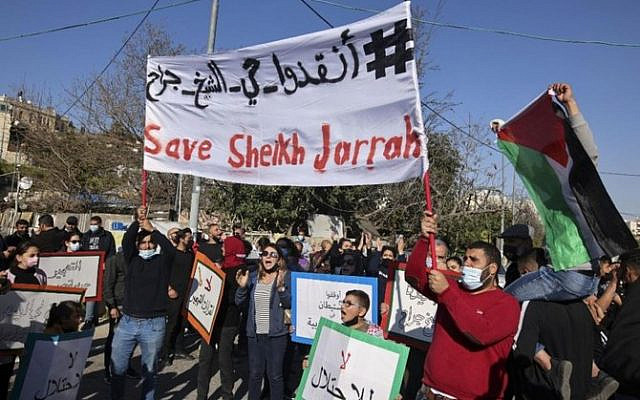 In May of this year, 2021, Hamas ignited another war against Israel. The war was ostensibly centered around Sheikh Jarrah, and that is what the enemies of Israel kept stating. That was a lie. Those who knew this had been speaking out about it from the beginning, like Palestinian activist Bassem Eid, but unfortunately his words fell on deaf ears.

After Israel’s war of independence in 1948, Jordan, in what was supposed to be an armistice illegally seized and occupied Judea, expelled the Jews who had purchased land there, and facilitated the moving in of Palestinian Arab families until Israel reclaimed Judea in a defensive war in 1967 where Arabs still live to this day. As Bassem Eid notes in his article:

“This had been a private matter between Jews who have an old property deed from the 1800s and the residents of four homes who have lived there for decades and do not want to pay rent.”

That was absolutely true as this article gives more context. It states:

“The four Sheikh Jarrah homes under discussion were built on land owned by Jews before the 1948 Israeli War of Independence, when they were seized by Jordan and leased to Palestinian families. After Israel captured the area in the 1967 Six Day War, a 1970 Israeli law transferred all abandoned properties still held by the Jordanian government, including the Sheikh Jarrah homes, to the custody of the Israeli government.”

But this war was not really about Sheikh Jarrah. We know this for certain because just recently, the Israeli High Court offered the four Palestinian families, plus seven others, a deal. The deal was that the land they were living on is legally Jewish land, but the Palestinian families were permitted to stay as “protected tenants,” which means that even though they have not paid a single month of rent in decades, they would not face eviction ever again.

Because of this pressure, the Palestinian families have rejected the High Court of Justice’s proposal.

How is it that the Palestinian Authority, a government that is supposed to represent the Palestinian people, directly go against the needs and wants of its own people? How is it that in a personal legal dispute between a few families and Jewish owners, the PA would have to meddle and force its people’s hand to do something they did not want to do? The answer should be very simple and obvious, but in case there is confusion, it is because Palestinian leaders, much like anti-Israel activists around the world, do not actually care about the people they claim to fight for. The Palestinians to them are merely two things; weapons to attack Jews with, and money makers.

This is evidenced by the fact that during the war in May, attacks on Jews worldwide spiked dramatically in places like the US, UK, Germany, and Canada. There were anti-Israel Protesters in the UK chanting “kill the Jews! Rape their daughters!” In Times Square, New York, a Jewish man was brutally beaten by a man named Waseem Awawdeh, who hurled anti-Jewish tropes like “dirty Jew,” and telling him “Hamas is going to kill you.” The assailant is also a man that world renowned model Bella Hadid boasted about protesting against Israel a few days earlier. She has yet to make a comment about him since the attacks.

Not all of the Jews who were attacked worldwide would identify themselves as Zionists. And even if every one of them did, there is no justifying the blatant Jew-hatred on full display in light of the war.

This is a challenge to every person who made noise about what they thought was a land dispute for which Israel was at fault; now that you see these events unfolding, will you call out the Palestinian leadership for being a stumbling block to peace? Will you use your platform to shine light on Mahmoud Abbas and his corrupt leadership, Bella Hadid? Will you speak up on behalf of the Palestinian families who are being forced out of a deal they want, Trevor Noah? Will you spend a large segment of your talk show to highlight the abuse these Palestinian families are enduring under their leadership, John Oliver? If you will not, you yourself are a stumbling block. You are part of the problem. You don’t care about Israelis, Arabs, or peace. And this isn’t just directed at the celebrities. Anyone, big platform or small, who used the war in May to falsely accuse Israel of stealing land, if you are silent now, your silence shows how fake and uninterested in peace you are.

Next time an issue surfaces in Israel and gets national attention, we may not know everything right away, but we should at least know to wait before speaking. We should at least be curious as to why the issue is getting national attention, and what is not getting attention at the same time. There are powerful forces whose primary focus it is to provide cover for Jew-hatred, and to defame and smear the Jewish state. Yes, even the sources you trust, and even the public figures you admire. They cannot be trusted. Be methodical. Weigh opposing views together. Seek the truth. And when you speak, speak the truth.

If you are unwilling to speak the truth, then be quiet. Let the truth tellers speak.