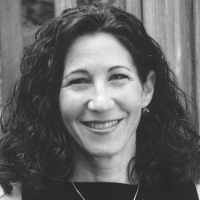 The Blogs
Susie Gelman
Apply for a Blog
Please note that the posts on The Blogs are contributed by third parties. The opinions, facts and any media content in them are presented solely by the authors, and neither The Times of Israel nor its partners assume any responsibility for them. Please contact us in case of abuse. In case of abuse,
Report this post.

On September 13, 1993, I was privileged to sit on the White House lawn and watch as President Bill Clinton brought together Israeli Prime Minister Yitzhak Rabin and PLO Chairman Yasser Arafat in an historic advance towards peace. That moment is among my fondest memories in my years of service to the American Jewish community.  Nearly three decades later, I remain a strong believer in a territorial compromise between Israelis and Palestinians, notwithstanding the unsuccessful efforts to date, as the only way to preserve Israel’s secure, Jewish, and democratic future while realizing Palestinian national aspirations.

Twenty-seven years after the signing of the Israeli-Palestinian Declaration of Principles, similar scenes are unfolding in rapid succession: first, two normalization treaties between Israel, the UAE, and Bahrain, collectively dubbed the Abraham Accords. Then, just last week, an announcement that Sudan too would begin a process of normalization with Israel. It is likely that more Arab states are waiting in the wings.

How this will all pan out remains to be seen, though they represent significant and positive achievements.

What is clear, however, is that despite Israel’s ostensibly suspending West Bank annexation in favor of normalization, the Trump-mediated accords leave the most intense disputes unresolved. The Israeli-Palestinian conflict’s existential implications for Israel have been virtually ignored. These cannot be papered over by treaties with far-flung Gulf monarchies or agreements with other distant Arab states.

Two likely, deeply concerning results are that the American Jewish community’s discord over Israel will intensify, and the cynical deployment of Israel as a political wedge issue will increase. Moreover, the gulf between American and Israeli Jews is widening. New polling shows that Israeli Jews prefer Trump to Biden in a proportion directly inverse to their American cousins’ largely Democratic leanings.

Disagreement about Israel is not new to American Jewry, but in recent years, the goalposts of the debate have shifted dramatically.

The political faultline defining American Jewish divisions over Israel in the 1990’s revolved around peace.  A pro-peace camp promoted reconciliation.  A smaller, more hawkish faction charged that proponents of peace were naïve, or worse.  But a bedrock commitment to Israel, Zionism, and the importance of the US-Israel partnership was not in question.

Today, however, peace is no longer the watchword. In the absence of a real political process between Israelis and Palestinians, “Jewish and democratic” has replaced peace as the central divide in American Jewry.  There are those who want Israel to continue on as a Jewish state at the expense of its democracy, and there are others who would see the country lose its Jewish character in order to remain democratic.

It does not have to be that way, as supporters of a two-state solution understand.  But “Jewish or democratic” may not be such a false binary if Israel proceeds with annexation of the West Bank.

Despite the best efforts of both the Trump administration and the Israeli government to frame the latest normalization deals as “peace agreements,” they simply have not animated American Jewry in the way that efforts to reach a final-status arrangement with the Palestinians did, nor do they carry the weight of treaties with Israel’s immediate neighbors and former enemies in numerous wars, Egypt and Jordan. Thus, normalization will not sway many Jewish voters when they cast their ballots in November. Indeed, the battle over Amy Coney Barrett’s ascent to the Supreme Court, the ever-increasing tolls from COVID-19, and, of course, the election itself, weigh far more heavily.

But those who closely scrutinize the normalization deals are likely aware that Prime Minister Benjamin Netanyahu has stressed the temporary nature of “suspending” annexation. Incoming Israeli Ambassador to the UN and the United States Gilad Erdan has reiterated that annexation remains very much on the table for Israel. Settler leaders have also openly called for continuing de facto annexation via intensified settlement construction and retroactive recognition of illegal outposts. Thus, the “Jewish or democratic” question will remain at the fore. If forced to choose, many American Jews will prioritize Israel’s remaining democratic, or they may simply become more apathetic towards Israel.

Israeli annexationists and Trump administration officials may already understand this. Perhaps their political calculus is that even absent American Jewish support for Israel, an expansionist policy could still mobilize the much larger evangelical community. While hardly monolithic, American evangelicals’ partisan leanings broadly represent the mirror opposite of US Jewry’s.

Trump sees matters in purely transactional terms and has expressed disappointment in American Jews who fail to reward his Middle East diplomacy with political loyalty, while explicitly stating that his policies toward Israel are “for the evangelicals.” The president has made nakedly political attempts to leverage the latest normalization efforts in his re-election campaign.

Many Americans who are not Jewish support Israel and the US-Israel relationship. But if American Jewish support for Israel becomes significantly fractured, US-Israel ties could lose their moral center, and hopes that support for Israel will once again become bipartisan will be dashed. American Jewish leaders and organizations have mobilized for decades in support of the Israeli-Palestinian peace process, an essential US national interest. We have lobbied for assistance in resettling refugees in Israel. We have pushed for aid to Israel, especially in times of crisis, and, in turn, Israel has been a steadfast friend and ally of the United States.

Today, supporters of the US-Israel relationship must decide what they want that alliance to look like. It could be a relationship like the one America shares with Israel’s new partners in the Persian Gulf: a largely tactical, military-to-military connection, marred by concerns over human rights and hostage to the partisan winds of the day.  Alternatively, it could be a relationship with real staying power, rooted in common values and common interests. This depends largely upon the path Israel takes with its Palestinian neighbors and America’s role in that choice. In this respect, the latest normalization deals between Israel and Arab states should be seen as a welcome development, but they should not distract from the core issues facing Israel’s future.