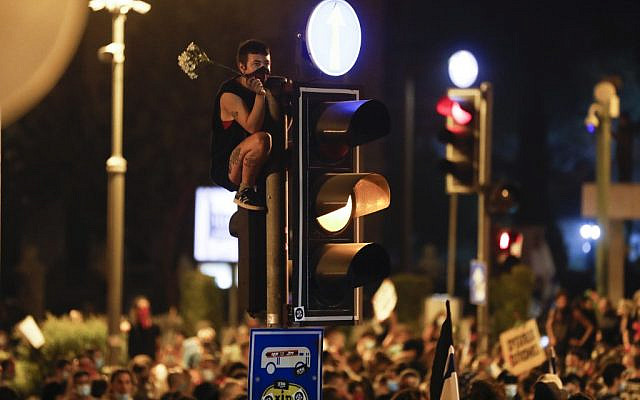 A protester holds flowers and sits on a traffic signal during a demonstration against the Prime Minister Benjamin Netanyahu, in Jerusalem, on July 23, 2020. (MENAHEM KAHANA / AFP)

Thoughts from another protest in Jerusalem last night: if the two protests represented two Israels, I know where I stand.

I really wanted to see it for myself, because from the media, it’s almost impossible to understand. I looked at five news sites and received five completely different pictures. And none of them matched the realities on the ground, which break down every easy dichotomy that our discourse is based on.

I walked by the “pro-Bibi” protest first. Several news sites seemed to suggest that it was a similar size to the “anti-Bibi” protest. That’s a bad joke. The latter was at least 10 times larger. In a cake walk. More than a “pro-Bibi,” what I saw was an “anti-anti Bibi” protest. In just a few minutes, I heard the word “Leftist” far more than I heard the word “Bibi.” As protesters from the other protests passed by on their way home, they were greeted with curses that they were “traitors” and an “embarrassment” and that they should leave the country.

There were reports of physical attacks that seem to be getting much less press than the one incident last week of a religious woman being attacked by supporters of the “black flags.” And there was hatred in the air.

I made my way to the “anti-” protest. The one that people always criticize by saying: you don’t stand for anything, you’re only against. It was definitely against. Against Netanyahu, against corruption, against apathy. But the feeling was not of hatred, and anger. It was a carnival. People were proud. Happy. Giving out flowers to police officers and saying thank you. Making heart symbols with their hands to people who were shouting against them. Singing. Meditating. For hours upon hours, thousands upon thousands of people with plenty of reasons to be angry and raging — and they are — took part in a loving, protest of peace…does that make them “leftists”?

On Left and Right

Many news sites have been reporting on the “protests of the left.” What does that word mean anymore? This protest had nothing to do with ideological disputes between left and right. (Recall that it is the leaders of Yamina who can now be heard saying that Netanyahu is not really “right”.) It wasn’t middle, either. It was yashar — straight, like the way Israelis give directions. “Yashar, yashar, and then ask.” It was a protest of all kinds of people — most “secular,” but many religious, most young, and many older — who all want yosher, a straight path, devoid of corruption, for leadership that works honestly for the good of the people. Once we get that back, we can ask and debate the classic questions of right and left, important questions that are utterly irrelevant to the protest, as they are irrelevant to the current crisis that Israel faces. “Yashar, yashar ad hasof.” The numbers at these protests are growing, and every violent dispersal by the police only increases their determination and their numbers.

On Violent and Non-Violent, and Religious and Secular

There was violence at the protest last night. As I walked by the pro-Bibi protest, I heard the “leftists” who were walking home from the other protest being cursed, and I could imagine how intimidated they might feel. There were reports of members of “La Familia” physically attacking the “leftists,” reports that seemed to be getting much less press attention than the one story from a previous protest of a visibly religious woman being spat upon by a group that looked like “Black Flag supporters.” As a visibly religious man, with a kippah, and tzitzit and an Israeli flag, I felt safe. No one would attack me. No one would suspect where my loyalties lie. Reverse discrimination. I felt safe, but I felt foreign.

At the “anti” protest, I felt much more at home. In truth, there were probably not very different numbers of religious protesters at the two camps. The difference was in the percentage. Again, reading news sites, it sounded like there were similar numbers at both protests. The reality was that, when I came towards the end of the protest, the “pro-Bibi” camp were probably less than a hundred, with a sizable percentage visibly religious, and the “anti-Bibi” camp numbered in the many, many thousands, with the visibly religious in the small minority.  But I have little doubt where the prophets would have found themselves. In the camp criticizing the “king” (this is literally what the pro-Bibi protesters called him, again and again), and standing up against corruption, and for justice that burns like a torch.

The protesters burned no torches this time, nor were they violent in any sense other than their very presence being defined as “violent.” The clearest proof of this is that the most offensive thing that right-leaning news sites that jump at any incident of violence of individuals in order to color the protest of thousands could find to report was another four women who understand that the best way to get coverage is to bare their chests.

There were no “clashes” between protesters and police. There were hundreds and hundreds of protesters, who had demonstrated without any violence, in song and dance and meditation for hours and hours, who, at 11 p.m., wanted to walk down the block to Independence Park to create a protest camp there. There had been conflicting reports as to whether the police would allow this. Ultimately, they did not. Instead, they announced to the protesters that their gathering was now illegal, and that they would be removed forcefully if they did not do so themselves. Protesters were forcibly removed with the flowers they had brought to distribute to police officers still in their hands. The very definition of civil disobedience.

They’ll be back. In greater numbers. Religious and secular. Young and old. Left and Right. Yashar, yashar, ad hasof.

About the Author
Avidan Freedman is an educator at the Hartman Boys High School in Jerusalem, and an activist against Israeli weapons sales to human rights violators. He lives in Efrat with his wife Devorah and their 5 children.
Related Topics
Related Posts
Comments 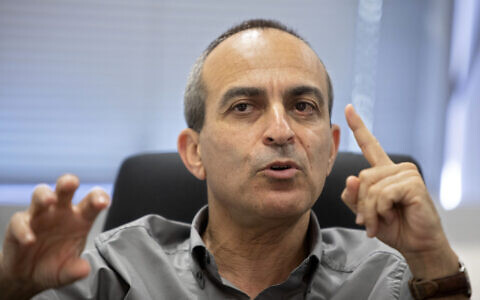 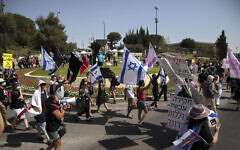 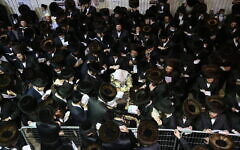 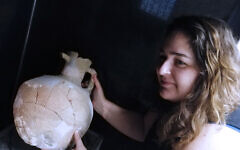 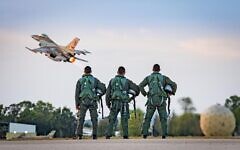