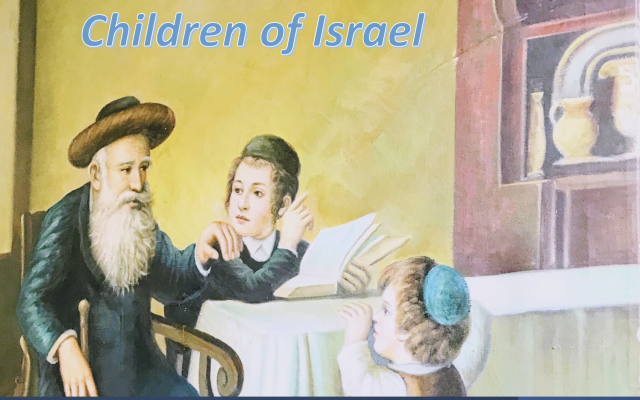 In stark contrast to another anti-Semitic terrorist attack at a synagogue last week, this time in Colleyville, Texas that could unfortunately have the consequences of scaring people off from attending synagogue in the future, I want to share something wonderful and loving that recently happened to me in synagogue.

While standing up for the Torah to be brought back to the ark, a little boy comes up to me and just gives me a big hug. I learned afterwards that the boy “makes the rounds” in shul giving everyone a beautiful Shabbat embrace. This simple symbolic act of caring and loving others, mainly many older people in synagogue, by this innocent child gave people an uncommon sense of happiness and even hope in our future despite the anti-Semitism and hate of too many others outside.

Afterwards, from seeing this child hugging everyone, I started to think about why we are called the “Children of Israel” and not just Israelites, Hebrews, or Jews–why specifically “children”?

Yes, we are descended from Abraham, Isaac, and Jacob (later called Israel), but that doesn’t answer why the moniker of children is important to who we are as a people.  Maybe some critically would say that because we are a stubborn people that have at times “rebelled” against G-d and His Torah, that we are like children and need to be brought back into line every so often. But I think the real answer is that G-d loves us as His children!

I remember in yeshiva when there was some crisis in the world, or especially in Israel, that we, as children, were told to pray, because:

G-d listens to the prayers of children.

In essence, we learned that a child is innocent and pure, and their prayers are unadulterated and go straight to the throne of the Almighty for His loving compassion on them and us. I remember especially the story of the little boy on Yom Kippur, who didn’t know how to pray, but instead he cried to G-d, and his tears had a direct impact on G-d’s mercy on the people for the New Year.

However, isn’t there an inherent contradiction here—even as we are always children in G-d’s eyes to be taught and loved, as we grow and mature, don’t we also have to act as responsible adults?

Thus, at bar/bat mitzvah (age 13 for boys and 12 for girls), we celebrate a rite of passage as we become Jewishly responsible for our actions. Further, we are expected to follow 613 commandments (taryag mitzvot), to live our lives ethically and with holiness, and to essentially make the world a better place (tikkun olam) not only for us, but also for our children and generations into the future.

Yet as every parent knows, being children and responsible adults is no contradiction in terms. For a parent, no matter how old or what stage of life their child is at, he/she is still going to be your child in terms of the love and guidance you give to them even long after they’ve had their fill listening to you. At the same time, as parents, we expect, hope, and pray that our children grow to be responsible adults and good people in their own right. For a Jewish parent that hope, and expectation is reflected in what we call nachas (unbridled gratification) that parents get seeing the good from their children and children’s children.

From the individual’s perspective, even as we grow older, we still all may feel like children inside; at least that’s how I know I feel. Our bodies age, but we are still in so many ways innocent and unknowing no matter how old we are—thus we make mistakes and fall down as children learning to walk for the first time. While perhaps, we get wiser with age, we still do many stupid things and for that we have to ask forgiveness from G-d and each other.

In the broader scope, I like something that Yossi Klein Halevi wrote in Letters to My Palestinian Neighbor about the Jews as children in a historical perspective; he writes:

I am not the son of destruction but of rebirth. We survived the Holocaust not as victims, but as victors. We have outlived the empires that tried to destroy us.

Albeit, at often a terrible price, we have been victorious, but how have we as the Children of Israel survived all these millennia, against all the odds, and seen anti-Semites and empires come and go, but we, as Jews, remain?

The answer is simple, the love of G-d is our secret for life and for our perseverance throughout history. G-d loves us as His children, but also punishes us as such. As children, we are always learning and growing, but as adults we have to act in a way of righteousness and holiness, so that we will merit the former, and not the latter. With G-d’s mercy and blessings, hopefully, we will have peace in our synagogues and our lives, wherever we reside in the world, to worship and live as Jewish people free of bigotry, hate, and terror, once and for all.