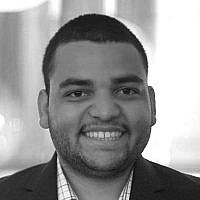 The Blogs
Rodrigo Ferreira
Apply for a Blog
Advertisement
Please note that the posts on The Blogs are contributed by third parties. The opinions, facts and any media content in them are presented solely by the authors, and neither The Times of Israel nor its partners assume any responsibility for them. Please contact us in case of abuse. In case of abuse,
Report this post. 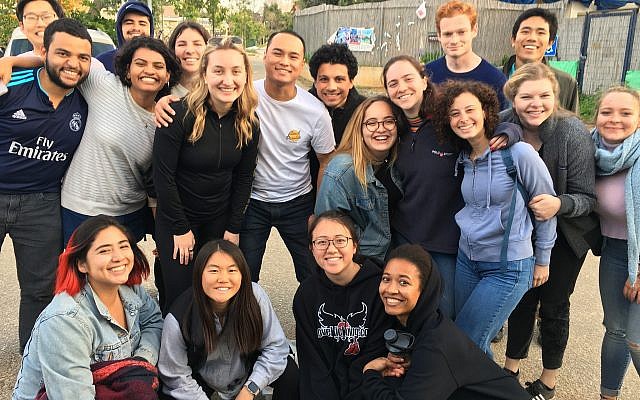 The meeting marked a very unique encounter between two groups of students who represent around 15 countries and come from a variety of backgrounds. Most of them are not Jewish, but chose to study in Israel because of their intellectual interests in the politics, cultures, and languages of Israel, Palestine, and the Middle East in general. Many of them have been learning Hebrew and Arabic during their time in Tel Aviv.

With the mission of making education a force for peace and sustainability in the Middle East, EMIS is an international boarding school high school that focuses mainly on diversity, conflict resolution, and innovation. The school is composed of approximately 20% Israelis, 20% Palestinians (from West Bank and Gaza), and 60% internationals. As a means of ensuring socioeconomic diversity, EMIS offers generous merit- and need-based scholarships, allowing for young leaders to have access to a rigorous and life-changing academic experience, through the International Baccalaureate (IB) Diploma Programme (2 years) or the Cambridge IGSCE (1 year).

During the visit to the Kfar Hayarok, NYU students met current EMIS students and had the chance to hear more about the school and their experiences as IB students there. The group of NYU students was able to share some insight about their experiences as college students, especially at NYU/NYUAD/NYUSH. EMISers were curious about what kind of opportunities NYU has to offer, and how they could apply there after they graduate from EMIS. 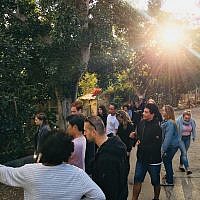 EMISers guiding NYU students through a tour at the Kfar Hayarok. 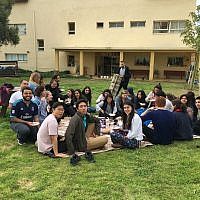 EMIS and NYU students having picnic/lunch together. 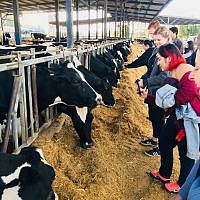 During the campus tour, NYU students were able to get to know more about EMIS and its mission. Melinda Cardenas, from the Gallatin School of Individualized Study (NYU Class of 2020), shared that she “was so impressed by the students, campus, and mission EMIS has.” For her, “the diversity of the student body along with the school’s push towards educating for peace and sustainability really creates a unique magical opportunity for learning that is rarely seen in high schools.”

However, the visit was not restricted to sharing information about the schools. Beatriz Oliveira (EMIS Class of 2020) “felt that this experience was more than just telling information about EMIS and hearing about NYU.” Besides that, she thinks that EMIS students “also had the opportunity to bring other topics to conversations, such as [their] countries and what [they] plan to do in the future.” She said that the visit was “very special,” because it allowed for EMIS students “to get to know, on a more personal level, an inspiring group of university students.”

As an EMIS alumnus (2016) and current NYUAD student (2020), I foresee relevant connections between EMIS and NYU Tel Aviv, as both institutions of learning focus on providing their students with opportunities to engage meaningfully with their personal and academic interests. Many students from both institutions chose to study in Tel Aviv due to their interests in topics that are important to the region, including conflict resolution, history, the environment, entrepreneurship, and innovation.

Israel, with its complexities, nuances, and contradictions, is an interesting place for students who are curious, open-minded, and willing to have an immersive and intellectually-stimulating experience. If you are interested in learning more about EMIS or NYU Tel Aviv, please do not hesitate to contact rsf309@nyu.edu.

About the Author
Rodrigo Ferreira is a Brazilian student majoring in Chemistry with minors in Applied Math and Arabic at New York University Abu Dhabi. His personal interests include materials science, peace studies, historiography, and writing pedagogy. Rodrigo is part of the first graduating class (2016) of the Eastern Mediterranean International (EMIS), an international boarding school that seeks to make education a force for peace and sustainability in the Middle East. Currently, he is spending a semester at NYU Tel Aviv.
Related Topics
Related Posts
Comments