As a Councillor involved in planning, a number of people in our community have asked me what action they should take to oppose the application for an Islamic Centre on the Hippodrome site, Golders Green.

Since Golders Green is not the area of Barnet I represent, I am at liberty to respond more freely than would otherwise be the case.

My advice has been as follows. You cannot object purely because you do not like the idea of an Islamic Centre or mosque, and I hope that is not how you feel.

Nor can you object because of the relatively small Moslem population in Golders Green. To do so would be wrong from the Jewish angle. We have to display the same respect for the religious needs of others as we expect for ourselves.

An objection on those grounds would anyway be invalid in planning law, it could be tantamount to a chillul Hashem, and be construed as racist or religiously discriminatory.

I explained that the only legitimate grounds for opposing the Centre would be environmental – namely traffic congestion, parking, noise disturbance and the like.

But if those alone were the genuine reasons for objecting then my advice would be to not to object at all.

Our own community has submitted numerous applications for schools, Shuls and social centres, where environmental objections have been a major issue.

Many of our projects have been successfully manoeuvred past unsympathetic planning officers and somewhat reluctant committees due to the determined efforts of various groups and individuals.

Jews actively campaigning against a mosque with similar objections would smack of double standards. It could also be shooting ourselves in the foot for future Jewish applications.

But I have to say – and this is the thrust of my article – that the concerns people expressed to me over this application were not just environmental, and certainly not race –based prejudice. 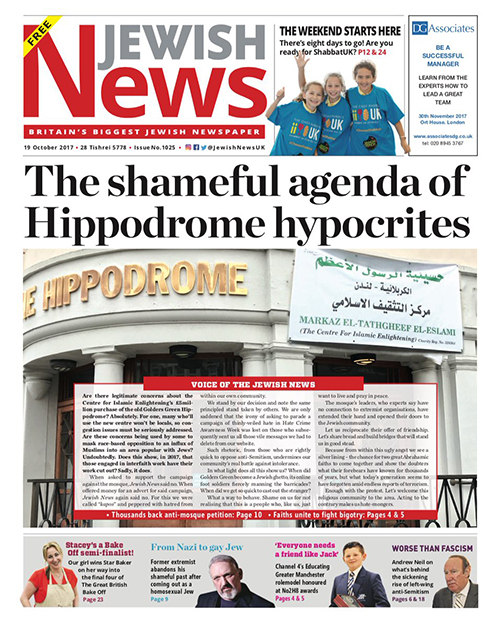 They were fears of potential extremism and violence. I therefore fundamentally disagree with the front page message of last week’s Jewish News, which condemned the objectors as a whole in the most vehement of language.

The fact is that this country , along with others, has suffered horrendous acts of terror , almost invariably committed by groups claiming to act in the name of Islam. Much of the hate-preaching that has inspired these atrocities is known to have emanated from places of worship, the most notorious being the establishment at Finsbury Park. It is not racist or Islamophobic to say so, how ever much the left-wing, “politically correct” lobby strives to intimidate the public into silence on this issue.

It could indeed be, as this newspaper suggested, that the intended Centre would be extremist – free, devoid of any anti-semitism, and a place of peace and friendship. I sincerely hope so. But based on recent experiences elsewhere , people are entitled to harbour doubts.

I have always been vocal on the Council in promoting good inter-faith relations and praising the multi-cultural nature of our Borough, and will continue to be. I am a long-standing Trustee of the Church-based Edgware Almshouses and I chaired a Working Group that produced a constructive report on combatting Hate Crime. I welcomed the establishment of the Islamic Community Centre in Edgware some years ago , in the face of considerable local opposition, both Jewish and non-Jewish. I trust my credentials speak for themselves

If I were a member of the planning committee deciding the Golders Green application I would feel obliged to support it , consistent with my deep belief in inter- religious tolerance. But tolerance is a two-way process. In a climate of unprecedented theologically-driven hostility towards Jews and Israel, members of our community are entitled to fear for their safety – even if they are nervous about expressing those true concerns in writing – without being condemned by some of their co-religionists as hypocrites and hate-mongers.