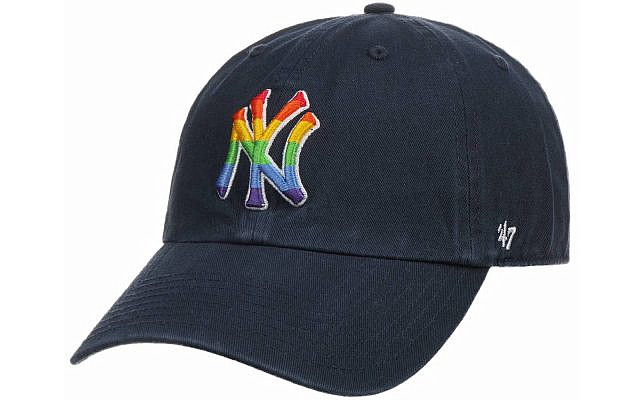 Sometime this past June, Lauren took Ilan, our 9-year-old, to a Yankees game. While there, she bought him a baseball cap of his choosing. In this case, it was a black hat with a rainbow Yankees logo, no doubt a part of their pride month merchandising. Ilan, like many kids his age, likes rainbows. Whether or not the inherent symbolism of the hat was a driving force behind his decision to choose it, I cannot say. It didn’t really matter, though, as he picked this specific hat as his favorite and happily put it on his head.

I hadn’t actually known about the hat until a few weeks later when I first saw Ilan wearing it in camp. I noticed it right away, made a mental note, and kept my mouth shut. It actually meant a lot to me that he was wearing it, but I didn’t think it was wise to bring it up. From his point of view, it was pretty safe to say that he was wearing a cap that he liked and that was all.

During the first Shabbat in camp, I happened to have seen Ilan walking by (OK, fine, I rarely “happen to see” my kids in camp; I lurk and skulk until they notice me and feel obligated to come say hello). He was wearing his hat. He also looked annoyed, so I took the entry point to ask him what was up.

“Some kids are making fun of me,” he explained. They were asking him why he was wearing a gay hat, or if he even knew that it was a gay hat. A teenage staff member may have asked him a similar question. I couldn’t know if these questions were benign or aggressive, nor did it occur to me to ask Ilan to clarify the tone in which the comments were made.

When he shared his upset with me, I rushed into survival mode: protect, protect, protect. I had no wisdom to share, no multiple points of view to consider. My child was hurt, and I wanted to find a way to shield him from it. While he may not necessarily have seen the panic in my eyes, he definitely heard it in my voice: “Well, buddy, you have lots of great baseball caps. Maybe don’t wear this one.”

He considered my advice for less than a beat before dismissing it as absurd. He likes this hat. Why shouldn’t he wear it if he wants to? Adequately admonished, I regrouped and offered him some language that he could use if anyone made comments that he didn’t like or appreciate. He could say, my abba and mommy don’t let me use the word “gay” that way. I can’t recall if I also offered or just imagined offering a less elegant approach: just tell them to shut up and go away.

Either way, Ilan seemed unimpressed by my suggestions, so he gave me a kiss (kind of a patronizing one) and walked back to the kids in his bunk. He looked fine. I wasn’t. I didn’t like anything about the exchange, most notably, my response. I understood, and so did Ilan, how inadequate it was, and even though I could justify the approach, the whole thing was pretty unsatisfying and vapid.

When I saw Ilan wearing the hat the next day, I felt even more reprimanded by his bravery and strength. There was no act of activism here. He had no soapbox to climb or flag to wave. He liked the hat, so he would wear the hat. He didn’t feel good being made fun of or being the subject of other kids’ questions, but somehow, the thought of not wearing it in order to shield himself from those comments was worse. In this way, my son taught me an incredible lesson about my parenting and myself.

In the face of a perceived threat, it’s no surprise that my knee-jerk reaction would be to protect. After all, isn’t that what we do? Of late, it seems that parents have moved away from helicoptering and have morphed into full-blown bulldozing, clearing the path of obstacles in their children’s way. The notion is admirable until we realize how detrimental the approach is for our children’s abilities to recognize the differences between being unsafe and being uncomfortable. While the former may require intervention, the latter, most often, does not.

Our kids are amazing and resilient. They can do hard things. So can we.

A few days later, I saw Ilan again, this time wearing a green, camouflage hat. Crestfallen, I jumped right into conclusions: he was tired of people commenting about the rainbow hat. He’s wearing camouflage because he doesn’t want to be noticed; he just wants to blend into the landscape. I kept piling brilliant theory on top of brilliant theory, but I was resolved not to ask him about it.

I asked him about it (like a house of cards in a storm). “I noticed,” I meandered towards him with the subtlety of thunder, “that you aren’t wearing your rainbow Yankees hat today.”

“Yeah, I changed it because sometimes I like to wear other things. I noticed,” he rejoined, “that you’re not wearing the same shirt you wore yesterday.” Touché.

Then, with a contemplative look, he asked me, “Does pride mean gay?”

“No,” I explained, “Pride means that you feel deeply happy and satisfied with an achievement. It means feeling worthy of that joy. It’s what I feel about you.”

He seemed satisfied with the answer, gave me a kiss, this one was less patronizing, and ran off to join his friends wherever in camp they may have been.