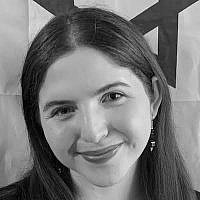 The Blogs
Rachel L. Suggs
Decker, Pex, Ofir & Co.
Apply for a Blog
Advertisement
Please note that the posts on The Blogs are contributed by third parties. The opinions, facts and any media content in them are presented solely by the authors, and neither The Times of Israel nor its partners assume any responsibility for them. Please contact us in case of abuse. In case of abuse,
Report this post. 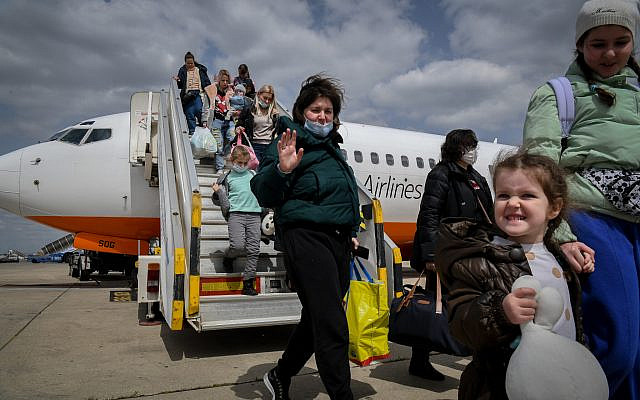 Illustrative: Ukrainians who fled the fighting in Ukraine land at Ben Gurion Airport outside Tel Aviv on March 17, 2022. (Yossi Zeliger/Flash90)

Cable cars are packed with women and children; fathers stay behind to fight. The war in Europe leaves the world speechless as it creates one of the worst refugee crises since World War II.

Ukrainian refugees need a safe haven until the emergency resolves. Israel has provided significant relief services abroad to all Ukrainians, as well as expedited citizenship to Jewish refugees. But the aid can not end there. Israel must provide safety for all Ukrainian refugees who manage to travel far enough to enter its borders, regardless of Jewish status.

Israel has taken in approximately 28,000 Ukrainian refugees since the war began, 4,500 of whom have left, with 350 being denied entry. The Ministry of Interior’s immigration authority published a policy in which they categorize these refugees into three groups: those eligible for Israeli Citizenship under the Right of Return, those ineligible for citizenship but who have first degree relatives in Israel, and those with no special ties to Israel whatsoever. There were also approximately 20,000 Ukrainians living in Israel when the war began, who the state announced would not face eviction, even if their visas have expired.

The Right of Return states that anyone with a Jewish grandparent is eligible for Israeli citizenship. Under this law, approximately 4,000 Ukrainian refugees in Israel are eligible for citizenship. Recognizing the extreme circumstance, Israel has drastically expedited its normally long and tedious immigration process for Ukrainian Jews, heroically providing a new home for victims of the invasion.

For those ineligible for citizenship, Israel’s Minister of Interior Ayelet Shaked announced on March 8 that Israel institute a maximum quota of 5,000 non-Jewish refugees with no Israeli relatives, which was rightfully but controversially overturned by the Israeli Supreme Court on July 3. This quota must remain overruled, as it is not only cruel, but stands in direct contradiction to the most important Jewish values.

Being a Light Unto the Nations

The Jewish people are meant to be a “light unto the nations.” In fact, the Hebrew word for Jew, Yehudi, is only one letter away from G-d’s name: the dalet, with a gematria value of four, is the only difference. This is meant to signify that the role of a Jew is to spread the Torah’s values to all four corners of the world.

Israel has completed many notable relief efforts in accordance with this goal. As a young nation, Israel stood by the Jewish value of hospitality and signed the United Nations 1951 Refugee Convention, which recognized the innate responsibility of an established state to welcome those fleeing unlivable conditions in their home country. Israel has also sent soldiers to provide aid in catastrophes worldwide, such as the 2021 Surfside building collapse in Florida, USA where soldiers helped rescue victims from the rubble. Thus, the problem with accepting non-Jewish refugees is not that Israel does not desire to be hospitable; the problem is that it is not merely a good deed done abroad, but rather creates a permanent change on Israeli soil.

The principal voice of the push to reinstate the quota is the concern that accepting an unlimited number of non-Jewish refugees would threaten the Jewish character of Israel by altering the demographic of the Jewish to non-Jewish ratio. The concern to protect Israel’s Jewish majority is understandable and necessary; however, the number of refugees with no ties to Israel who want to gain citizenship is not enough to alter the numbers in a meaningful way, as non-Jewish refugees are far more likely to resettle in countries closer to Ukraine.

Ironically, the closed border mentality threatens the Jewish character of Israel by ignoring the Jewish value of welcoming those in danger and failing to consider the bigger picture. Israel itself is already a melting pot of immigrants from all over the world, especially an abundance of immigrants from Eastern Europe, and even Ukraine itself. The solidarity felt by the Jewish refugees already here would extend to those who share the brunt of oppression in their home countries. With many Ukrainians already speaking Russian, one of the most common languages spoken by recent immigrants, their presence will only contribute to the multitude of Jewish cultures that Israel is fortunate enough to foster. While Israel is right to consider the changing demographics of its state, it must also consider the nature of this influx of vulnerable people.

Pirkei Avot Chapter Two Mishna Five commands the Jews to “not judge your fellow until you are in his place.” The Jewish people have been in the Ukrainian refugees’ place, a place of statelessness, following pogroms all throughout history and the devastating effects of the Holocaust. It is written in Leviticus 19:18 that “Thou shalt love thy neighbor as thyself.” The non-Jewish Ukrainian refugees in Israel waiting for citizenship are neighbors, and Israel must treat them the way the Jewish people were desperate to be treated during the thousands of years before Jewish statehood: welcoming them with open arms. And, of course, the famous tenet Tikkun Olam obligates efforts to repair the world; not just efforts to repair the Jewish world.

The above excerpts were written by some of the biggest Rabbis in the Jewish world or articled by G-d to Moshe himself, and obligate providing hospitality for the vulnerable. The Jewish state cannot overlook foundational Jewish principles for the sake of population and demographic composition. The population of the Jewish people in Israel does not single handedly make the state’s Jewish character: the adherence of this population to Jewish principles, values, and ethics is what constitutes the Jewish character. It is imperative that the quota for non-Jewish Ukrainian refugees remains overruled, and Israel welcomes all Ukrainians fleeing unlivable conditions with open arms.

About the Author
Rachel L. Suggs is a student at the University of Chicago pursuing dual bachelors degrees in Law, Letters, and Society and Middle Eastern Languages and Civilizations. She an intern at the law firm Decker, Pex, Ofir & Co. in Jerusalem, Israel, which specializes in immigration law.
Related Topics
Related Posts