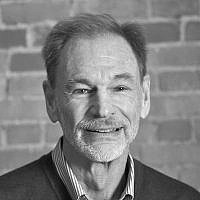 The Blogs
Jonathan Silin
Apply for a Blog
Advertisement
Please note that the posts on The Blogs are contributed by third parties. The opinions, facts and any media content in them are presented solely by the authors, and neither The Times of Israel nor its partners assume any responsibility for them. Please contact us in case of abuse. In case of abuse,
Report this post.

Since becoming a regular at a small progressive synagogue on Eastern Long Island, I’ve learned that the month of Elul is dedicated to preparing for the holidays ahead. This year the preparations feel more fraught than usual. Not because I worry about the Yom Kippur fast. In middle old age I leave more rigorous ritual practices to younger generations. Nor do I worry about how my supportive, non-Jewish partner and I will ford the steady stream of holiday events. Over the years we’ve arrived at a comfortable rhythm for his shul going and mine. Simply put, its contemplating long hours in shul that give me cause for agita. I want to respect the hard work of our Rabbi and the community in creating a safe physical and emotional space for the services. But how to pay attention hour after hour, day after day, and to what?

For the last two years, zooming into services from home, surrounded by the familiar objects of daily life, to say nothing of the demands of my endearing eighteen year-old cat who doesn’t quite get the need to guard the sanctity of the Yamim Noraim, I was easily distracted. I often kept my eyes shut tight for long periods in order to allow my mind to wander untethered from the things of this world. In the end, however, I experienced few periods of undistracted spiritual immersion.

I tell myself that paying attention, whether on line or in a synagogue, is not a competitive sport in which our performance is measured, quantified and ultimately judged by ourselves or others. But what exactly does paying attention require of us, and to what should we attend during these Yamim Noraim?

Asking these questions, I find myself returned to my 1950s education at the Society for the Advancement of Judaism, a Reconstructionist synagogue on the Upper Westside of Manhattan. I vividly recall our teacher, a middle-aged sabra often at a loss with how to reach a classroom of privileged, middle class American children, explaining with inordinate intensity that lasim lev, to pay attention in Hebrew, literally means “to set your heart upon it.”

Perhaps, because we were so often out of control and regretfully quite rude, Luba was trying to appeal to us in a fresh way. Her instruction that afternoon was direct, if over our heads: attention is an emotional disposition, a focus that emanates from within us, a whole-hearted turning toward the world that can not be imposed from the outside. I remember little of substance from my early religious education but the story of lesim lev remained — to be awakened now as I anticipate staying focused during the days to come.

In part, no doubt, Luba’s explanation stayed with me, when so much else did not, because I absorbed her passion and pride for the Hebrew language, only recently reconstructed as part of the project of creating a modern homeland for Jews in flight from antisemitism around the world. In part too it stayed with me because this was my first indication that everyday language could be figurative as well as literal, filled with poetry as well as prose. As a ten-year-old I wasn’t thinking conceptually, yet these words captured my imagination, an unintended consequence of the Hebrew school experience for which I am truly grateful.

I am down with the reflection part of the New Year project, but the traditional way forward — asking for G-d’s mercy and making promises to do better — does not resonate with me. Rather, this year I am hearing the shofar more as an invitation to change than a request for forgiveness of past failings. My spirituality remains bound up with my resolutely psychological attunement, and for me, the benefit of reflection lies in attending to personal experiences of change as the most reasonable route to living more Jewishly.

In On Wanting to Change, the psychoanalyst and Freud scholar Adam Phillips distinguishes between change as conversion and change as a slow process that works through tiny movements which we may not even recognize in the moment. Although Phillips says that Freud identifies the primal scene of conversion as the moment in childhood when we transform our own frightening sexual impulses toward our parents into symptoms, he’s deeply suspicious of radical changes in adulthood which involve our desire for certainty in world that is characterized by ambiguity and complexity.

In childhood, the first conversion is made in the interests of adaptation, the unbearable rendered tolerable through discomforting but manageable symptoms. Whether in personal or political/ideological realms, conversions are based in simplifying denials, a turning away from a world that demands we attend to fine grain distinctions and painful realities and toward a false sense of security that belies our need for an interrogative posture towards our existence.

Reading Phillips, I recall the lessons gleaned from a life time of therapy with many therapists, some skilled and kind, others profoundly misguided. The former accepted who I was even while saying things that I found difficult and unsettling, while the latter group didn’t seem to be rooting for me, especially the part of me whose love for other men was a bedrock way of being in the world. Over time I realized that therapy takes place in the complicated space between our fears of what can’t be changed and our anxieties that everything about ourselves can be transformed through malign influence.

Six decades later, I acknowledge my lingering resentment toward the therapists who asked me to radically change my sexual orientation. They warned about the short-lived nature of gay relationships. In 1962 my first therapist opined that same-sex relationships lasted several weeks, maybe months, as best two years. Where did he get this information? Ten years later another, my third or fourth therapist (who’s counting?), kept prodding me to give heterosexuality a chance.  Did he offer the reverse advice to unhappy heterosexuals?

These days I find the desire for change, the promise of therapy, not only in the consulting room but also in Friday night Kabbalat Shabbat services. Praying the Ana, B’khoah meditation we ask G-d to “undo the knot that ties us up.” Preparing for Shabbat, we seek a more expansive, open attitude, a relief from the mundane experiences that constrict and inhibit us. I don’t know if anything changes as a result of repeating this prayer, but I suspect that if it does, like the best of therapy, the shifts occur in small incremental and unfathomable ways. It’s true that I can be overtaken by a sudden rush of big emotions in synagogue,  just as some therapy sessions are marked by startling insights. I never know if the feelings have a lasting impact after I leave the sanctuary, nor am I certain which of the revelations during the therapy hour lead to real changes, and which are left wafting in the air of the therapist’s office. In both places,  however, I invest in the long term process and try to let the immediate events do their work unhindered as they pass through me.

As the Yamim Noraim approach and I teether back and forth between my experiences of change in secular and Jewish life, I am struck by two paradoxes that both worlds evoke. First, a prerequisite of going forward is going back. The work of Teshuvah, repentance and return, is about more than thumping our chests, confessing our sins, and asking forgiveness. More capaciously understood, Teshuvah is about repairing rents in the spiritual fabrics of our lives that may have occurred during the year. We seek healing and return to the religious and ethical practices that fulfill our commitments as contemporary Jews. If sin, chata, is about missing the mark, then Teshuvah is about recalibrating our aim by going back to what is essential and sustaining.

Although contemporary therapy is far more oriented toward the present and relationality than traditional analysis, here too we often find our way forward when we first go back in time in order to rewrite old scripts that no longer work for us. We can not change the facts of the past, but we can complicate the stories, retelling them to unlock new ways of being in the world free from self-defeating repetitions.

In addition to looking back in order to move forward, secular and spiritual renewal share a second paradox: they both invite a confidence that permits doubt, a self-assurance that fosters a secure and questioning posture toward our experiences. The Jewish tradition encourages us to engage in authentic dialogue with G-d. Our early leaders including Moses argued with G-d, and their ultimate strength often rested in their questions and doubts, rather than in certainties and blind faith. Today I am also thinking of courageous contemporaries like Auschwitz survivor Tova Friedman who, when she confesses her own sins, also tries to imagine forgiving G-d the horrors of this world. (https://legacy.npr.org/2022/09/03/1120917838/survivor-tova-friedmans-new-memoir-reflects-on-life-as-the-daughter-of-auschwitz). Believing in ourselves, we can believe in others, and that belief is best expressed through open, honest dialogue.

Therapy worked for me in something of a similar manner. In the depths of depression I could not ask good questions about the past. As long as I held tightly to old patterns of behavior, I was stuck and I could not move forward. The more confidence I gained in myself,  the better able I was to interrogate the past and reformulate my approach to the present. Along with this belief in myself came an increasing acceptance of uncertainty and a willingness to engage in small experiments to shift how I related to myself and others.

Lesim lev: this year in synagogue as well I will be turning my attention to embracing epistemological humility, to appreciating all that it’s impossible to know, and the little, tentative yet significant ways in which change may occur. When the daily news is filled with stories of rising right-wing rhetoric framed in big, bogus certainties, real threats of violence, and blind conversions to authoritarian leaders, an interrogative posture toward spiritual and practical matters can feel inadequate. But I am confident that if I keep my heart on the task of return and my ears attuned to the call of the shofar, then I will leave with strengthened resolve to take better care of myself and the world around me.

About the Author
Jonathan Silin is a Fellow at the Centre for Sexual Diversity Studies, University of Toronto. Formerly a member of the Bank Street College Graduate Faculty, he is the author/editor of 4 books including his most recent, Early Childhood, Aging and the Life Cycle: Mapping Common Ground. His occasional essays have appeared in the NYTimes, Tablet and the Chronicle of Higher Eduations.
Related Topics
Related Posts