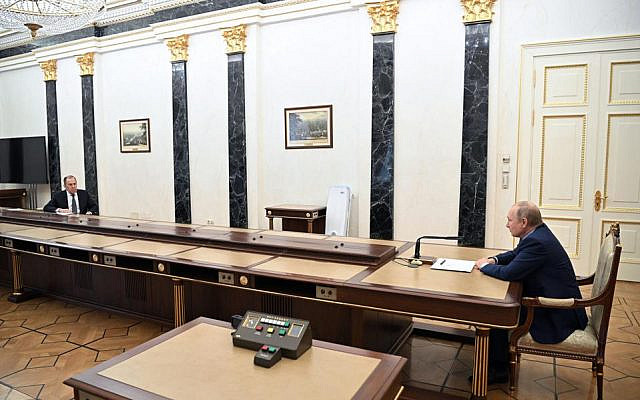 When Purim arrives on Wednesday, undoubtedly there is one purported villain who will receive the lion’s share of attention, and it won’t be Haman. Sure, we always talk about Haman, as we stomp out his name. But the character that we will not stop talking about is the one who we are not talking about. That of course is Bruno, from Disney’s new hit film, Encanto.

Face it, Bruno, you’re going to be talked about a lot when your song has become one of the highest charting Disney songs of all-time,  especially when the song fits so neatly into a ready-made Purim parody song. When “We Don’t Talk About Bruno,” hit it big, every rabbi this side of Shushan started to rewrite the lyrics, replacing “Bruno” with “Haman.” My personal favorite was produced by Temple Emanuel of Beverly Hills.

But there’s another villain whose name keeps cropping up, whose very name is just a Wordle away from Purim.  It would make sense that there would be lots of talk about Vladimir Putin this week, and his battle against the pesky Jew wearing the the royal robe who thwarts him at every turn.  There will undoubtedly be some Putin masks out there, and spiels featuring this lonely pariah sitting behind a very, very long table. There’s plenty to spoof when it comes to Putin.

But is that what we should be doing while the missiles are still falling? Should we be pillorying Putin this Purim?

The answer comes down to how we reply to three questions:

1) Does Putin pass the villainy test? Let’s see…invade a neighboring country, causing the needless deaths of thousands? Bombs hospitals? Poison gas…Threatens Nukes…Murders innocent children? Eliminates free press and free speech? Sends his economy back to the stone age.  I think we can safely say it, emphatically and without hesitation. Putin is evil.

We can say it. But should we sing it? Should our mockery ring from the rafters?

2) Does Putin have any redeemable human qualities? Or is he more complicated? Vlad has become such a cartoonish villain, the quintessential “Wicked, Wicked Man” of that old English drinking song turned politically incorrect Purim parody.  But is there an Elphaba from “Wicked” waiting to burst forth from his de-greenified skin?  I once asked whether Haman was just misunderstood; we might ask the same of Putin.  Was he mocked in gym class because of his height?  Did someone question his sexual orientation?  And if so, should that matter? Doesn’t Jewish tradition teaches us that no human being is either totally evil or completely good?

It is said that we should drink on Purim until we can’t tell the difference between cursing Haman and blessing Mordechai. Such moral ambiguity has a home in Judaism, which revels in the hidden complexities of life.  And the two protagonists of this story have nearly identical first names: Vladimir and Volodymyr.  But even a full bottle of Vodka could not blur the chasm of conscience that differentiates the moral cores of Putin and Zelensky.

Putin may have been redeemable at one point, like, say, kindergarten — but no more. After what we’ve seen these past few weeks, I can imagine that the inevitable “Would you kill baby Putin?” debates will pop up in the near future.

A few years — and crimes against humanity — ago, the Moscow Times listed what they considered to be 10 good things about Putin’s Russia. They didn’t say “about Putin,” because presumably no one could come up with anything good to say about the man himself. But some good things have happened on his watch.

And finally, one more factor to determine whether we can parody Putin this Purim:

3) Has his evil plot been defeated? Sadly we are not there yet, though that is not in itself a disqualifier. Purim brought hope to many during the darkest times of the Holocaust, even in the camps, when no one knew how things would end and no miracle was in the offing.  Yad Vashem’s website features some remarkable items,  including a Scroll of Esther used in Terezin, and a photo of Hanna Szenes in a Purim costume in 1939.  Holocaust survivors in the Landsberg DP camp in Germany made a mock-tombstone for Haman and Hitler just after the war. Some Jews even wrote a special scroll, like the Scroll of Esther, to celebrate the demise of the Nazis.

On the merits, Vladimir Putin absolutely qualifies as a bona fide Haman for our times — and for all time. But for this Purim, I’d stay away from Vlad. It’s OK to mock a cartoonish villain who sits behind a 20-foot long table, but not while people are still suffering from his evil decrees. Until this war is won, and God willing it will be soon, there is nothing to celebrate.  But once it’s over, we will be ready to stage the Best. Purim. Ever!