The Blogs
Jeffrey Kobrin
Looking to the Parasha to Inspire Our Parenting
Apply for a Blog
Advertisement
Please note that the posts on The Blogs are contributed by third parties. The opinions, facts and any media content in them are presented solely by the authors, and neither The Times of Israel nor its partners assume any responsibility for them. Please contact us in case of abuse. In case of abuse,
Report this post. 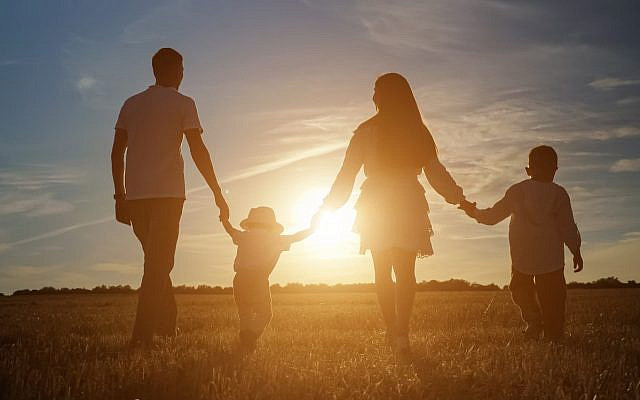 Illustrative. A family of four walks hand-in-hand in a sunlit field. (iStock)

True confession of a literary nerd: until 10th grade, I hated poetry. As an elementary schooler we read (and then wrote) things like haikus and sonnets. I thought they were stupid to write and even dumber to read. Why try to come up with imagery or rhymes when you can tell a story instead? It took maturity (and a gifted teacher) to turn me around. The irony, though, is that I had long loved song lyrics, which are also essentially poetry. My brain still uses up valuable storage space for years of top forty hit lyrics like these.

But Bible scholar Dr. James Kugel, in his Great Poems of the Bible: A Reader’s Companion with New Translations, points out that all poetry has a “vitality and directness that prose often lacks.” When we read a poem — like this week’s Torah portion of Ha’azinu — there’s an immediacy to the language that a set of laws or even a story does not have. The Torah tells us that Moshe and Yehoshua recited this shirah, this poem or song, be-oznei ha-am, “in the ears of the people.” Nineteenth-century exegete Rabbi Naftali Tzvi Yehudah Berlin, in his Ha’emek Davar, explains that this implies havanah be-amkut, a “deep understanding” of important ideas.

Why use a song? Why not just tell the people — as Moshe had been doing since the start of the book of Devarim (Deuteronomy) — to keep the mitzvot or they would be punished? Why the poetry? Professor Kugel strengthens the question, noting that biblical Israelites had no terms corresponding to “poetry” and “prose” — “There is no indication that they thought of their sacred writings as falling under one of these two headings.” So, why a song?

Possibly because a song, a poem, needs explication. It needs work to unpack; it needs someone to explain it in one’s ears like Moshe and Yehoshua did for the people. In a recent Wall Street Journal article, “The Year of the Voice Message: A Modern Guide to Phone Etiquette,” Magdalene Taylor writes of people who find voice notes annoying. One “doesn’t like how time-consuming it is to listen to them — without a universal decorum for the voice message… people send meandering messages, when a scannable text would do.” Perhaps the poetry of the Bible reminds us that sometimes important messages cannot be rushed.

Shabbat is wonderful, but sometimes it can feel like a voice note: we have conversations, but they can feel incomplete or rushed. Sukkot, on the other hand, is a time after the intensity of the Yamim Noraim when we can actually slow down and smell the etrogim, as it were. We have quality time with family and friends, time to read, to talk, to make plans for the year ahead, and to think deeply, rather than hurriedly. We can help our kids who are off during the holiday to find meaningful uses of their time. We can connect in ways that feel more real. Sometimes, slowing down is the only way to go faster.

About the Author
Jeffrey Kobrin is the Rosh HaYeshiva/Head of School at the North Shore Hebrew Academy in Great Neck, New York. He has bachelors and masters degrees in English literature from Columbia University, semikha from RIETS at Yeshiva University, and a PhD in English education from Columbia University’s Teachers College. He lives in Riverdale, New York, with his wife, Michelle Greenberg-Kobrin, and their daughters.
Related Topics
Related Posts