On Sunday morning, October 18th, I went to church.

I know, a bit unusual for a rabbi to attend church services on a Sunday. But since my wife Judy and I were visiting my youngest son Ari, who relocated to Charleston, South Carolina, I was drawn to join the worship services at The Emanuel African Methodist Episcopal Church, often referred to as Mother Emanuel. It is the same church where, four months ago, we all heard the breaking news story on the murders of nine precious souls gathering for the weekly Wednesday 6 PM Bible study.

When I entered the church before the service was to begin, to take my seat amongst the congregation, I was greeted warmly and welcomed by Maxine, the pastor’s assistant. When I told her that I was a rabbi from California, she asked me to wait for the pastor, Reverend Norvel Goff, who was being interviewed by a national news network. Five minutes before the service was to begin, Reverend Goff, the Interim Pastor, a tall handsome man with a purposeful stride, smiled, grabbed my hand and said, “Rabbi, you walk with me in the procession and sit next to me on the pulpit.”

I didn’t have much time to react and like a loyal foot soldier, I filed into line behind him and proceeded up the aisle to the front of the church, as music began playing and everyone broke out into song. A trained cantor in the earlier days of my career, I so appreciate the power of music and its ability to inspire and uplift. Throughout the service, two choirs and musicians had everyone in that sanctuary swaying and rocking on their feet.

When we sat down, Reverend Michelle Frayer, sitting to my right, greeted me warmly and shared that she was one of those who survived that Wednesday in June. I could see the sadness in her eyes, as I reached for her hand to comfort her. The church was filled with regular worshippers and visitors from many parts of our country. During the service Reverend Goff came down from his pulpit and introduced the visitors.

There was a delegation from a church in Ohio and North Carolina. There were guests from New York and Maryland. A minister from a church in Santa Barbara presented Reverend Goff with a hand-made beautiful quilt made by members of her congregation. All of the visitors, like me, wanted to show their solidarity and love and concern for the church and let them know that they are not alone.

Reverend Goff then asked me to share some words with the congregation. Gathering my thoughts as I approached the lectern, I told the congregation that every member of my synagogue and everyone in the Greater Sacramento community has been grieving and standing with them since the horrific event occurred here last June. I told them that when God created us, He created us in His image and that regardless of the color of our skin or our religious faith, we are equal in the eyes of God; we are “all joined at the hip.” The chorus of “Amens” as I spoke was at first startling, but affirming. Rabbis are not used to being “interrupted” during their sermons. I noticed that the members of Mother Emanuel are not shy or inhibited; the interplay between the people and their pastor where “Yes Sir” and “Say it again” and “Amen” was exhilarating.

I then asked the congregation to repeat two Hebrew words after me: “Chazak Ve’ematz.” I explained that at the end of the Book of Deuteronomy, Moses counsels Joshua, “Chazak Ve’ematz — Be strong and courageous.” And that was my message: Two words. Strength and courage. When we are all faced with adversity in our lives, it is finding a way to remain strong and courageous to overcome the challenges that allows us to move forward. I could sense that Mother Emanuel was indeed on that path forward. And then I concluded my remarks by chanting in Hebrew the priestly blessing from the Book of Numbers: “May the Lord bless you and watch over you; May the Lord make His face to shine upon you and be gracious to you; May the Lord lift up His face upon you and grant you peace.” And the congregation affirmed my prayer with a rousing “Amen.”

After the service, as we stood outside the church greeting the members, I asked Reverend Goff if he would allow me to recite a brief memorial prayer downstairs in the social hall where the murders took place. He escorted me down the steps to the very place where the weekly Bible study is held. There is a large cross on a stand with nine engraved nameplates of the victims. The pastor called all who were gathered in the social hall to join us by the cross as I chanted in Hebrew and English our traditional memorial prayer (Kel Malay Rachamim). A visitor had videoed the recitation of the prayer and emailed it to me.

As I chanted the prayer, I mentioned each of the names of the victims: Cynthia Marie Graham Hurd, Susie Jackson, Ethel Lee Lance, Depayne Middleton-Doctor, Reverend Clementa C. Pinckney, Tywanza Sanders, Daniel Simmons, Sharonda Coleman-Singleton and Myra Thompson. May their memories all be for a blessing.

The lasting impression of my Sunday visit to Mother Emanuel is the way in which members of the church have embraced their faith, despite the fact that their lives were changed forever last June. There was no anger. There was no one asking for revenge or pity. The inspiring sermon as Reverend Goff spoke of the church as not comprised of brick and mortar, but rather as a community of people, struck a chord that resonated throughout the pews. And this community of African Americans at this historic church founded by slaves, burned down by racists and rebuilt again, target of a hater last June, is indeed not only a community, but is a shining light to our nation, a nation that must work harder to extinguish the flames of hate and kindle the sparks of love and respect which every member of our global community deserves. 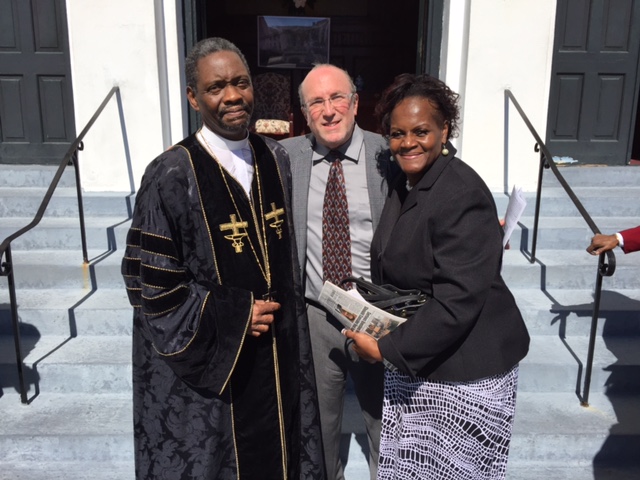